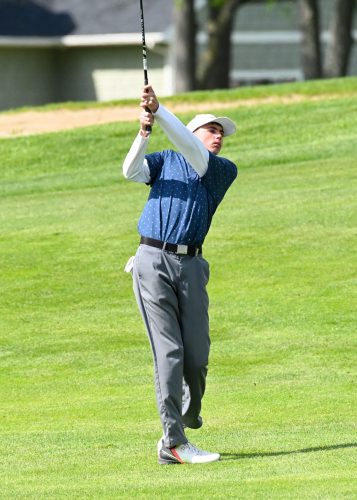 NorthWood’s Kyle Cripe watches his approach on the 18th at Maxwelton Golf Club Saturday morning as part of the Wawasee Invite. InkFreeNews photo by Mike Deak

In a look at the top of the potential Northern Lakes Conference tournament in a couple weeks, Goshen gave a preview of what it hopes to repeat.

The top four teams at Saturday’s Wawasee Golf Invite at Maxwelton all hail from the NLC, led by Goshen’s 336, 12 strokes better than Northridge. NorthWood (351) and Plymouth (356) were right behind, and the host Warriors made a fifth NLC entrant with a 385.

Chase Meyer led the RedHawks and the tournament with a 77, with Northridge’s Tyler Frazier also at 77. Lakeland’s Ben Keil was third at 78 on a tough, windy track on the south side of the Kosciusko County line.

NorthWood’s day was led by an 81 from Earl Williams, who tied for fourth overall. Jon Cripe shot an 87, followed by an 89 from Cooper Wiens, 94 from Kyle Cripe and 96 from Ben Vincent.

Wawasee saw its best scores come from both Brandon Tayagua and Jay Finlinson, both carding 94. Caleb Clevenger had a 97, Aiden Jonsson a 100 and Vaughn Dyson a 101.

A handful of area golfers took part in the Lifestyle Junior Tour stop at Erskine Golf Course in South Bend on Saturday.

Winning age divisions were Kirsten Schrock, taking the college women’s group with a round of 86. Schrock is a NorthWood grad. Olivia Robinson-Gay, a Warsaw freshman, shot a 94 for first in the 14-15 age group.

A pair of Nappanee residents, Caleb Vincent and Riley Kitson, were also in the field. Vincent, a NorthWood middle schooler, shot a 92 to tie for fourth in the 12-13 age group, and Kitson, a NorthWood sophomore, shot 97 to place fifth in the 16-19 age group.