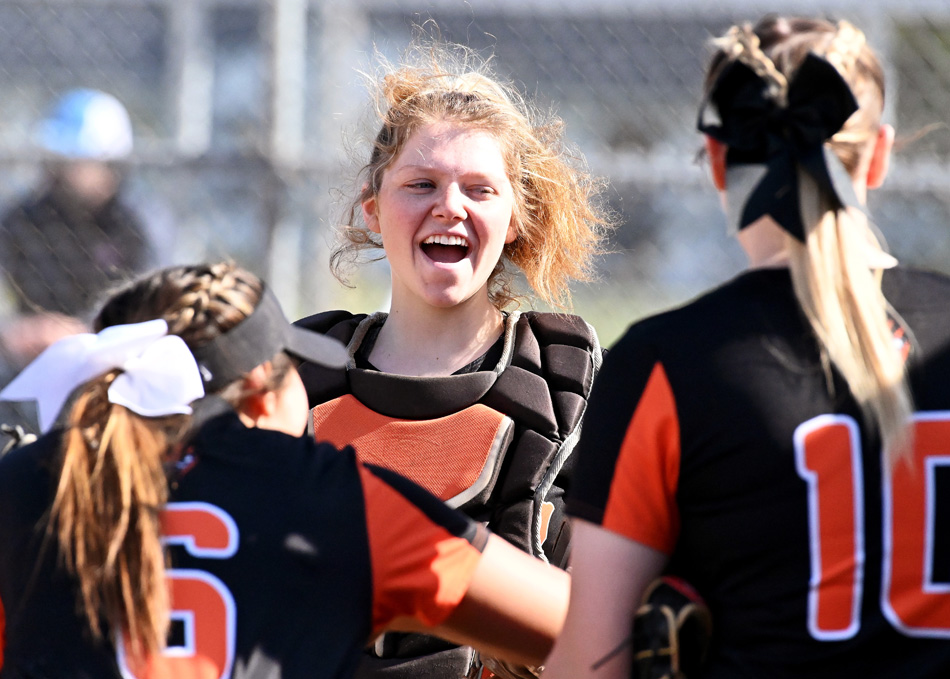 Avery Sleeth and Warsaw softball were all smiles after knocking off Concord Friday in NLC play. InkFreeNews file photo by Mike Deak

NorthWood mounted a huge rally in its final at-bat to get past visiting Plymouth Friday evening.

Trailing 7-4 going into the seventh, NorthWood used an RBI double from Nate Newcomer and RBI single from Isaiah Yoder to cut the lead to one. Kyle Sellers laid down a bunt to lead the bases, and a fielding error tied the score at seven. Gage Gongwer then ripped a walk-off single to end the contest.

Gongwer’s walk-off was his fourth hit of the night and Sergio Lira Ayala, who connected on the ball Plymouth muffed in the game-tying play, had three hits and two runs scored.

Wriley Simons pitched five innings of one-hit ball in relief to get the win for NorthWood (8-3, 4-1 NLC).

The Tigers recovered from a big Concord first inning to grab an NLC win in sunny Tiger Town.

Concord scored all three of its runs in the first, but Warsaw responded with a run in the bottom half, then plated four in the third to take the lead for good.

Joey Springer, Drew McCleary and Sam Justice had back-to-back-to-back RBI singles in that third inning to spark the Tigers.

Springer settled in after the shaky first to toss all seven innings, giving up six hits and three earned but stirking out eight.

A late four runs helped Goshen pull away Friday in the shadows of the Elkhart County Fairgrounds.

Goshen scored two in the first, then matched Wawasee’s only run in the fifth. A four-run sixth inning put the RedHawks over to stay in the top half of the NLC.

Kam Salazar had a solo homer for the Warriors, which were held to just five hits at Phend Field. Ty Brooks gave up just two earned runs in five innings on the hill for Wawasee (7-7, 2-4 NLC).

Ezequiel Moreno had a hit and two RBI to pace the RedHawks. Reece Fisher struck out 10 in the complete game.

Wawasee won the JV game 10-4, led by Daniel Wilson’s three hits and six RBI. Cole Turner struck out 10 on the bump for the Warriors.

It was a quiet night at the plate for the host Vikings Friday night.

Braxton Davis had a double and the lone RBI for Valley, which drops to 1-1 in the TRC and 6-4 overall.

Break up the Trojans, winners of two straight in a win at Culver.

The Trojans put 29 runs on the Cavs in the home-and-home contests, and used two hits and two RBI from Dominic Smith and three hits and two runs scored by Jeremiah Farrell Friday night. Zak Greer added a pair of RBI.

Farrell allowed just one hit and one walk in his five innings of work on the hill for Triton (2-7, 2-3 HNAC).

The Lady Tigers broke open a close game in Dunlap with a huge seventh inning.

The snowball rolled down hill quickly in the seventh, Kali Ousley picking up an RBI single, Lindsay Bradley ripping a run-scoring double and Kendyll Landis pouring it on with a two-run single. The five-run frame broke open the game that was just 2-0 after the third inning.

Tori Tackett had a solid night in the circle, allowing just four hits and one unearned seventh-inning run. Tackett’s 13 strikeouts helped Warsaw (7-3) move to 5-1 in the NLC.

In the JV contest, Concord reigned 14-8 but Warsaw’s Lina Hummitch had two homers.

It was a hit show for NorthWood in a tour de force at Plymouth.

The Panthers clubbed 30 hits and every player in the lineup had at least two hits. Leading the way, again, was Morgan Jenkins, who was 5-6 with two homers, six RBI and five runs scored.

Kailey Martin homered and drove in four, and the trip of Lili Lomeli, Carly Mast and Macy Lengacher all had four hits and combined for seven runs scored.

Mia Wojcik had four hits, including a homer, and drove in two for the Pilgrims.

Ashlyn Brooke worked four innings to get the win for the Panthers (4-7, 3-2 NLC).

Goshen just kept pecking away in garnering a road win at Wawasee.

The RedHawks scored in five of the six innings, including a six-run top of the sixth that spread out the dime. Tyra Marcum tripled and homered, driving in two for the visitors.

Laney Gross and Kiaundra Olson had two hits apiece and each scored a run for the Warriors (2-12-2, 1-5 NLC).

Olivia Stuck allowed just one earned run in three innings for the Warriors, while Marcum had nine strikeouts for the RedHawks.

Grace’s softball team was unable to pick up a win in its final road trip of the season.

The Lady Lancers lost 8-1 and 7-4 at Spring Arbor on Friday.

Grace’s season will end on Saturday. The Lady Lancers will host No. 12 Marian for a 1 p.m. doubleheader at Coach Phil Dick Field. Saturday will also be Senior Day to honor Grace’s graduating class of Taylor Fonseca, Madison Howard, Dori Knight and Britney Young.

In the opener, Grace and SAU seemed destined for a pitchers’ duel. The Cougars held a slight 1-0 lead after three innings.

In the top of the fourth, Grace tied the game. Britney Young singled and eventually scored thanks to an RBI single from Ashley Beckler.

The tie was short-lived, however. The Cougars responded with five runs in the bottom of the fourth, benefitting from an error by Grace.

SAU tacked on two more runs in the sixth for the final margin of victory.

Beckler was 1 for 3 with an RBI, and Young, Carly Ruiz and Madison Bremer all had a hit.

All the scoring in game two occurred in the first four innings. The Cougars maintained their momentum by claiming an early 5-0 lead.

Grace jumped to life in the top of the fourth. The Lady Lancers quickly loaded the bases with one out, and Elena Rolley put Grace on the scoreboard with an RBI single. Cassandra Hayes and Carly Ruiz later had two consecutive two-out RBI singles, slicing the Cougars’ lead down to 5-4.

But just like SAU did in the opener, the Cougars had an immediate response. SAU scored twice in the bottom of the fourth to gain a 7-4 cushion.

Grace had a baserunner in the fifth inning (double from Young) and the seventh inning (single from Jaden Cardoso), but the Lady Lancers were unable to score either runner to end the game.

Young finished 2 for 3 with a run scored, and Ruiz was 1 for 1 with two RBIs. Rolley had 1 hit, 1 run and 1 RBI, Beckler had a hit and a run, and Jessica Kaurich walked and scored.

Knight struck out four batters in six innings without a walk from the mound.