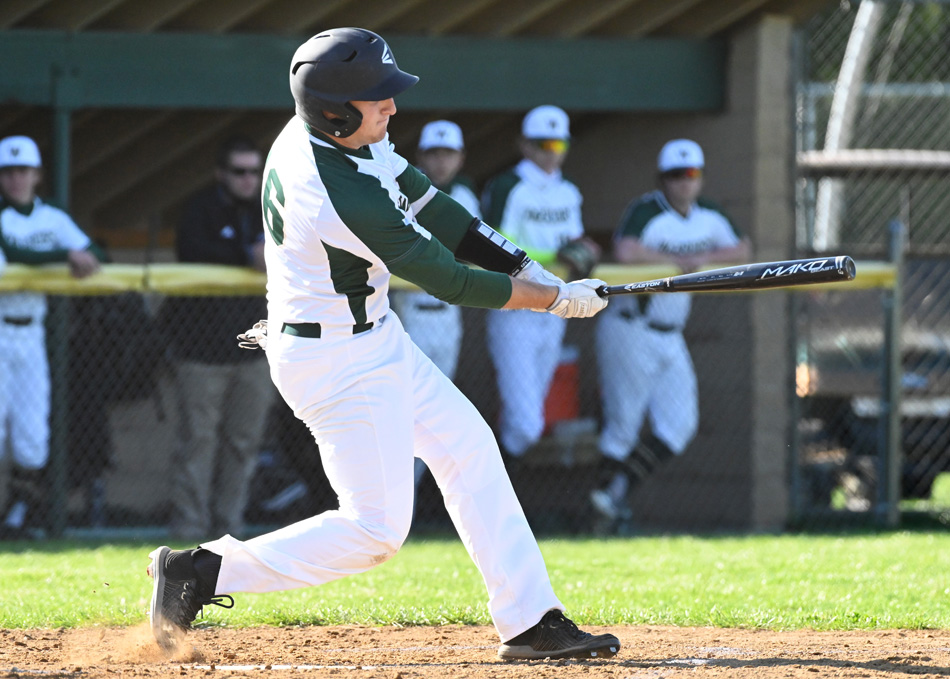 Parker Young and Wawasee swung away Tuesday in a blowout win at Bethany Christian. InkFreeNews file photo by Mike Deak

A slugfest broke out in Waterford Mills Tuesday afternoon.

The Warriors and Bruins combined for 30 hits, Wawasee (6-6) responsible for 20 of them. Grant Brooks had a career night, slugging two homers and driving in a personal best nine runs. Brooks and Kam Salazar also scored five runs each, Salazar adding a triple among his four hits.

Ethan Boyer had two hits and three RBI for the Bruins.

A total smoke show for the Warriors, which had no mercy on the Trojans (0-7).

Valley fell to 6-4 overall with the loss. Complete stats were not made immediately available.

It was all Raiders Tuesday in NLC play in Nappanee.

Morgan Jenkins was 2-for-3 with a run scored for the Panthers (3-7, 2-2 NLC), but otherwise Robinson held NorthWood to just five hits.

There wasn’t much going right for Triton Tuesday in a loss to North Miami.

The Trojans (3-7) mustered just three hits off Ellie Musselman, who struck out nine in the five-inning contest.

Leading the victory at the plate were Musselman, Addison Miller and Lauren Duncan, who totaled nine hits and 10 RBI.

The Class 2-A No. 3 Panthers showed why they are the top northern outfit in the class with 17 runs and 16 hits against a potent Valley side. Eleven Panthers had at least a hit, and both Hailey Gotshall and Hailey Cripe scored three runs apiece.

Corinna Stiles had Valley’s (6-6) only hit. Gotshall struck out 13 and walked just one on her end of the pitching performance.

Grace’s softball team could not keep up with No. 7 Indiana Wesleyan on Tuesday, losing 11-0 and 11-3 at Coach Phil Dick Field.

Grace’s bats were quiet in the first game; the Lady Lancers were held to two hits, a single in the first inning from Jessica Kaurich and a double in the seventh from Jaden Cardoso.

The Wildcats were quiet until the fourth inning, erupting for 10 runs between the fourth and sixth innings to end the game early due to the run rule.

In the second game, IWU jumped ahead early with five runs over the first two innings.

The Lady Lancers did not have a hit until the fourth inning when Kaurich’s single gave the team its first baserunner.

Grace drew two walks in the fifth but was unable to push across a run.

The Lady Lancers faced an 11-0 deficit entering the bottom of the sixth, needing four runs to escape a run rule. Grace nearly pulled off the rally it needed.

Trinity Christmas and Jessica Kaurich reached base with two outs. Britney Young and Laikyn Lowe had back-to-back RBI hits to put Grace on the scoreboard.

Ashley Beckler then singled to score Young to make the score 11-3. Another walk loaded the bases with two outs, but Grace’s final batter struck out to end the game after six innings.

The Lady Lancers are home again twice this week. On Wednesday, Grace will host Taylor at 1 p.m. On Saturday, Grace hosts Marian at 1 p.m. for the team’s Senior Day.