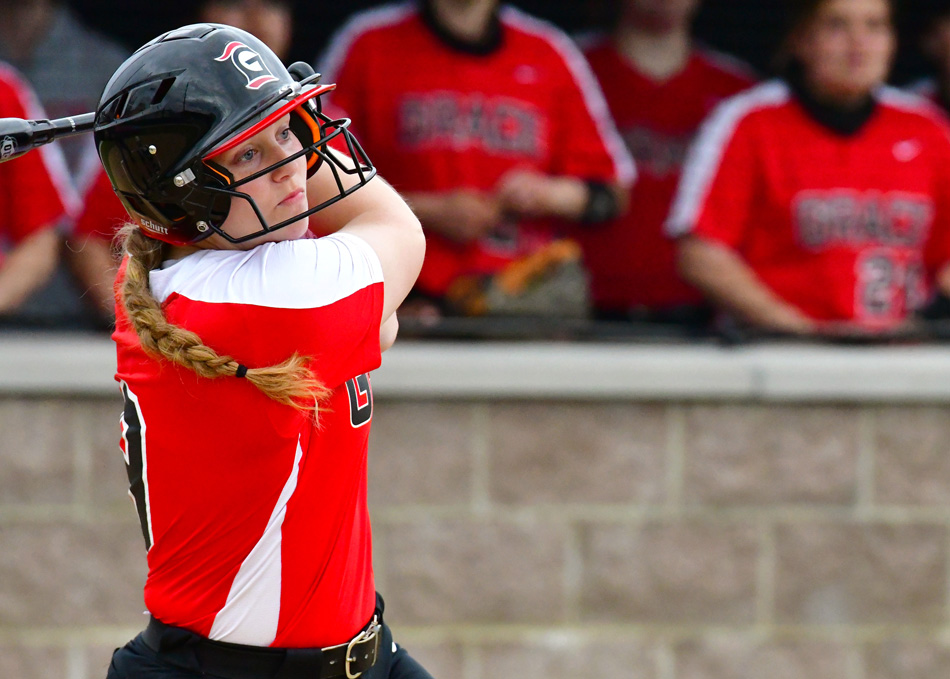 Jacob Raasch was dominant on the hill as the Panthers shut out the Warriors in Nappanee.

Raasch allowed just two hits and three walks in the complete game shutout, striking out six. Raasch had plenty of help on offense, with Logan Balasa tripling among his three hits and two RBI and Sergio Lira Ayala adding two hits and two runs scored. Kyle Sellers added a pair of RBI in the contest for NorthWood (6-2, 2-0 NLC).

Triton couldn’t hold on to an early lead in a loss to the Warriors Friday evening.

A four-run second for the Trojans had Big Blue up 4-1, but that Winamac chipped away with four runs in the next two innings, then patched on two more in the sixth to seal the win.

Russell Compton struck out 12 to lead the Warriors.

Jacob Pitney and Evan Briles each had an RBI for Triton (0-5, 0-2 HNAC) and Zak Greer added three hits. Dominic Smith struck out 10 in five innings for Triton.

Grace’s baseball team began its series at No. 19 Indiana Wesleyan on Friday.

The Wildcats won the opening doubleheader with a pair of wins (14-3, 12-5) over the Lancers. The four-game series will end on Saturday with the second doubleheader starting at 1 p.m.

Chris Griffin demonstrated a lively bat on the day, flexing his offense in the first inning. Griffin launched a solo home run to give Grace an early lead.

The Wildcats grabbed the lead with a five-run third inning and never looked back. IWU added three runs in the fourth and six in the fifth to pull away for good.

Alex Rich and Braden Compton plated later in the game for Grace, but it was not enough in the 14-3 defeat.

Dalton Turner hit 2 for 3, and Isaiah Herbster recorded a hit and a stolen base.

The Wildcats’ strong offense carried into the start of the second game. IWU began the game with 10 runs over the first two innings, sparked by a double, a triple and a three-run homer.

Grace had seven hits in the contest, but the Lancers could not keep up with the Wildcats’ efficient attack. IWU scored 12 runs on 12 hits to secure the day’s sweep.

Griffin hit another solo home run in the fourth inning, improving his home run total to six on the season. He finished the game batting 2 for 3 with two RBIs and a run.

Patrick Danforth hit 2 for 4 with two runs and an RBI from the leadoff position, and Jeff Pawlik drove in two runs.

David Melendez and Jaron Mullet each had a walk and a run scored.

Brooke tossed a two-hitter, striking out eight. The Panthers (3-5, 2-0 NLC) took the lead in the seventh on an RBI triple from Morgan Jenkins and a Wawasee error for the eventual winning run. Allen gave up six hits and struck out seven in her side of the complete game performance.

Wawasee (1-8-1, 0-3 NLC) got a run back in the seventh, Kathryn Flannery singling in the tally. Brooke then got a strikeout to end the contest.

Jenkins had three hits in the contest and Kiaundra Olson added an RBI for the Warriors.

Tori Tackett was nearly flawless as the Tigers won its fifth straight Friday night in the shadows of the Blueberry Festival grounds.

Tackett gave up just one single in the third inning, otherwise mowed down Plymouth. Tackett didn’t allow a ball out of the infield, recording 10 strikeouts in the process.

While Tackett was rolling, Warsaw (5-2, 3-0 NLC) didn’t get its offensive push until the fifth, when it scored five, then plated four in the sixth to earn enough for the dime.

Avery Sleeth had a solo homer, Tackett drove in three and Kalista Ousley had two hits and two RBI.

Grace’s softball team was unable to produce a win on Friday against rival Bethel.

Bethel seized control of the opener early with a pair of crooked innings. The Pilots catapulted in front 7-0 after the top of the third, putting Grace into a hole it could not climb out of.

Grace did manage to score in the bottom of the third with an efficient outburst. Madison Bremer led off the inning with a double, and Jeri Ellis followed with a double of her own to drive in Bremer.

Grace only managed one more run, however. In the bottom of the seventh, Britney Young had another leadoff double. She came home thanks to a two-out single by Olivia Hess.

The second game was filled with back-and-forth action. Each time Grace scored, Bethel seemed to have an answer prepared.

The Lady Lancers scored twice in the bottom of the second to take the lead. Laikyn Lowe started a two-out rally with a double, and Hess brought her in with a single. On the next at-bat, Elena Rolley doubled to give Grace a 2-0 lead.

The Pilots countered with a four-run third with all four runs coming on home runs. But Grace tied the game with two runs in the fourth thanks to RBIs from Rolley and Lauren Byrer.

Bethel tried to pull ahead with three runs in the top of the fifth, but Grace had no trouble keeping pace.

Jaden Cardoso reached base with a single, and Britney Young promptly parked a two-run homer to center field.

With two outs in the inning, Lowe tied the score with one swing, belting a solo home run to tie the game 7-7.

Unfortunately for Grace, Bethel had one major inning left. The Pilots poured in nine runs in the top of the sixth. The Lady Lancers did not have a response in the bottom half of the frame, and the run rule ended the game after six.

Hess finished 2 for 3 with a run and an RBI, and Young finished 1 for 2 with two runs and two RBIs.

The Lady Lancers are scheduled to play at Mt. Vernon Nazarene on Saturday for a 1 p.m. doubleheader.