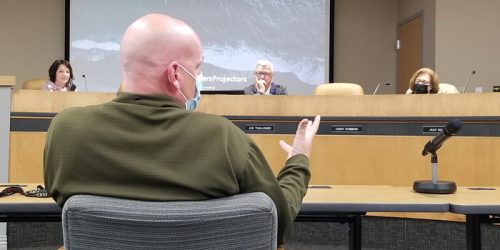 WARSAW – The luxury of not having to pay for trash disposal, recycling and yard waste services in the city of Warsaw appears to be coming to an end.

City Council began deliberating Monday night, April 19, whether to establish a trash fee after a council committee recommended it use a phased-in approach.

Mayor Joe Thallemer introduced a proposal that would establish a monthly fee of $8 on July 1.

The fee would increase annually until it reaches $12 in 2025.

Individual apartment units in buildings with no more than four units will be part of the hike. Larger apartments already use commercial services.

While nobody desires to establish a new fee, there seems to be ample support for the proposal, which will be formally considered by council in May. No votes were taken on the issue Monday.

The city currently picks up trash, recycling and yard waste and permits residents to have a large item, such as a love seat, picked up for removal with their trash each week without charge.

Thallemer said 80 percent of communities use a trash fee and the average is upward of $14 a month.

The city continues to lose tax revenues through the state’s circuit breaker policy that limits the amount of money municipalities can collect.

The city lost 3.7% of the revenue for 2020 to the circuit breaker and those percentages are expected to rise in the next two years, Thallemer said.

“We can’t continue to watch these revenues decline without attempting to do something.”

The city estimates the services cost about $915,000 per year, and the proposed $8 monthly fee would help cover about half of that, Thallemer said.

Three council members who studied the issue in recent months all reluctantly appear to support the plan.

Councilman Jerry Frush said he doesn’t want to establish new fees, but said it’s something that has to be done.

Councilman Michael Klondaris said he initially opposed the idea but said the facts are clear.

Klondaris said they quickly dismissed the idea of seeking to contract the service.

Councilman Josh Finch said after reviewing the situation, it became apparent that the change is necessary.

Numerous council members applauded the work and customer service from the street department.

Local commercial trash service can cost close to $25 per month for unincorporated areas.

The ordinance also includes a provision to ban residents from using plastic bags for yard waste after July 1.

Council will hear another presentation on May 3 before considering the first of two votes on the issue.