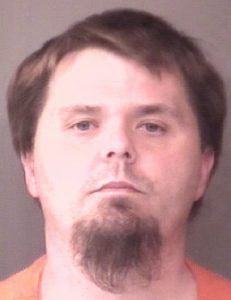 WARSAW — A man was recently arrested after allegedly stealing more than $2,000 worth of merchandise from Stock+Field.

John Robert Walsh, 38, 1310 W. Marion Ave., Marion, is charged with theft and theft with a prior conviction, both level 6 felonies; and theft, a class A misdemeanor.

On April 14, 2020, a Warsaw Police officer went to Stock+Field regarding a theft report. Upon arrival, the officer met with a store employee.

However, the man purchasing the items was not an approved user of the account. Surveillance footage of the purchase also showed the man using the account was not the account’s listed user. The total value of the items purchased was $2,294.06.

On April 20, 2020, a Warsaw Police detective uploaded an image of the suspect onto the police department’s Facebook page for assistance with identification. The detective was later contacted by a Marion Police officer, who said he believed the suspect was Walsh.

The Marion Police officer provided a BMV photograph of Walsh to the Warsaw detective. The photo looked similar to the suspect shown on the store’s security footage.

On April 26, 2020, a Walmart employee contacted central dispatch and said a man that looked similar to the photo uploaded on WPD’s Facebook page was at Walmart. Officers arrived and told Walsh to contact the Warsaw Police detective for an interview.

On May 4, 2020, Warsaw’s police chief forwarded an e-mail from Walsh to the detective; the e-mail was received on May 3, 2020. The e-mail states Walsh was willing to meet with the detective. However, multiple attempts to contact Walsh failed.

On June 12, 2020, the detective sent a text message to the phone number belonging to Walsh. The detective received a message from someone saying he was Walsh’s relative. The message indicated Walsh had moved to Los Angeles, Calif., and the person offered to pay the loss Stock and Field incurred due to the theft. The detective said that would not be an option.

Walsh was previously convicted of theft in Miami County in February 2017.

For this case, he was booked in the Kosciusko County Jail on March 31, with a $7,400 surety and cash bond.