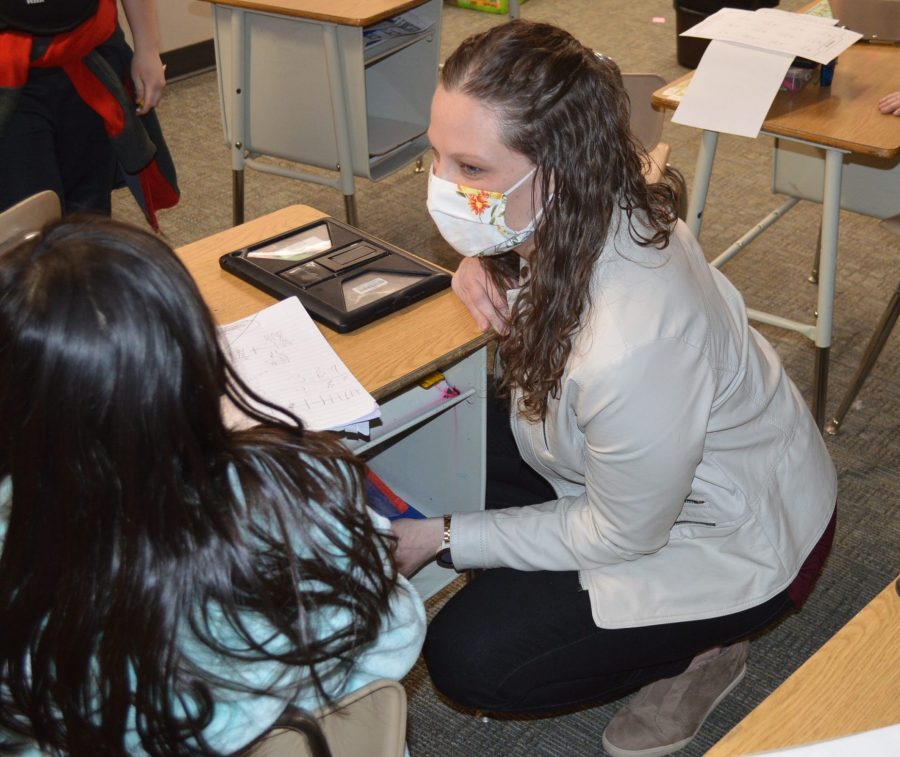 Crystal Kreider visits with a student in one of the third grade classrooms at Eisenhower Elementary School in Warsaw. InkFreeNews photo by Tim Ashley.

WARSAW — Sometimes going through difficult and stressful circumstances can polish the rough edges off a person and give them a new perspective on life.

Only a few months after graduating from college and newly married, Crystal Kreider was working as a teacher in a school in one of the roughest areas on the south side of Chicago.

For some background information first, Kreider, now a dual language immersion coach at Eisenhower Elementary and Leesburg Elementary for Warsaw Community Schools, grew up in Milford and was home-schooled through the fourth grade. For grades five and six, she attended Warsaw Christian School and then Lakeland Christian Academy for grades seven to 12, graduating from high school in 2005.

She took a year off from schooling and worked as a point of sale supervisor for Kohl’s in Warsaw, helping to set up the new store at that time. Beginning with the fall of 2006, she began attending Indiana Wesleyan University as a dual major in elementary education and Spanish education.

Kreider said she decided to become a teacher largely because of the influence of teacher Kim Rickelman, who was Kreider’s sponsor teacher at LCA for grades seven to 12. “She was a history teacher and I really got to know her,” Kreider said. “She made it fun and cared about the kids. She was really interested in our lives.

“I decided it was either education or interior design. I didn’t want to take an art class because I couldn’t draw very well.”

She graduated in December 2010 as a double major from IWU. During her time at the university, she was able to study abroad in Seville, Spain, for one summer, a requirement for her Spanish education major. She was also a student teacher in Costa Rica and Kokomo.

After graduation, she came back to Warsaw and worked as a paraprofessional for one semester at Jefferson Elementary in Winona Lake and also worked again at Kohl’s. She was engaged to Mike Kreider of Columbia City in January 2011, whom she had met in June 2010. The two were married July 30, 2011.

Mike was still attending school in Chicago so the couple moved there after being married. Crystal took a job teaching Spanish to eighth graders at Marquette School in Chicago’s inner city. One of her students was shot and killed during gang violence.

“It was really hard for me personally and professionally,” Kreider said of teaching there. “There were no resources or supplies. It was a turnaround school and under performing, so they let all of the teachers go.”

She didn’t finish the school year at Marquette and moved back to Indiana to live with her parents while Mike was still in school. Moving back was a hard decision to make “because I had started connecting with the kids” in the Chicago school.

Then in February 2012, one of those unexpected and tragic events occurred when Kreider was involved in a car crash on an icy road. Her car was T-boned and as a result, her pelvis was shattered and she had several broken bones and injured ribs.

After several surgeries and recovery, a few months later she found another teaching job in Chicago, this time at Smyth School in the West Loop. There was no heating or air conditioning in the rooms and the experience proved to be trying emotionally and mentally for her, so she decided to quit teaching in March 2013.

Although both teaching experiences in Chicago were difficult to deal with, looking back Kreider can say they helped shape who she is today. “It gave me a new perspective on things,” she said, noting inner-city Chicago is a much different culture than being home-schooled or attending a private school in a small town.

Later she became the parent liaison at Leesburg Elementary and then started teaching fifth grade at the same school in the fall of 2013. With the exception of one year teaching sixth grade, she remained in that position through the 2019-20 school year. Last spring she was asked to consider applying for an instructional coach position and accepted during the summer of 2020.

She splits time between Eisenhower and Leesburg elementary schools and goes in and out of classrooms working with teachers in the dual language immersion program. She also helps where needed at Eisenhower, such as with the response to the intervention team.

Kreider said she misses teaching, “but I love this role; it’s what I was made for.”

She is currently working on her master’s degree online through Indiana University in literacy culture and language education.

Crystal and Mike, who works at Robinson Construction in Warsaw, have two sons: Luke, 6, a student at Leesburg Elementary; and Keagan, 2, who will turn 3 in April. A third child is on the way.