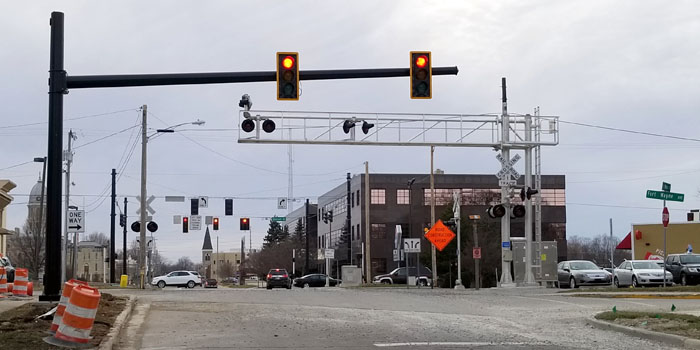 Here is the view of Main Street looking west with the new set of traffic signals.

WARSAW – Three traffic signals – all for westbound motorists – have been installed and activated along Hickory Street in Warsaw in an attempt to decrease the chances of vehicles being trapped on the Norfolk Southern railroad tracks.

The new traffic signals on Main, Center and Market streets came online in recent days and have caught some motorists off-guard.

The move is an effort to prevent westbound motorists on those streets from getting backed-up on the railroad tracks which run along Hickory and is a short distance from North Detroit Street (and SR 15).

The additional alignment of signals so close to other traffic lights is part of the Indiana Department of Transportation’s effort to improve safety, said Hunter Petroviak, public relations director for INDOT’s northeast district.

“It is a pretty rare technique to control traffic through that double-light situation,” Petroviak said.

The new signals along Hickory are part of a bigger, complicated series of improvements along North Detroit and the north-south tracks.

Traffic signals at two intersections to the west on Center Street have also been replaced and upgraded.

Reaction on Facebook was one of surprise for numerous motorists, some of whom said they almost ran through one of the new red lights after not realizing they were there. Some thought the idea of new stoplights so close to Detroit Street seemed odd.

But on Main Street, two motorists who were stopped for a train in front of the new stoplight took the changes in stride.

The momentary train delay gave both drivers a chance to talk about it.

“It’s fine with me,” said Ann Zachary, who was driving a yellow Jeep.

She said she was surprised they installed the signals, but seemed more concerned with the length of trains.

“They need shorter trains,” she quipped.

She said she still prefers to see an underpass or overpass, an idea that is no longer under consideration.

Steve Clason, in line behind Zachary, said it was the first time he came across the new traffic signal.

“Seems like a good idea to keep the tracks clean,” Clason said.

District 2 City Councilman Josh Finch said he was caught off guard by the changes, which are inside his district. He surmises that there was not a lot of warning from the city because it was primarily an INDOT project.

He said residents he talked with were more confused than upset. After explaining the rationale, most tended to understand, he said.

He drove through the lights several times to experience how well they were synching.

“I personally didn’t think it was that much of an impediment to your standard traffic routine,” Finch said. “I’m sure there is some data behind it that makes a lot of sense …  I do think it will make those intersections a little more safe especially when there is a train nearby.”

Months of construction around those three intersections on North Detroit and to the west are part of a $2 million upgrade in traffic signalization that will tie in with nearby north-south railroad crossings with the goal of improving traffic flow.

Newly upgraded railroad crossings are supposed to work in sync with nearby traffic signals to improve flow.

On top of that, the city has been renovating a three-block stretch of Hickory Street, which overlaps some of the north-south tracks.

Previously, the mix of two-way traffic and the demand for parking along Hickory created problems and confusion.

Changes on Hickory came after at least one vehicle was parked too close to the tracks and was struck by a train. Another vehicle was struck this winter in that same area, but that was blamed in part on a buildup of snow plowed along the curb.

As a result, Hickory is now one-way where it intersects with Center Street. Drivers headed west can turn north on North Hickory or South on South Hickory. The city is also limiting some parking along Hickory while adding signage to make it more clear.

Construction on the Detroit Street intersections should be finished in April, Petroviak said.

City Planning Director Justin Taylor acknowledged the short corridor has had some collisions involving trains and vehicles, “so we are looking forward to seeing how the new signals INDOT has implemented will improve public safety in the future.” 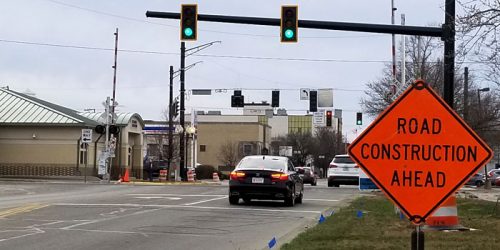 Here is the view of Center Street looking west with the new set of traffic signals. 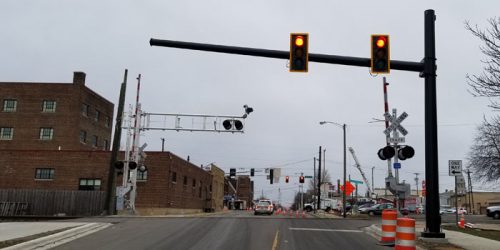 Here is the view of Market Street looking west with the new set of traffic signals. 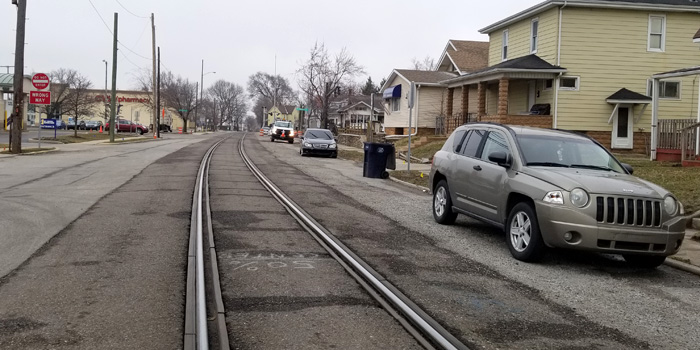 Hickory Street is now one-way – a move aimed at providing train traffic with more space. In this instance, parking is reserved for the area east of the tracks while the portion to the west is intended for motorists headed south. InkFreeNews photo by Dan Spalding.