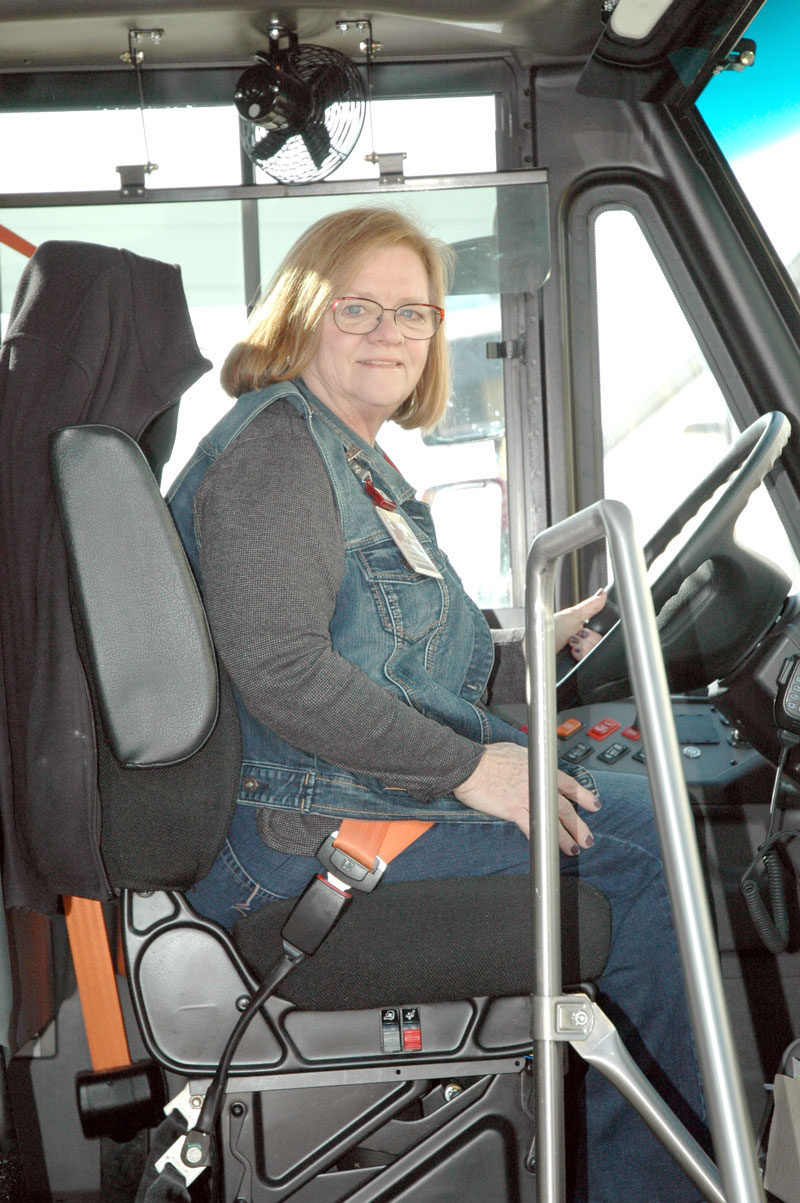 Linda Haughee greets her charges with a smile. The safety of the children is always foremost on her mind. Photo by Ray Balogh. 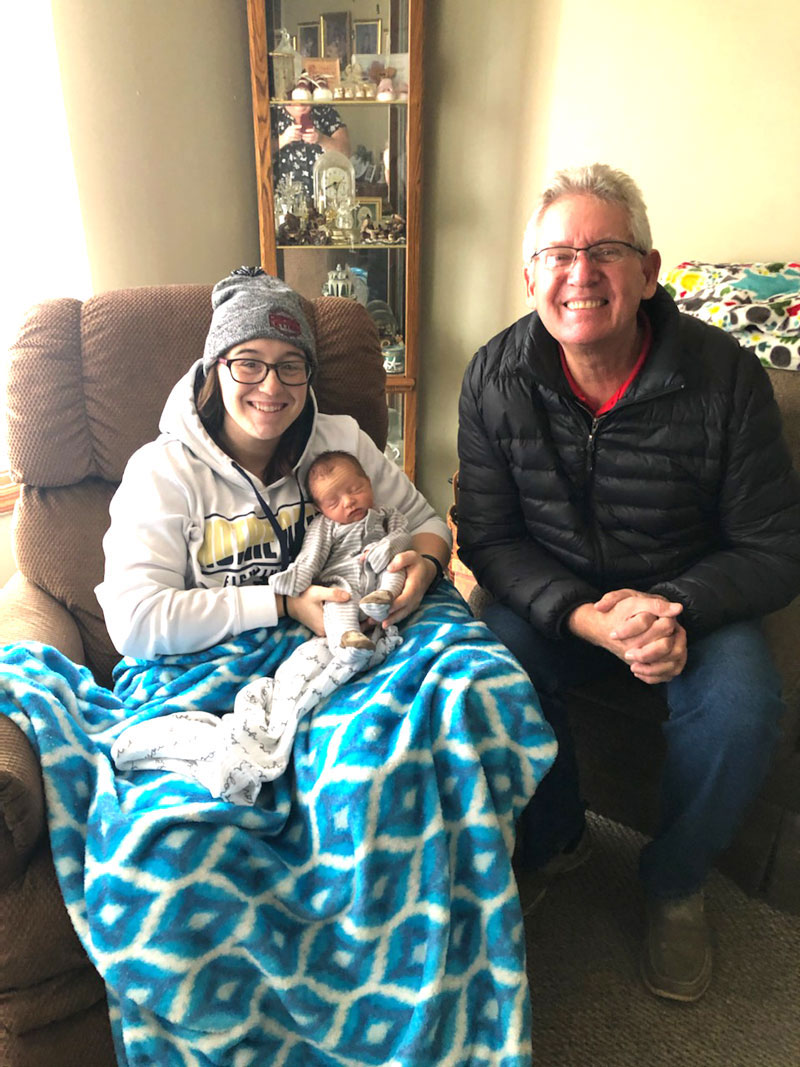 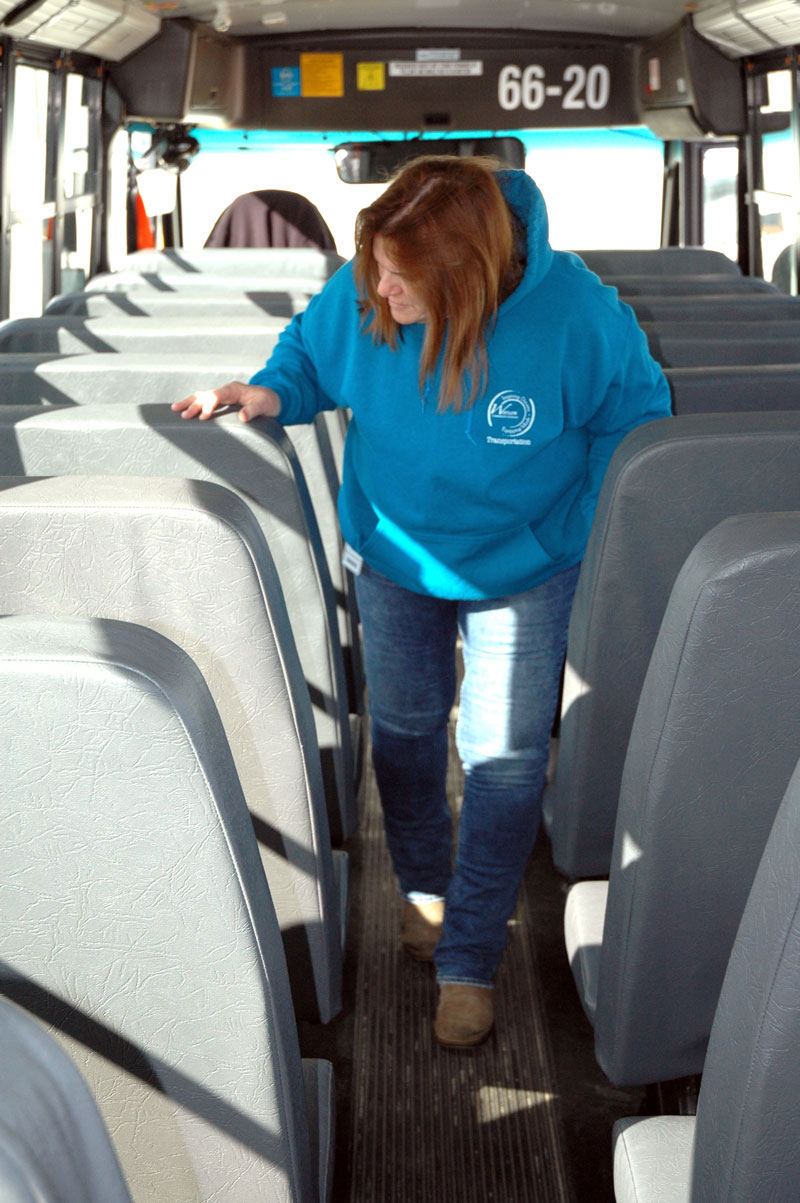 Jackie Clase, a trainer and bus driver for the Warsaw school system, demonstrates the day’s final task of checking the seats for children after the route. Drivers are required to conduct the checks and press a button at the back of the bus to deactivate an alarm system. Photo by Ray Balogh. 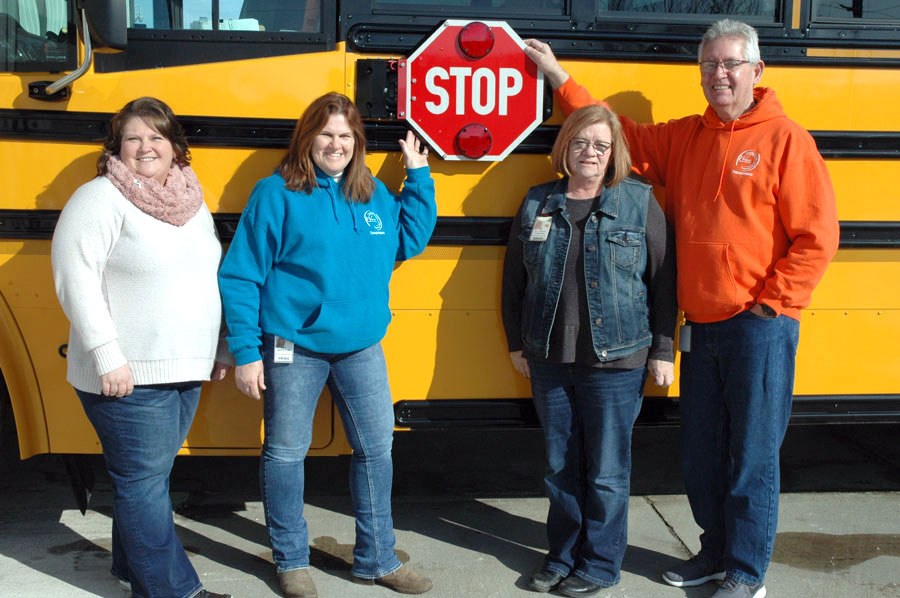 Editor’s note: School bus drivers provide a vital service to the children and their families in the community. Unfortunately, word count limits do not permit a full tribute to each of the bus drivers throughout Kosciusko County. The Papers Inc. offers a heartfelt hat tip to all the bus drivers, transportation directors and support staff of the Tippecanoe Valley, Triton, Warsaw, Wawasee and Whitko community school systems.

WARSAW — As Kosciusko County schools resume in-person classroom instruction, once again “the wheels on the bus go ’round and ’round.” 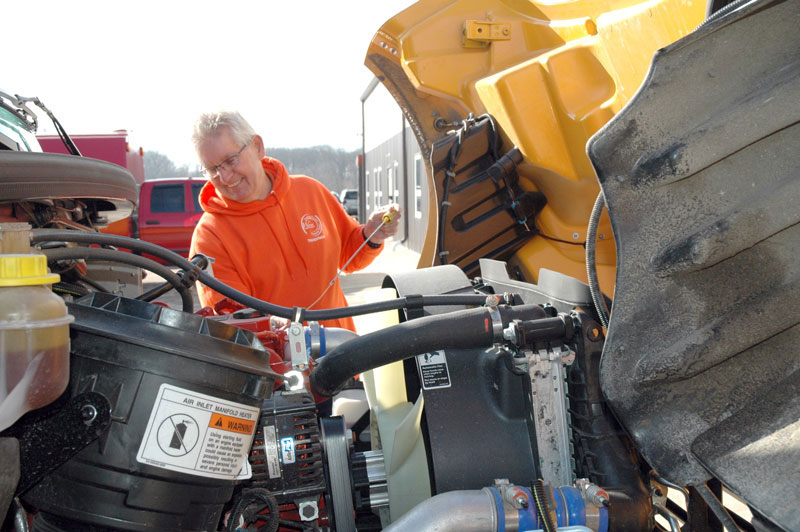 And steering those wheels is a small army of heroes who don’t wear capes, dedicated community servants known as bus drivers.

Then, twice daily, they perform the tandem tasks of muscling their 14-ton eggshell along city streets, county roads and state highways, and shepherding incalculably valuable cargo, little lives who give their full faith and trust to the driver when they step on the bus.

All the while they maintain constant 360-degree vigilance for irresponsibly distracted or inexcusably self-important drivers who blow through flashing stop arms.

The drivers invariably do this without harm or incident, day after day, school year after school year, and like a comfortable shoe that is taken for granted, they go unnoticed and unsung. Imagine their gratification in receiving even a small token of appreciation delivered by one of the precious little souls they transport every day.

Linda Haughee is in her 26th year of driving for Warsaw Community Schools, a profession her husband suggested when their children started school. Her favorite part of the job was “having my summers off, so I was home when my kids were home.” Now a grandmother, she noted she is transporting “a second generation of kids on my route.”

Gene Farrar, whose name tag carries the term of endearment his students gave him, “Mr. Gene,” started his 12th year this month.

His connection with the students goes far beyond sitting behind the steering wheel. “One of my first students 11 years ago had a child a week ago and they invited me to their house to see the baby, so when I finished my route, I went over there. She sat in seat four on the bus the entire time she was with me.”

Trista Clevenger is a relative newcomer to the Warsaw bus crew. She trained for the job 2 1/2 years ago and said “the most surprising thing was how extensive the training was that goes into being a driver.”

She added, “The most challenging aspect of the job is earning the respect of the kids, and the most rewarding is the relationship you develop with the kids and parents.”

Jackie Clase, along with Farrar, is one of the school system’s trainers. She’s “working on 32 years” in the profe

“When I first started we had gas buses and they were stick shift. They had just transferred from horse and buggy,” she quipped.

“All of our equipment was manually operated, even the stop arm. We had a VHS camera in a box above the driver’s seat and you hoped you had it aimed correctly. Now all the buses

are diesel automatics and the newer ones have six to eight cameras.”

The new technology, however, does not prevent the dangerous actions of other drivers.

“When I first started, someone running through the stop arm was rare,” said Clase. “Now it’s an everyday occurrence,” she said, recalling an incident where “one guy passed me on my right-hand side. I shut the door just as a child was stepping off the bus to keep him from getting hit.”

The drivers never stopped their service to the students, even during the pandemic. When the shutdown started last March, the drivers, working with the schools’ food services, transported close to 1,000 meals a week in two-person team deliveries around the district.

Additionally, the 43 buses equipped with Wi-Fi parked in designated areas throughout the county, such as mobile home communities, where wireless signals are spotty, so students could complete their e-learning. “We sent drivers to areas where they knew the students and could keep in touch,” said Mark Fick, director of transportation. “We’re very proactive in the community.”

Bus drivers need administrative support, and the Warsaw contingent gets it in spades from Fick. He stepped into the job in March 2018 after retiring from a 24-year career in the U.S. Army.

“Dr. David Hoffert, our superintendent, told me, ‘Get them to school so I can provide them a sanctuary,’” Fick said. “I promised, ‘I won’t let you down.’”

And he hasn’t. He dedicated himself to providing his drivers with “equipment they didn’t have before” and instilled a superlative sense of professionalism in the department. He made himself approachable to them. “It was something I learned about leadership in the military. You have to be visible. My drivers see me every day.”

He further cemented camaraderie by providing sweatshirts, hats, gloves and other clothing with the department’s logo and an amusing “This is how we roll” graphic. Hot dog, taco chip and popcorn machines are staples in the drivers’ classroom, which doubles as a lounge and lunchroom.

His leadership so skyrocketed employee morale that “other districts call me and ask how we are doing it,” he said.

“This job is remarkable. I am proud of every single driver and support staff, and they are proud of this community and what they do.” 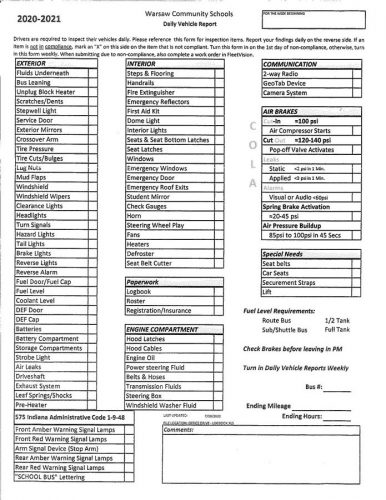