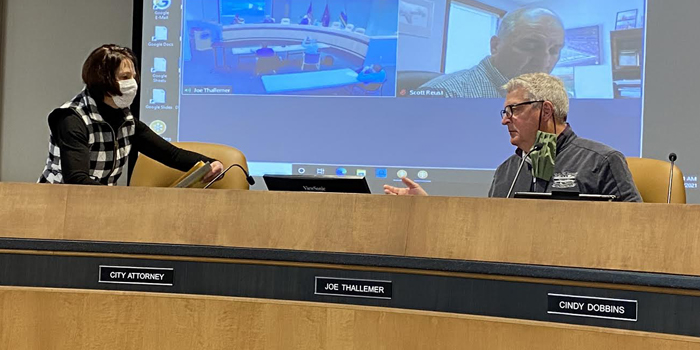 Warsaw Clerk-Treasurer Lynne Christiansen hands a bid package to Mayor Joe Thallemer during the city’s Board of Public Works and Safety meeting on Friday, Feb. 19, at City Hall. The mayor opened bids for traffic signals and a Pike Lake shoreline restoration project during the meeting. InkFreeNews photo by Leah Sander.

WARSAW — The Warsaw Board of Public Works and Safety has OK’d the hiring of an engineering firm to study options for reconstructing US 30.

The city and county are still trying to determine the best path through the county for the proposed limited-access freeway from Valparaiso to the Ohio state line.

The city study will look at 8.7 miles of the highway from North Fox Farm Road to South CR 450E. According to the agreement signed, the study will do an “evaluation of up to 2 routes for realignment of a US 30 freeway away from the existing US 30 corridor. Development of the alignments will include consideration for existing residential and commercial properties, as well as environmentally sensitive areas, such as wetlands and streams.”

The study also will do an “evaluation of the existing US corridor through the City limits to determine impacts to local road networks and access to commercial and residential properties. This evaluation will include consideration for interchanges at County Road N 150 W, Anchorage Road, Parker Street, Center Street, and County Road S 250 E.”

Community Development Director Jeremy Skinner said the study is “kind of co-aligning with what the state is doing” in their study, which was announced earlier this week.

“I think an important part of this is … the city … and the county, we want to make sure that we are not blind to any red flags and with all due respect to all of our staffs, we feel like it’s important to engage professional engineers in doing these types of projects and just give us some oversight and make sure we’re not missing something,” said Mayor Joe Thallemer, who sits on the board of works.

Thallemer is also the president of the US 30 Coalition, which represents each of the seven counties that stretch the length of the road from Fort Wayne to Valparaiso.

Board Member Jeff Grose inquired about the county’s participation with the study.

“As far as the county’s concerned, yeah, I think we are absolutely working with the county,” said Skinner.

“To give you an example, If this were to come back and there’d be a few red flags on this isn’t possible or that’s not feasible, then we would have conversations with the county about what other options there are that would affect them more than us,” Skinner continued.

Both Skinner and Thallemer talked about bringing the issue before the public again. Thallemer said after the meeting there would be at least one public forum on the issue hopefully later this year.

One is for traffic signals in the city and the other is to help restore the shoreline along Pike Lake.

The board tabled its vote on making a decision on which vendors to go with as both Street Superintendent Dustin Dillon and Stormwater Utility Coordinator Ryan Workman said they’d like to consult with City Engineer James Emans for his input. The board plans to vote on the bids at its next meeting on Friday, March 5, at City Hall.

The companies and bid amounts were as follows:

That’s for them to put new power poles headed north from the northwest section of Canal and Detroit streets.

“This easement had potential conflicts with future visioning that we had for Central Park, so I had them work up a secondary document that said they would potentially relocate that infrastructure if needed,” said City Planner Justin Taylor. “So in the future, if we were to develop that gas station that we purchased to expand the park, we would be able to do that without additional cost to the city.”