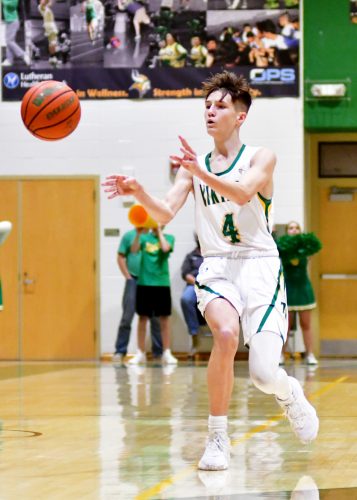 Mishawaka captured its half of the Northern Lakes Conference title by knocking off the Panthers Friday night in The Cave.

The Cavemen finished 6-1 in its inaugural season in the NLC, matching Warsaw to share the conference title. In its quest, the Cavemen (13-2) led by as many as 19 in the fourth quarter. NorthWood would get within nine on two occasions, but got no closer.

Trent Johnson led all scorers by going 7-12 from the field en route to 21 points. Maddux Yohe added 17 points for the Cavemen.

After a sluggish first half, Valley turned on the jets in the second half to punctuate its final Three Rivers Conference matchup.

With just a 16-11 lead at the half on the road, Valley outscored the Warriors 16-3 in the third quarter and outscored the shots by 18 in the fourth quarter.

Valley (6-12, 2-7 TRC) made nine more threes than North Miami, with both Paul Leasure and Riley Shepherd both making three of them. Leasure finished with 11 points, Shepherd 10 points and Brendyn Stump also had 11 points.

Drew Hogan was a one-man wrecking crew for the host RedHawks Friday night.

Hogan scored 18 of his game-high 23 points in the second half and put together a 14-point run on his own, to where he outscored Wawasee on his own 14-4. In that stretch, Goshen went from losing 29-27 to leading 41-33. Hogan added seven rebounds, five assists and a steal in the win.

Wawasee (8-10, 1-6 NLC) had three players reach double figures in scoring, led by 16 from Keaton Dukes, and 11 each from Collin Roberson and Caden Welty. The remainder of the Warriors, however, went 2-9 from the floor in their five combined points.