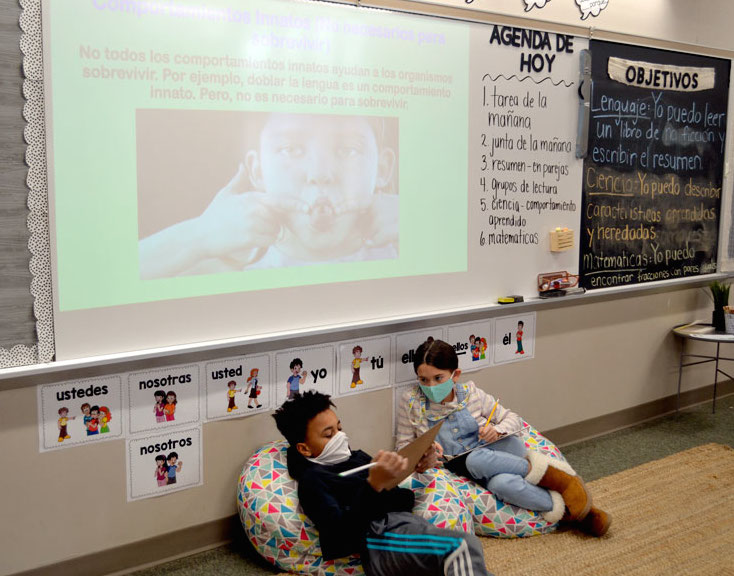 As students in the Dual Language Immersion program at Eisenhower Elementary School, Cubo Kateule, left, and Kendall Schuman spend half the school day in Spanish only classes and the other half speaking English. These fourth graders spent this science class in Spanish learning about the innate behaviors of organisms.

WARSAW — Knowing the strong presence of Spanish speaking Latinos in the community, a Dual Language Immersion program was started at Eisenhower Elementary School in 2016. Students begin the program in kindergarten and continue it throughout their education in the Warsaw Community Schools.

In 2018, the program expanded to Leesburg Elementary School.

In each of the Dual Language Immersion programs, students’ days are split — half of the classes are taught in English and the other half are taught in Spanish. Crystal Kreider, DLI instructional coach, explained this is done beginning in kindergarten so students are “fully immersed in the language.” 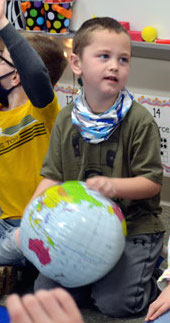 Once students reach fourth grade, the amount of time in each area is changed and the primary language for learning certain subjects, such as math, is switched. A portion of each day remains in content reinforcement to ensure students understand each subject in both Spanish and English.

It is important to start these students in kindergarten so they start learning this way. Kindergartners are taught via a great deal of cues, repetition and pictures. Each incoming kindergarten class at Eisenhower and Leesburg elementary schools have the option to be part of the DLI program. Kreider stated there are typically three different classes for each grade, two DLI classes and one monolingual, traditional class. She believes many parents are seeing the need for more bilingual speakers in the community and thinking “my kid could meet one of those needs.”

The first class to begin the program is currently in the fourth grade, so it will continue to expand to each new grade level as these students continue in their education. By the time these fourth graders graduate from high school, they will have put in similar hours to students who get a minor in Spanish. “The best thing about them learning it so long is some are really starting to sound like a native speaker,” Kreider mentioned.

Personally she enjoys visiting the different grade levels and seeing how the language develops as each year progresses. Recently she has noticed the third- and fourth-grade students becoming more comfortable in the language as they start to joke around with one another in Spanish.

The classes at Eisenhower and Leesburg do vary slightly. Since there are so few native Spanish speakers at Eisenhower Elementary, students are taught through one-way immersion, meaning they learn solely from the teacher. At Leesburg Elementary, there are far more native Spanish speakers. This creates a two-way immersion program with students learning from both the teacher and their peers.

According to this year’s STAMP assessment, which measures proficiency in listening, reading, writing and speaking, all DLI students are on track to meet their proficiency goals by the end of the year. Kreider described the fourth graders as having “knocked it out of the park” in their assessments, with many testing at a sixth grade level.

Participation in the DLI program can offer a wide range of benefits or students. Kreider commented, “It gives them knowledge of the world and opens their minds to ways of thinking they may not have thought of before.”

It can provide greater problem solving skills, a great cultural and world view and open up many more opportunities for students.

Second-grade DLI students at Eisenhower Elementary spent a portion of the English part of their day reading. Pictured are Yamilet Estrada, left, receiving reading help from her teacher Jennifer Goshert. Alyiah Martinez is also working on her reading with the assistance of Goshert.