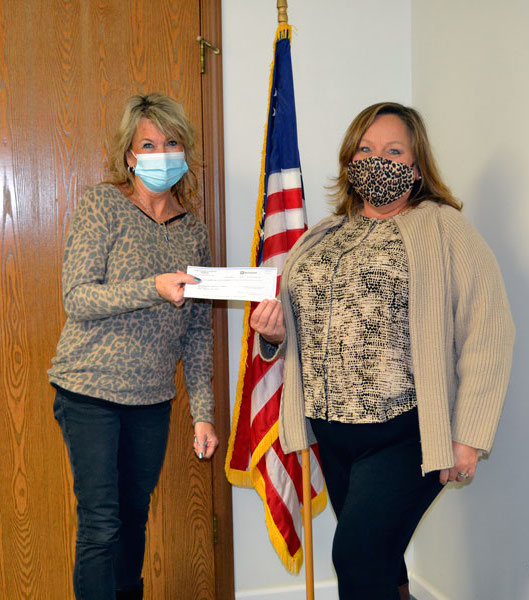 NORTH WEBSTER — This month’s meeting of the North Webster-Tippecanoe Township Chamber of Commerce had a special guest with a surprise for the chamber. Lisa Strombeck, North Webster Town Council president, presented the chamber with a $2,500 check to use toward the Christmas tree lighting event. Strombeck officially presented the check to chamber president Mindy Scaggs.

After the check presentation, Scaggs had a number of updates to present to the board. Three new chamber members were celebrated including Hot Head Burritos, Klam’s Discount Store and Crossroads Bank. The North Webster Hot Head Burritos is only the third location in Indiana. They will be opening in March. The business has discussed the desire for a ribbon cutting.

Emily Shipley, vice president, has also been in discussion with The River Coffeehouse regarding a ribbon cutting. A date has not yet been set.

When it came to Scaggs’ quarterly meeting with the Kosciusko County Chamber of Commerce, she mentioned the bike share program being considered. However, until a trail is created connecting Syracuse and North Webster, participation in the bike share would not be a significant benefit to the town. She also discussed how the Kosciusko County Chamber is making its annual dinner a remote event this year.

This led to discussion of the North Webster Chamber’s annual dinner, which has been moved to Monday, April 19. The board is optimistic the dinner will be able to be held in person. Invitations will likely be sent out in mid-March. Due dates for ticket purchases were also discussed, though nothing was decided.

With the Smithsonian’s “Water/Ways” exhibit coming to North Webster June 26 through Aug. 8, Scaggs mentioned the library will be needing volunteers for subcommittees involving layout and marketing, as well as docents for the exhibit. She encouraged members to reach out and volunteer if possible.

For future meetings, Scaggs mentioned the possibility of holding two meetings again — a board meeting and a public meeting. There is also the possibility of simply setting aside a longer amount of time for the meetings. This is to encourage greater involvement at meetings from chamber members.

Scaggs also mentioned the fire department meeting at 7 p.m. Wednesday. She encouraged people to attend because, as she described, “it’s a good idea to hear what’s going on as a North Webster resident.” Prior to that meeting she and Shipley will be cleaning out the office and invited all board members to help.

In Shipley’s report, she read over the names of businesses who have not paid their annual chamber dues.

Unfortunately, she announced the chamber’s website has been hacked and everything was stolen from the site. This means the entire website will need to be rebuilt. Chamber members discussed the consideration of options regarding hosts, security and management systems. The website is currently under construction with the main goal to simply get it back up and running again.

Jerry Parsons entered into discussion with Bob Pilcher regarding tree trimming for the tree used for the Christmas tree lighting. Pilcher also suggested using outlets on the electrical poles for the tree lighting if the chamber needed more electricity. Parsons will continue looking into electrical options.

Scott Kuhn passed out sample letters he is planning to send to owners of vacant buildings as chairman of the Main Street Committee. The goal is to match these buildings with businesses. He also discussed a possible clean up day in the spring and other next steps in beautification.

Dixie Day plans are tentatively underway. It is currently unknown if or when the Dixie Sternwheeler will run this year.

Winter banner signs are up around town. Both the secretary report and treasurer’s report were accepted.

Next month’s meeting will be held at noon, Monday, March 8, at the Tippecanoe Township Building, 102 S. Morton St., North Webster. 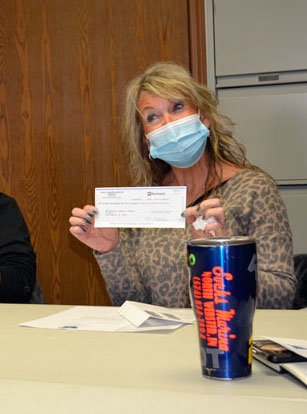 Lisa Strombeck surprised the North Webster chamber board with a check from the town council and congratulated them on the excellent Christmas Tree Lighting event.