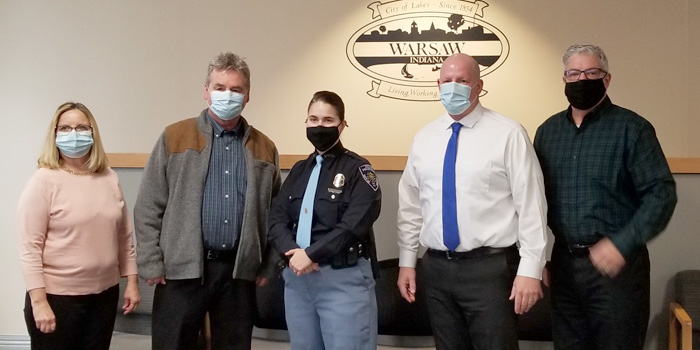 Megan Bortner (center) gathered with family and city officials for a photo after she was read the oath of office Friday, Feb. 5, during a meeting of the Warsaw Board of Works and Safety. From left are her parents, Christine Graykowski and Mike Graykowski; Bortner; Police Chief Scott Whitaker; and Mayor Joe Thallemer. InkFreeNews photo by Dan Spalding.

WARSAW – The city Board of Works and Safety approved contracts for nine shows that are part of the annual Friday night concert series, but plans remain tentative due to the pandemic.

Sheila Wieringa, director of recreation for the city parks department, presented contracts for nine entertainers, some of whom had been scheduled to perform last year but saw their shows canceled because of the health emergency.

Contracts for all nine total $13,500, and a majority are covered with grant money, Wieringa said.

This year’s contracts include an opt-out clause in case of a health emergency, such as the pandemic, that would protect the city financially.

Wieringa cautioned that all concert plans are tentative and dependent upon state guidelines concerning COVID-19.

A vast majority of the shows are paid for with grant money. The entertainers include:

As for the three major concerts of the year – classic rock, country and blues – Wieringa said she’s hopeful they will happen this year and have lined up artists for all three. Dates and other details have not been announced.

In other matters, Mayor Joe Thallemer read the oath of office to the city’s newest full-time police officer, Megan Bortner.

Bortner finished her probation period last year and is now one of 35 officers in the city. The city still has six openings.

Bortner was officially sworn in in December. A formal ceremony was conducted Friday with friends and family in attendance.