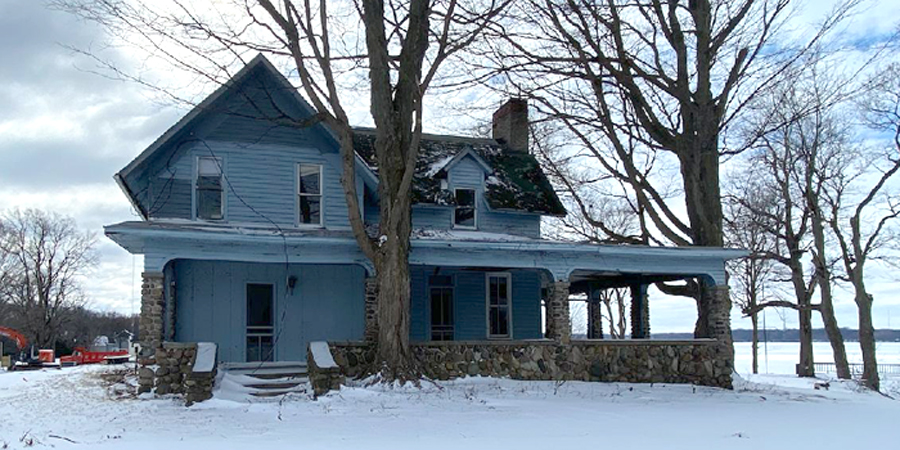 Built by Nathaniel Crow in the 1860s, The Crow’s Nest played many roles in the cultural life of Lake Wawasee. It was an inn during the Depression and housed several yacht clubs before falling into disrepair in the 2000s. Contractor Mike DeWitt purchased the property from the Fick family, descendants of Crow, in September 2020. He plans to salvage the field stones from the porch for reuse in the construction of seven new lakefront houses. Photo provided

SYRACUSE — The Crow’s Nest, a Lake Wawasee landmark for over 150 years, will soon be no more. The property, which sits on 17 acres, including 610 feet of lake frontage, was purchased in September 2020 by developer Fort Myers Investments, owned by Mike Dewitt, who plans to renovate the entire 17 acres with “brand new lake front homes themed after the original homestead to carry on the legacy of the historic site.”

“The house is way beyond repair,” reported DeWitt, who has lived on the lake for 30 years. Nevertheless, he plans to maintain some of the homestead’s history. “We’re planning to salvage anything we can,” he said, particularly the field stone from the large front porch, which will be used in the entrances for the new homes.

Like many other longtime lake residents, DeWitt has heard some of the legends swirling around The Crows Nest, including unsubstantiated rumors of John Dillinger briefly taking up residence there when the homestead served as an inn in the 1930s.

The Crow’s Nest property was formerly owned by the Fick family, relatives of Nathaniel Crow, a farmhand from Ohio who, according to Eli Lilly’s book “Early Wawasee Days,” “arrived at our lakeside in 1853 or 1854 and before long was the proprietor of 400 or 500 fertile acres, 80 of which was acquired for $1.75 per acre!”

The large nine-bedroom house known as “The Crow’s Nest” was built for Crow’s son in 1865; however, the son died before taking possession. Crow preferred the original family home to the south and ignored his wife and daughters’ “vanilla-flavored entreaties” to move into the more spacious house. Undeterred, the pair waited until Crow was in Syracuse on business. He returned to find the old home empty and, wrote Lilly, “his wife, family and chattels all were in ‘The Crow’s Nest.’”

Lilly also described a blacksmith shop situated on a high bank above the lake, which utilized a hydraulic ram powered by a clear, running spring below the house. The ram’s “‘Click! Click! Click!’ was a familiar sound in that quarter for many years.”

“That high bank on Crow’s Bay was one of the most picturesque features of the Lake, topped as it was by huge trees with their gnarled and serpentine roots protruding from the earth …” gushed Lilly, who maintained the nearby Natticrow Beach was named for Crow and was the “broadest, sandiest and best bathing beach on the Lake.”

This shore was also known to the “old hands” as “The Sheep Wash” for its use by farmers in the mid-1800s, who drove their sheep through the woods and into the water to wash before clipping.

The wetlands near the Crow’s Nest property are now known as the Wawawee Area Conservancy Foundation Nathaniel Crow Wetlands.

Over the next century, the The Crow’s Nest would play many roles in the cultural life of Lake Wawasee. Martha Crow Fick, known as “Mattie,” turned the house into an inn during the Depression. Fick later leased the land to an acting troupe, who staged performances in a tent on the grounds and eventually joined the Enchanted Hills Theater.

In fact, following DeWitt’s purchase, Stephanie Fine discovered personal letters and receipt books belonging to Fick in the attic. These are now in possession of WACF.

After World War II, several yacht clubs utilized The Crow’s Nest, which at one time boasted a pier large enough for 28 boats. In 1959, Crow’s Nest Yacht Club was formed, which also turned a large barn on the property into boat storage.

According to DeWitt, the Fick family were “broken-hearted when they sold it.” However, through the preservation of some materials, he hopes to preserve some of the spirit of the past.