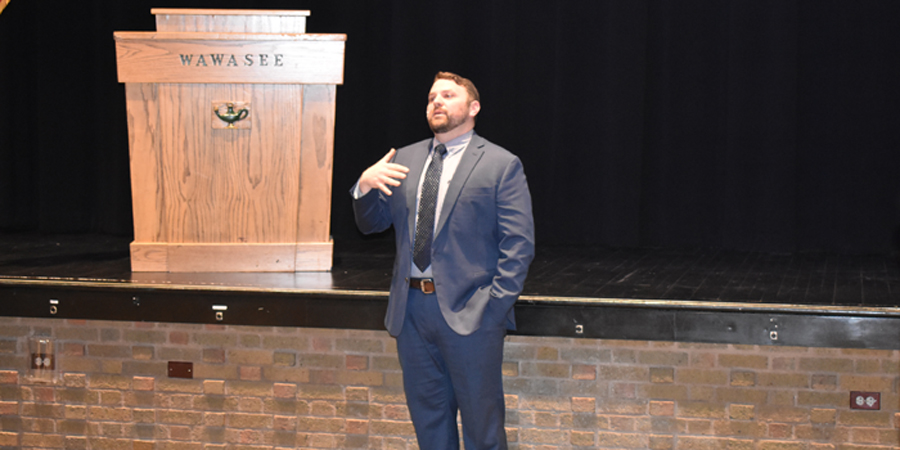 SYRACUSE — Newly appointed Wawasee Community School Corporation Superintendent Dr. Steven Troyer embarked on the “Listen and Learn” phase of his transition with a presentation followed by a question and answer session at Wawasee High School in Syracuse, Monday, Feb. 1.

The interactive event was streamed live on Youtube — where it remains on view — and is the first of four planned for February, all designed to develop relationships with stakeholders in the school corporation and community. According to Troyer, data collected from these events will go into a “state of the school” report he will compile with the school board in spring 2021.

Troyer’s presentation outlined his values, priorities and goals for the future, as well as what he sees as the the corporation’s greatest strengths and biggest challenges.

Troyer’s list of values was topped by his belief “all can grow,” which he credited to psychologist Carol Dweck’s “growth mindset,” suggesting talents and abilities can be developed over time by challenging and engaging children. Troyer extended this growth mindset to include “staff, parents and families also.”

Citing the fact WCSC is the “second biggest employer after Polywood” in the area and includes just under 3000 students and around 400 staff members, Troyer referred to education as “a people business” and stressed the importance of “taking care of people.”

“Communication is key,” stated Troyer, and he pledged to “communicate well and often” with stakeholders in the interests of transparency.

The need for strong communication with the community was a constant refrain throughout the presentation and perhaps an attempt to redress what many saw as a failure of communication leading up to the tax referendum in November 2020, which was voted down.

Jeff Boyer, an alumni and parent, commented that in his 16 years with Wawasee he felt communication had “lacked greatly.”

A “layer of transparency,” said Troyer, is important for taxpayers looking at a publicly-funded school system.

Troyer returned to the idea while discussing goals, one of which was “listen and learn … hearing input from all stakeholders.” To that end he described his efforts to meet not only with staff but also parent groups, businesses, nonprofits and faith-based organizations. “We benefit when we have strong relationships with the community, and the community benefits when they have strong relationships with us.”

Included in this effort was “strengthening board relations.” Troyer explained that by establishing a strong superintendent/school board relationship, “impactful, positive things come to a school corporation.” As though to illustrate his point, the event was attended by board members Don Bokhart and Rob Fisher, whom Troyer introduced.

Citing another contrast with the past, Troyer emphasized the importance of “strong strategic planning,” which, he commented, was “not a big priority for us at Wawasee, certainly not in the last few years.” He hopes to kick off a new strategic plan in the summer of 2021.

Central to Troyer’s presentation was his vision for Wawasee schools: “My vision for Wawasee is to become a premier school corporation in Northern Indiana. This happens by becoming an instructionally focused Professional Learning Community through renewed emphasis on accountability,  growth and improvement.”

“Over the next couple of years you will see that vision come to fruition,” he predicted.

Becoming a “professional learning community,” Troyer said, is a project requiring a shift to a more collaborative working environment, providing more “unity between buildings and among our school corporation itself … Teachers are professionals, and I want to take a more professional approach.”

When later asked by Ben Wilson, parent of a ninth grader, to further explain “professional learning community,” and how it differs from current practice, Troyer said it was a “team approach,” where teachers in different grades and departments would work together to identify learning priorities and respond appropriately to whether or not students are learning effectively. “It brings unity and togetherness to what’s being taught and how it’s being taught.”

Troyer further clarified this was not in contrast to state-mandated testing, but a way to “help us achieve what the state identifies as what is important.”

The biggest challenge facing Wawasee schools is falling attendence, according to Troyer, who cited a study which found enrollment fell from 3,145 in 2015 to 2,824 in 2020. Projections based on area births forecast only 2,500 students by 2026. The effect this will have on funding “has me worried,” Troyer admitted.

Troyer also responded to a parent’s query if the corporation was interviewing families who send their children to outside school corporations to find out why.

According to Troyer 250 students go to outside districts, while 150 come to Wawasee from outside. For some, he said, the reason is practical — work or daycare related — while others are dissatisfied, and a “big priority” is getting started on finding out why. Unfortunately, data on families who chose to go elsewhere without ever setting foot in a Wawasee school is unavailable, he added.

The next “listen and learn” meeting will take place at 6:30 p.m., Feb. 8, in Milford School’s gymnasium.