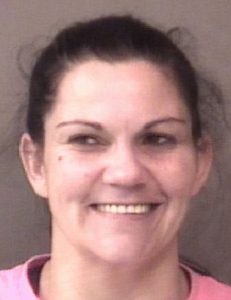 PIERCETON — A Milford woman is facing multiple criminal charges after dealing drugs to an undercover officer and stealing a man’s vehicle.

Klinge is also charged with theft of a motor vehicle, a level 6 felony, in a second case.

Klinge was convicted of dealing meth in 2016 in Fulton County.

On Jan. 21, a Pierceton Police officer spoke with a man regarding a stolen vehicle. He reported his red 2002 Chevrolet Cavalier as stolen and said Klinge was in possession of an ignition key for the vehicle. The man said he didn’t give Klinge permission to drive the vehicle and that she doesn’t own it.

Court documents state the officer went to Klinge’s place of employment and spoke with Klinge about the vehicle. Klinge told the officer she paid for the vehicle and that she and the man had a verbal agreement about both of them using the vehicle.

Klinge said she did not have a purchase receipt or written agreement regarding the vehicle. The officer conducted a Bureau of Motor Vehicles inquiry and found that Klinge’s operating license was currently suspended.

Klinge has an initial hearing on the auto theft case at 1 p.m. Feb. 26, in Kosciusko Superior Court Two.