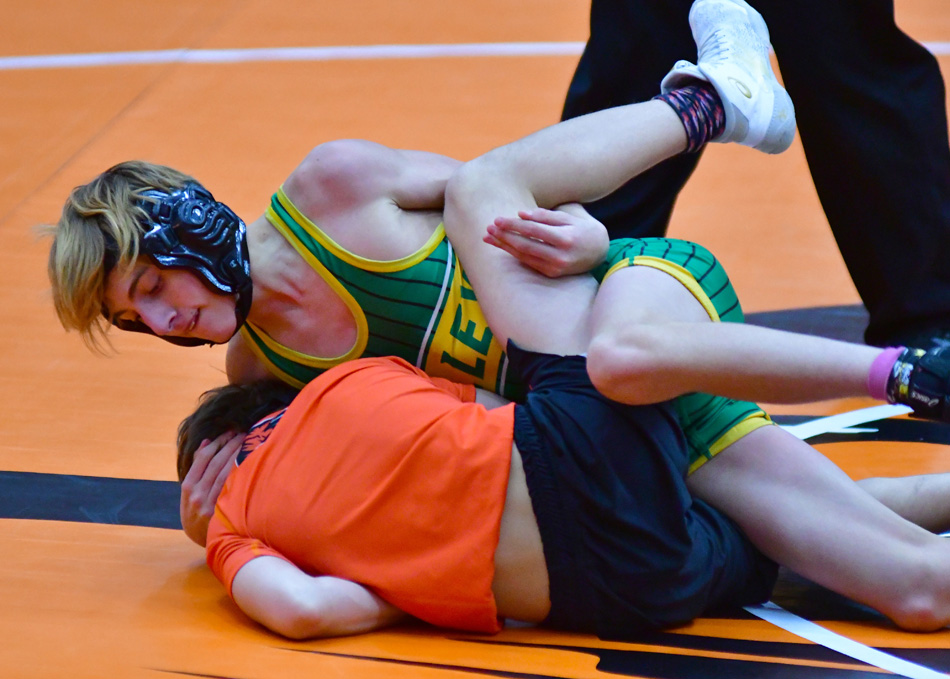 Galvin Shambaugh was runner-up at 106 at the TRC Wrestling Championships. InkFreeNews file photo by Mike Deak

Montelongo cruised through the 120-pound bracket, taking a forfeit in round one as the top seed, then scoring a fall to make the final. In the championship, Montelongo needed just 1:26 to work over Peru’s Cole Sailors for the fall and the blue ribbon.

Hammer started with a pair of pins, entering the championship match at 182 squared up against Rochester’s Adam Deming. The two battled to a 5-5 draw in regulation. In overtime, Hammer took down Deming for two and a 7-5 sudden death decision for the championship.

Galvin Shambaugh nearly started Valley with a title at 106, paired against Jalen May of Peru in the championship. After taking a forfeit and then a decision, Shambaugh worked into the second period against May before succumbing to the top seed at 3:29.

Bazle Owens was third for Valley in the 195 bracket, winning the third-place match 6-2 in a decision over Peru’s Levi Strong.

Rounding out top fours for Valley were Branson McBrier at 145 and Ian Becker at 285, both falling in their third-place matches. The Vikings as a whole would take fifth with 132 points in the team standings.

Rochester would get individual championships at 145 from Greyson Gard, 220 from Brady Beck and 285 from Marshall Fishback to claim the team title with 203 points.

Logan Farnell of Maconaquah at 160 and Logan Cox of Northfield at 195 were also TRC champions.

All champions for the TRC Championships are deemed automatic All-TRC.