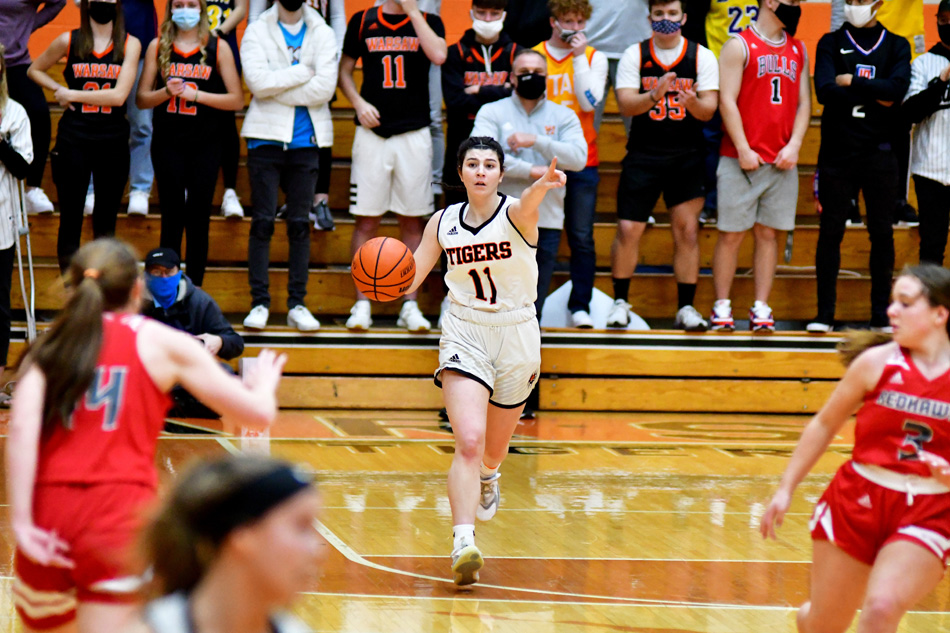 Bailie Stephens and Warsaw will get another crack at Goshen in the Goshen Sectional, the two paired to play on Feb. 2. InkFreeNews file photo by Mike Deak

INDIANAPOLIS – Well, we made it.

Girls basketball sectional draws were issued Sunday evening by the IHSAA, signifying another milestone in high school athletics in Indiana. The 46th running of the state tournament will begin around the state in a week, and, as usual, high interest surrounded the draw as to how and when each 0-0 team will begin its postseason.

Here’s a quick look at the sectionals of interest to the IFN coverage area.

Hail to the victors. The defending sectional champion Penn Kingsmen (17-3) avoided all three of the big dogs from the Northern Lakes Conference. Penn drew Concord (6-13) in game one on Tuesday, and with a win would face Elkhart (8-12) in the semis. Penn is looking for its 10th sectional title in the past 11 years, winners of the past three in its respective tournaments.

The other half of the bracket should be a war.

Goshen (17-3) is having perhaps its finest season in program history, one game away from winning the NLC outright for the first time ever. It won’t be party time in the sectional, however, as Warsaw (15-5) will be sitting there on Tuesday night in the second game of the evening. Goshen defeated Warsaw handily a week ago in their NLC showdown. And no rest for the weary, as whichever team comes out of Tuesday will have perennial matchup nightmare Northridge (15-7) sitting there rested and ready in the second semi-final on Friday.

The cream of the Northeast Corner Conference, at least of those in the Wawasee Sectional, are all paired together, because why not? Central Noble (15-4) is quietly having a very solid season after most figured the hangover years after the state championship would have the Cougars back in Class 2-A. The Cougars are paired with Lakeland (17-6) for Tuesday’s first game, the two splitting their two games this season. The West Noble Chargers (15-5) are sitting there on Friday in the first semi-final.

The lower half of the six-team group has the hosts from Wawasee (6-10) squared up with old pals NorthWood (1-13) on Tuesday in game two. The road for the defending Class 3-A champs has been brutal this season, with three stoppages for COVID and the consequent court struggles that followed. The winner of the NLC rematch, won by the Warriors in early January, will take on a very dangerous Tippecanoe Valley squad (12-7) in Friday’s second semi-final. Sidney Wagner is among the top 50 scorers in the state (18.8 ppg through Saturday) and has a young supporting cast ready to prove themselves.

The opening game of the sectional will dictate a lot of the remainder of the six-team grid. Oregon-Davis (10-9) starts the week off at home, but has a Triton (8-11) side waiting. The two played just a week ago at the Bi-County Tournament, Triton coming out with a win for the first time against the Bobcats in six years. The winner will get a struggling LaCrosse team (3-15) that lost 11 of its first 12 games to start the season. Triton is trying to end a nine-year sectional title drought.

Culver (5-10) and West Central (4-16) meet in Tuesday’s second game, the two Hoosier North Athletic Conference foes still needing to play this week to wrap up the regular season. A historically stingy Argos team (8-10) will enjoy the bye and meet the winner, looking to win its first sectional since 2017.

It’s been a tough season for Lakeland Christian off the court, and the Cougars will be happy to pick up a bye at the five-team Northfield tournament.

The Tuesday contest pits bitter rivals Northfield (14-5) and Southwood (7-9). Northfield is the heavy favorite on paper, winners of nine straight and 11 of its last 12. The Norse are one win away from locking up the Three Rivers Conference title. The two teams will meet later this week to wrap up the regular season.

Southern Wells (4-15) and North Miami (3-15) play in the first semi-final Friday, with Lakeland Christian (5-4) to take on the Northfield-Southwood winner in game two Friday night. LCA played its first game after 16 days off on Saturday, beating Clinton Christian at home. LCA has won its past three games dating back to its home tournament in late December.

For a complete list of sectional brackets and information, visit IHSAA.org.