BOURBON – John Glenn defeated Triton 62-46 at the Trojan Trench in the semifinals of the 56th Annual Bi-County Tournament. 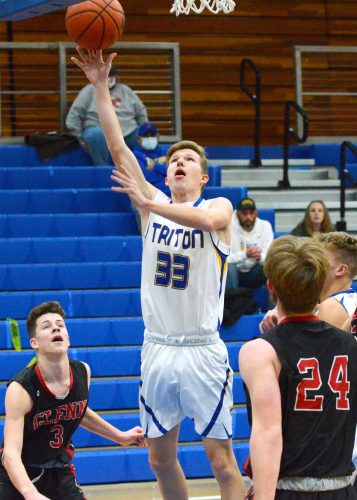 Triton’s Connor Large goes up for his only basket of the night during Friday’s Bi-County semifinal against John Glenn. InkFreeNews photo by Nick Goralczyk

That’s what the final score will read for years to come, for those that want to look it up, 62-46. But 22-10 is the final tally that really tells the story. That was the edge in rebounding that the Falcons earned over Triton. Glenn was tougher and more efficient in the two team’s second meeting this month. Triton was dropped by the Falcons 51-50 on January 8 in a game that it wish it had back, but Friday night’s contest left the Trojans licking their wounds.

“Their physicality got to us tonight,” admitted Triton head coach Jason Groves of his alma mater. “We have to get better, and that’s what I told our kids after the game. We have to get more physical in practice each and every day. I feel like we don’t see that type of physicality game-in and game-out and, I told the kids, we just aren’t where we need to be physically.”

A game that had a sectional type atmosphere to it despite the COVID-limited crowd, started off electric. The first quarter saw six lead changes between the two squads. But as the first eight minutes drew to a close, Glenn was just getting heated up. The Falcons closed the first quarter on an 8-2 run and led 18-14 going into the second.

Holding a 23-20 lead following a three by Triton’s Tyson Yates, Glenn found itself with the ball looking to expand its lead late in the second quarter. The Falcons could not buy a basket for much of the possession but managed to pull down eight offensive boards. Regardless of Triton’s efforts, Glenn kept coming up with the rebound to get another chance at a basket. Joe Delinski ended the barrage of misses by finally draining a three to give Glenn a 26-20 edge.

The next two possessions yielded zero points for Triton while Glenn enjoyed, respectively, a three from Jake Frankiewicz and an inside two from Brycen Hannah. At 31-20 the momentum had fully shifted to Glenn. The Falcons led 33-22 at the half.

Hannah proved to be the tone-setter for Glenn. He led all players with 24 points and six rebounds. He was an enforcer on defense and a force to be reckoned with on offense. Even when the 6’4” sophomore was sent to the line he still came through, going 6-7 from the charity stripe.

Glenn was 14-15 from the line, enjoying several trips late in the game. The Trojans were a perfect on free throws, but had limited chances from the line, going 6-6 on the night. Struggling to get in the paint and find clean shots was a struggle all night for the Trojans.

“Defensively I thought we were pretty good on (Ashton) Oviedo and Yates, obviously they are two really good players,” explained Glenn head coach Travis Hannah. “I thought we took Ashton away. The shots that he made tonight were contested, he really had to work to get them. Yates is such a tough player to guard, we fouled him a few times, but even the shots he got were difficult shots. (Cole) McKinney got a few big shots on us, but you can’t guard every shot. But defensively I thought we did well on their big two or three scorers.”

Glenn’s defense remained tough in the second half as the Falcons never let Triton get closer than 10 points after the break. Glenn (11-1) moves on to Saturday’s championship game against New Prairie, a rematch of last year’s Bi-County Championship. The Falcons will be going a for its third-straight Bi-County title.

“Bi-County is a big deal for us because of the difficult sectional that we’re in,” Hannah stated. “Bi-County for us, and for me particularly, it’s a special deal. It’s the way, in my opinion, that basketball should be played. Small school communities. You get that community backing. You don’t see that a lot in (the Northern Indiana Conference). Even though its only going to be parents in the stands, it’s still going to be a great atmosphere and a chance to win a championship.”

Yates led Triton with 13 points while McKinney was 4-9 from deep and finished with 12 points. No other Trojan scored in double digits. Triton’s offensive struggles certainly were not lost on Groves.

“Glenn exposed our weaknesses tonight,” Groves said. “The true test of character is how we respond to adversity. We haven’t had a whole lot of adversity this year, we have to fight through this. (Glenn) thumped us tonight and all of our weaknesses were exposed and we have to learn from it. We have to become better. Better defensively. Better offensively. (Glenn) was just better on both sides of the ball tonight.”

It was announced following the Triton-Glenn boys contest that the girls championship, which featured Triton and Argos, is canceled. The announcement was made public by LaVille Friday night, citing COVID issues with a close contact in the Triton program. The championship, which was to have been played at LaVille Saturday at noon, will not happen. It was not made clear how long Triton might be sidelined, which could include a scheduled game Wednesday between the two at Argos, as well as the regular season finale between Triton and NorthWood, which would pit NorthWood head coach Mark Heeter against the program he led to a pair of state championships in 2000 and 2001.