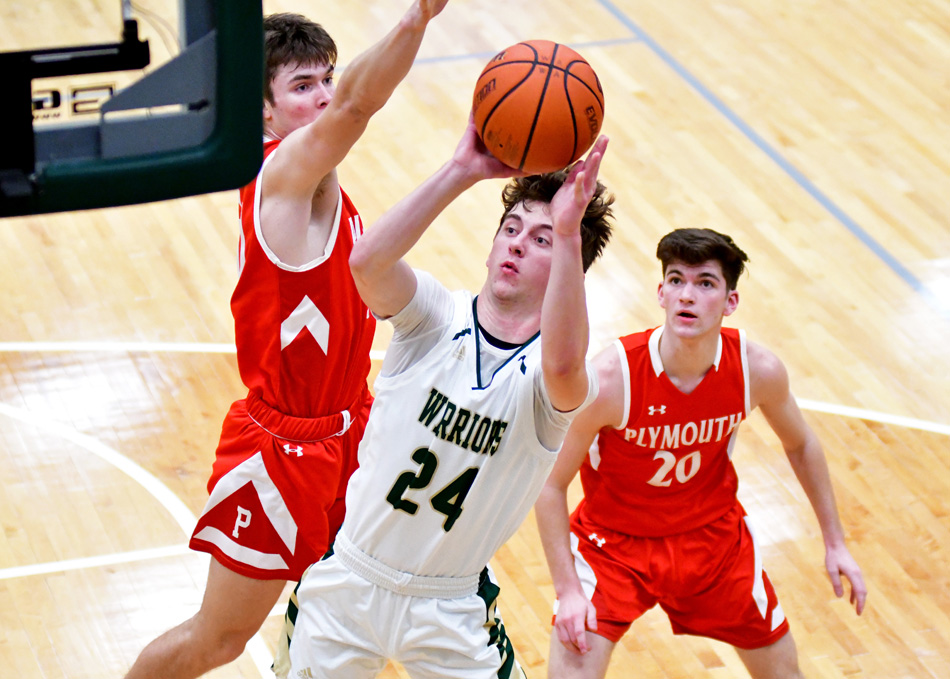 A pair of head’s up plays from Ethan Carey in the final minute helped Wawasee knock out Plymouth Friday night at the Hardwood Teepee.

After Wawasee forced a steal with 40 seconds left, Carey sliced through the Plymouth defense and dished to Grant Brooks for two, putting Wawasee up six. Carey then recorded a steal as Wawasee iced the game with free throws the rest of the way.

“It’s very difficult to explain, seeing Plymouth’s record and say, ah, you beat a two win team. But that is a quality team that has played a hard schedule,”  said Wawasee head coach Jon Everingham speaking with The Mix. “We weren’t ahead the whole game, but we came back.

“Ethan just kept us close,” continued Everingham. “When it was time to pressure us late in the game, I thought we did well attacking their pressure. After we hit a couple shots, they thought twice about pressing us. That made a huge difference.”

In a wild one at The Pit, NorthWood had to do double duty to hold off the RedHawks.

After starting the game on a 14-3 run, NorthWood saw Goshen fire back and force overtime, the game tied at 48. Both teams played to a 4-4 first overtime, where NorthWood would come alive in the sixth period, outscoring Goshen 14-8 to finish the win.

Jamarr Jackson and Cade Brenner both finished with 16 points to lead the Panthers (9-3, 3-1 NLC), Jackson adding 11 rebounds and Brenner five assists. Ian Raasch had 13 points and seven rebounds and Cooper Wiens added 12 points and a pair of steals.

In a shocking result coming out of the Tiger Den, the top team in the NLC fell Friday night.

Warsaw fell from the perch after an offensive outage, scoring just seven points in each of the first, third and fourth quarters. Concord’s 27 points in the second and third quarters made the difference.

Kyle Dawson netted 22 points and 10 rebounds to lead the Tiger JV to a 54-36 win over Concord. Jaylen Bolen had 10 points for the MInutemen.

Connor Rich hit a pair of free throws with 22 second remaining to lift Southwood to the win at Rita Price Simpson Court in greater Akron.

Full stats from the game were not immediately provided.

In the JV contest, Valley remained unbeaten with a 39-34 win over the Knights. Dom Welk led the Vikings with 10 points and Landon Walters had nine points.