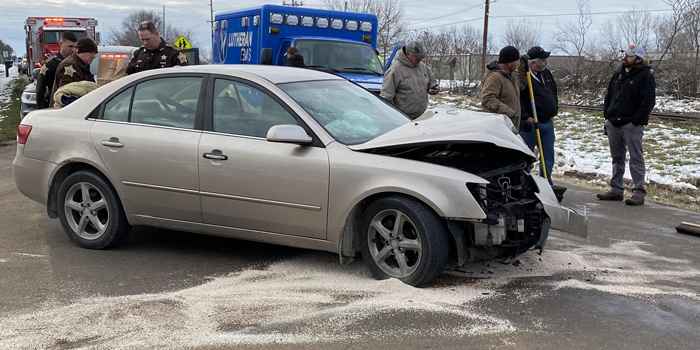 This 2007 Hyundai Sonata driven by Dustin Jansma, 30, Warsaw, was one of two vehicles involved in a wreck at 10 a.m. Thursday, Jan. 7, in Leesburg. InkFreeNews photo by Leah Sander.

LEESBURG — Due to incorrect information originally provided to InkFreeNews, the driver of one of two vehicles involved in a Thursday Leesburg crash was misidentified in an earlier article.

It was Dustin Jansma, 30, Warsaw, who was driving a 2007 Hyundai Sonata in the wreck along Old SR 15 and Yvonna Street, Leesburg. He was also the one taken to a hospital after complaining of leg pain.

Summer Robertson of Warsaw, who was originally listed as the driver, is the registered owner of the Sonata.

He started to turn left into the path of Jansma, who was traveling northbound on Old SR 15. Their vehicles collided.

Cramer was also taken to a hospital after complaining of abdominal pain.