WARSAW — A Syracuse man is facing multiple charges after he led police on a chase that ended in North Webster. 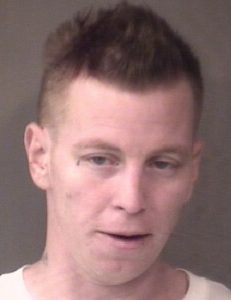 According to a probable cause affidavit, on Dec. 26, a Kosciusko County Sheriff’s deputy went to a residence to investigate a report of intimidation with a gun. Two men there said Carpenter threatened them, saying they were taking a camper from him that was at the property.

They said while they were having a verbal argumet, Carpenter said to the men “they were hit and they would have people coming after them.” The two men also said Carpenter pulled out what appeared to be a handgun from a holster and pointed it at them.

They said Carpenter then got into his vehicle, a silver 2009 Chevrolet HHR, accelerated in reverse and shouted that “you are hit.” He then headed south on North CR 1000E.

The sheriff’s deputy found the vehicle while it was headed westbound on East Old US 30 near the SR 13 intersection. The deputy found out the vehicle’s plates were false and/or fictitious and tried to initiate a traffic stop.

The vehicle went into a driveway and backed out, headed east on East Old US 30. The sheriff’s deputy along with other Kosciusko County police officers and officers from the Winona Lake and North Webster Police Departments chased the vehicle for more than six miles. The suspect vehicle drove up to about 80 mph during the chase while erratically passing other vehicles, traveling in the wrong lane and not stopping at stop signs in North Webster.

The vehicle stopped in North Webster and Carpenter tried to escape on foot. Officers stopped him as he was trying to get into his ex-girlfriend’s house. She told officers they hadn’t been together for more than a year and he shouldn’t be inside her house.

Officers found that Carpenter had a marijuana cigarette inside what was a normal cigarette pack on him. Inside the vehicle, they also found three BB guns, hypodermic needles and syringes and a white/off-white substance in a wrapper.

The reporting sheriff’s deputy went to the first home where the two men were. They said they were afraid Carpenter would hurt them if he came back to the residence and they didn’t want to take responsibility for what was in the camper. They said they could see a silver spoon and illegal drugs inside.

An officer spoke with Carpenter at the Kosciusko County Jail. Carpenter said he lives in the camper and the items in it belong to him. An officer searched the camper and found meth, spoons with burn marks, and a smoking pipe and scale, both with residue.