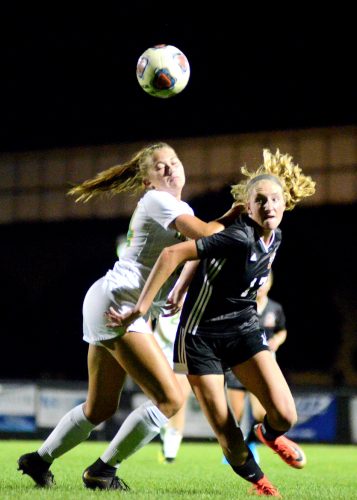 Warsaw’s Audrey Grimm has signed with Taylor Univeristy, where she hopes to continue to dominate the soccer pitch. InkFreeNews file photo

The senior forward for the Lady Tigers pieced together one of the best offensive seasons in program history, registering 18 goals and nine assists, both figures leading the team. Attached to her four years in the program, Grimm graduates with 45 career goals after tallying 35 in the past two years. Grimm leaves Warsaw as one of the top five scorers in program history, and in her career had nine game-winning goals.

2020 was a season to remember for Grimm, who had four goals in a win against Goshen, back-to-back hat tricks in wins over Mishawaka and Concord, and playing the decoy, had three assists in Warsaw’s 4-2 win over Northridge that clinched the team’s first unblemished run through the Northern Lakes Conference in nearly two decades.

“Audrey Grimm is one of the most athletic players in the area,” said Warsaw head coach Jon Hoover. “Whenever we needed a goal this year, Audrey would put the team on her shoulders and get it done. She’s one of those players that never seemed to have an off day. I’m thrilled to see her continue her career at Taylor. She is a great fit for coach (Scott) Stan’s program in Upland and should find success there early.”

Grimm is currently starting for the Warsaw girls basketball team and competes in track in the spring.

“The Christian community and environment in non-replicable,” noted Grimm of choosing Taylor. “The education is very well respected. I loved the soccer program, and it’s full of fun traditions.”