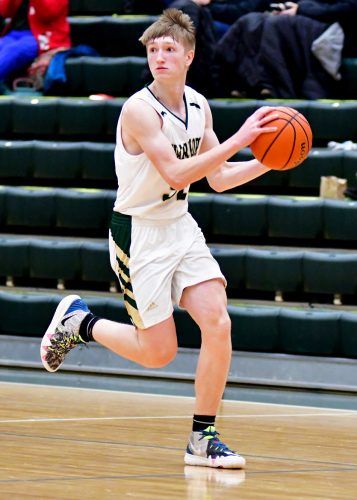 Triton was white hot from the start Tuesday night against visiting Winamac. The Trojans scored 27 in the first quarter and 24 more in the second quarter, building a 24-point halftime lead.

Tyson Yates had a night to remember, scoring 22 points and adding six rebounds, five assists and two steals. Ashton Oviedo had 16 points and Bruce Johnson came through with 15 points, seven rebounds and four steals. Triton (5-1, 2-0 HNAC) has won five in a row after an opening loss to NorthWood to start the month.

Russell Compton led the Warriors with a double-double of 10 points and 13 rebounds. Beau Brandt added 12 points and eight rebounds.

A 14-0 fourth quarter allowed Triton to pull away in a 38-20 JV win over Winamac. Triton finished the game on a 21-3 run. Evan Briles led the Trojans with 13 points and 12 boards, and Chandler Westafer added 13 points and three steals.

Wawasee (2-2) had its varsity core back intact but struggled from the field, shooting 9-37 from the floor, and missed all eight of its three-point attempts. Jack Stover led the Warriors with eight points.

The Warrior JV had three in double figures, led by Collin Roberson’s 18 points, in a 56-21 triumph over the Eagles. Jay Finlinson had 15 points and Mason Possell added 10 points.

Wawasee evened its record at 3-3 on the season and picked up its first Northern Lakes Conference win of the season.

Kennedy White had her best game to date, recording 17 points, four steals and four rebounds. Danielle Jenkins had 10 points and four steals, and the duo of Emily Haines and Lindsay Doss each had six points and two rebounds.

A 20-point third quarter had the Warriors go from one down at the half to up 10 going into the final quarter.

A long road trip for Warsaw Tuesday didn’t end in a happy drive home as the Lady Tigers fell to the Lady Knights in Ossian.

The Class 3-A No. 2 Knights held off a hard-charging Warsaw side in the fourth quarter as the Tigers poured in 21 points to make it interesting.

Bailie Stephens, Audrey Grimm and Kensie Ryman all tallied 10 points for Warsaw (9-3) and Abby Sanner had eight points and 11 rebounds.