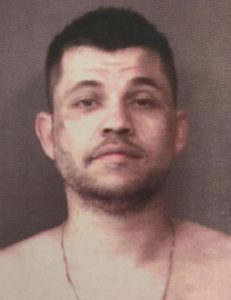 WARSAW — A Warsaw man was sentenced to eight years in prison on three criminal cases.

Miller was sentenced in Kosciusko Circuit Court on Monday, Dec. 21.

On July 2, 2018, a Warsaw Police officer saw Miller driving in the area of Anchorage Road and Sunset Drive in Warsaw. The officer was aware there was a current warrant for Miller’s arrest in Kosciusko County.

According to court documents, Miller reportedly spotted and attempted to elude the officer. The officer found Miller’s parked vehicle and apprehended him. While searching the area where Miller was found, officers found a plastic container; inside the container were four plastic bags, each containing 1/2 gram of methamphetamine. Officers also found a cellophane wrapper containing 14 grams of methamphetamine, as well as a loaded 9 mm semi-automatic handgun and seven AR 15 clips.

The officer identified the vehicle’s driver as Miller.

On July 31, 2019, a Warsaw Police officer saw Miller driving in the area of Pierceton Road. The officer was aware of active arrest warrants for Miller, leading him to pull Miller’s vehicle over. Officers later discovered the vehicle Miller was driving had been reported stolen in Fort Wayne.

In the first case, for dealing in methamphetamine, Kosciusko Circuit Court Judge Michael Reed sentenced Miller to six years in the Indiana Department of Corrections; Miller was also sentenced to three years in DoC for carrying a handgun without a license with a prior conviction. Both counts will be served concurrently, or at the same time.

Reed sentenced Miller to one year at DoC for each additional criminal case he was sentenced on. All three cases’ sentences will be served consecutively. In total, Miller was sentenced to eight years in DoC. He has 730 days of jail time credit that will go toward the sentence. Miller’s driver’s license will also be suspended for two years following his release form incarceration.