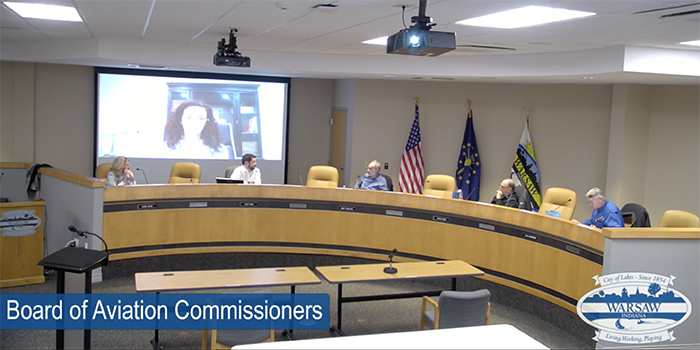 Board Member John Yingling, seated third, led the meeting as Board President Jay Rigdon was absent.

WARSAW — During the Warsaw Board of Aviation Commissioners meeting held tonight, Dec. 22, Airport Manager Nick King announced that the 2020 fuel sales were down by around 50% from last year.

“My guess is that we are going to end the year fairly close to 50% of our fuel sales from last year, maybe a little better than 50%, but that’s going to depend on how busy this month has been,” said King during the manager’s report.

Despite that, the airport has seen a slight uptick in fuel usage for the period from Thanksgiving through the New Year. King believes this is likely due to COVID-19 restrictions in neighboring states.

“We’re getting a lot more general aviation traffic than we traditionally do. Some surrounding states with slightly more restrictive — not able to go to restaurants and things like that — have caused general pilots to fly into Indiana (which) has fewer restrictions,” said King. “It was either Thursday or Friday, we had three aircraft from Michigan flew down just to go out to dinner here because they could meet in a restaurant versus up in Michigan where they can’t. So we are seeing some increased traffic in ways that we have never seen before.”

Mary Kerstein, CHA project manager, stated the final inspection of the runway project occurred on Nov. 20. According to Kerstein, the edge light tags still need to be installed and the full-application of the paint will occur in the spring.

Last month, the board approved change order #2 for this project, but there was a mathematical error. A revised change order was presented to the board members, which was unanimously approved.

The board also approved a contractor payment for Phend and Brown, Milford, in the amount of $326,929.84.

For the power line project, CHA has been working with FFA on the grant application. The FFA has made some comments, and a revised application was submitted last week. The hope is that the application can be finalized soon.

King also presented a contract with DTB, the airport’s provider of routine maintenance services for the Instrument landing System and the Automated Weather Observing System. The FFA requires airports to have this type of contract.

Board Member John Yingling led the meeting as Board President Jay Rigdon was absent. The next meeting will be held on at 5:15 p.m. on Tuesday, Jan. 12, 2021.