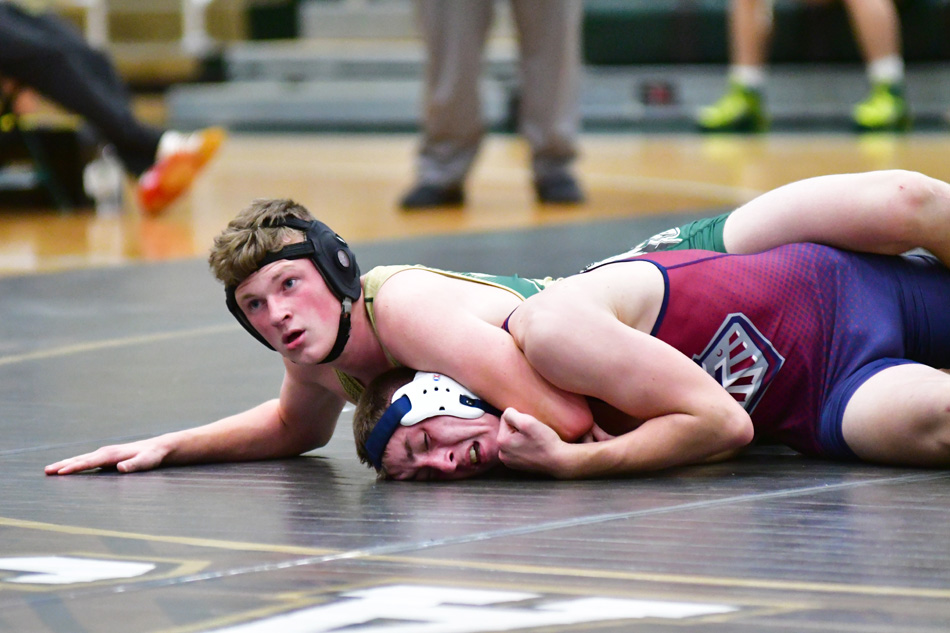 SYRACUSE – Wawasee hasn’t shied away from taking on top programs. Saturday was no different as it welcomed in Class 2-A No. 2 Garrett for a showdown. The Railroaders, however, showed more attrition in a 46-24 dual win over the No. 8-ranked Warriors.

Wawasee welcomed in seven wrestlers to their season debuts, one in a line of Wawasee programs rocked by quarantine protocols. With the new-but-old faces came tired legs and lungs in several matches that went three periods, an area Garrett often exploited.

Garrett won three of the five matches that went all six minutes, and two of them in the final seconds. Kamren Pelmear scored six points in the final period to overcome Cameron Zimmerman, 13-12, and Brayden Baker also had a huge third period rally, recording four takedowns to get past Brendan Dilley, 12-11. Chase Leech opened the afternoon with a 10-2 major on Landen Dilley.

“Mat sense is the key, and maybe we need to work on that a little more,” said Wawasee assistant coach Jamie Salazar, filling in for head Frank Bumgardner who was unable to attend the meet. “I was also out for a month with surgery, so I am just getting back in here, too, so I’m getting my eyes on things and there were a lot of things I noticed we got exposed on today. Biggest thing right now is just to get everyone healthy and match ready.”

The Railroaders also had five pins, achieved by Chandler Minich and Doug Merriman in the first period, Colten Weimer and Jayden Gilbert in the second round, and Seth Van Wagner in the third round.

Garrett also claimed a forfeit to wrap up its team scoring for the day.

“Flat out, we just got outwrestled today,” Salazar said. “There are a lot of things to cover and work hard at getting back to the mentality we need to be at. Obviously, aggression wins and they came here and showed that. We were focused on getting the boys back in the routine, but we didn’t want to see them come out and perform like this.”

Wyatt Slusher got Wawasee on the board with a 3-2 decision over Jack O’Conner at 182. Slusher worked O’Conner into a near fall after a scoreless first two periods, getting three for the work. O’Conner would get a reversal but couldn’t get Slusher to bite any further.

Wyatt’s older brother, Haegan, was in total control of the heavyweight battle with Gage Camp, scoring a pair of takedowns before getting the slap at 2:37.

Hunter Miller took a 4-0 lead on Keegan McComb to see the lead shrink to one, but scored an escape and a takedown to hold on for a 7-3 win at 120.

Dylan Tom followed Miller’s win with a pin at three minutes over Kane McCormick, and Jace Alexander closed out the day’s activities with a quick 50-second pin of 145-pounder Wayne Wells.

“We did some good things, I want to make sure that’s said. We had some good matches by a few of our guys,” Salazar said. “One thing here at Wawasee we are building legacies and building that program. So we want to take on programs like Garrett who is No. 2 in the state, or No. 1 Bellmont next week. That gives us a gauge on exactly where we are at. It lets these kids know if they aren’t ready to go what a butt whoopin’ feels like. It’s definitely important for them to know they can’t live off their name. When you build a legacy you write your own chapter. That’s one thing they can realize from today.”