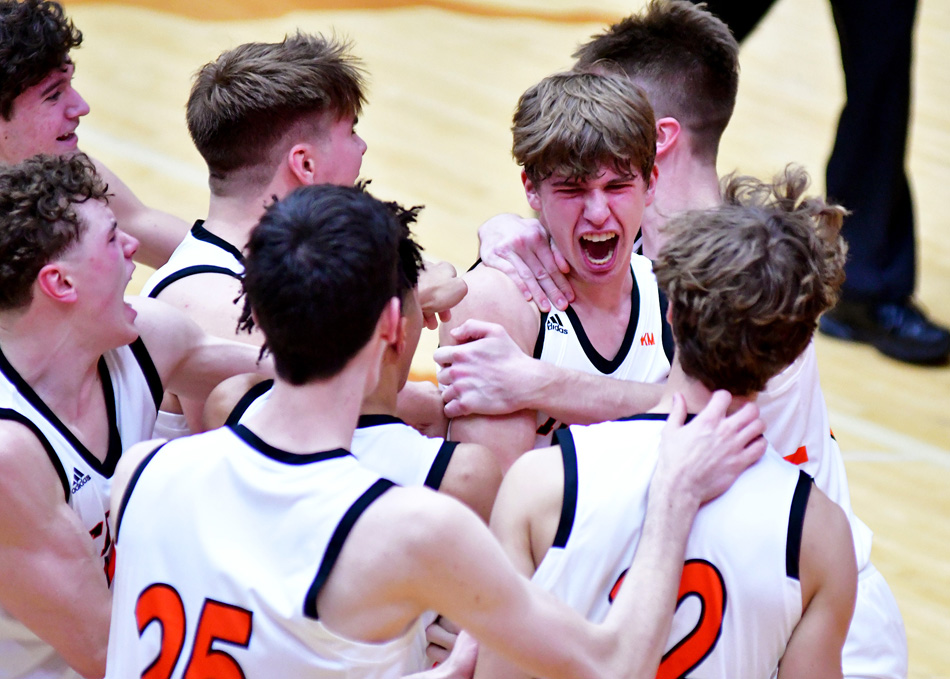 Jaxon Gould, at right facing, hit a game-winning shot at the buzzer to lift Warsaw to a 50-49 overtime win over Lake Central Friday night. InkFreeNews photos by Mike Deak

Jaxon Gould hit the biggest shot of his career, taking an inbounds pass with 2.6 seconds to go and rolling in a shot at the buzzer to give Warsaw a 50-49 overtime win over visiting Lake Central Friday evening.

With 16.7 seconds left, Warsaw came out of a timeout and took a shot that bounced around in the corner of the court. Lake Central touched the ball on its way out of bounds, giving Warsaw one last shot. Luke Adamiec took the ball and hit a curling Gould, who worked up the baseline and tossed up a shot over two Lake Central defenders. The ball bounced around and down as the horn went off, setting off the biggest celebration on the TCU Court since volleyball season.

“That’s the worst possible place you could take the ball out,” said Warsaw head coach Matt Moore. “You load the side, there’s no high-low look. All they have to do is keep it in front. And Jaxon is squirrely enough that he gets around. And, again, it’s a 6-10 guy and he gets a shot off.”

Adamiec’s heroics in regulation got the game to overtime, hitting a shot in the lane in the waning seconds to tie the game at 44. 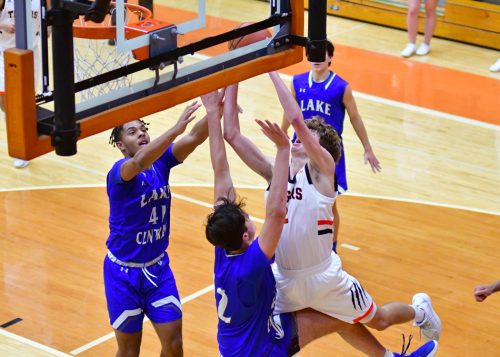 Lake Central had trailed for the entire first half, but took a 29-27 lead late in the third when Ethan Knopf hit a jumper. The guard was solid for the Indians with 18 points, six rebounds and three assists.

Ben Bergen, however, put the Tigers back up 32-29 with a corner three to close the third. The Indians would grab the lead back and push it to six at 40-34 with a bucket from Knopf, and again by five, 42-37, when Nate Oakley put in a basket.

Bishop Walters came off the bench to drill a huge three, and Gould tied the game at 42 with a hoop and the harm.

Knopf temporarily put Lake Central ahead at 44-42 with a leaner, setting up the Adamiec hoop at the end of regulation.

The Warsaw JV looked to run away in its contest, but Lake Central refused to die in a 59-44 Tiger tally. Warsaw led 31-11 at the half, but a late charge from Lake Central in the fourth quarter made the score closer than it appeared.

Drew Heckaman had 18 points and Kyle Dawson had 16 points to lead the Tigers to its third win on the season. Karson Colin posted 15 points for the visitors.