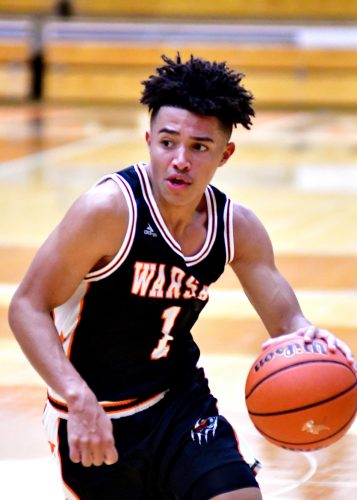 Warsaw powered through a strong second half to put away the visiting Eagles Saturday night.

Trailing by four at the half, 29-25, Warsaw held City to just five points in the third quarter and rode out the fourth to move to 2-0 on the campaign.

Judah Simfukwe and Ben Bergen both scored 12 points to lead the Tigers, and Luke Adamiec was a bucket behind with 10 points. Russ Winchester had three offensive and seven total rebounds in the winning cause.

For the second night in a row, Wawasee took down a Northeast Corner Conference power.

The Warriors hit Steuben County and saw Keaton Dukes rack up 24 points, five rebounds and three assists. Grant Brooks had 11 points and Kam Salazar added nine points and four assists. The Warriors were 10-14 from the line in the fourth quarter.

The host Hornets had Brian Parrish lead the team with 12 points and four assists.

Wawasee’s JV came away with a 51-41 win to move to 2-0 on the year. A 14-3 fourth quarter run pushed the Warriors past the Hornets. Collin Roberson and Mark Wiggs combined for 29 points and 15 rebounds in the win.

The Panthers finally opened its season Saturday and held off the Cadets in The Pit Saturday afternoon.

Ian Raasch paced the Panthers with 16 points and eight rebounds, and Cooper Wiens had 13 points and five boards.

The Cadets had three in double figures on the scoreboard, led by Ajani Washington’s 13 points, followed by Joe Tapp’s 12 points and Samuel Aumick’s 10 points.

The No. 8-ranked Fishers squad kept Warsaw at arm’s distance in a Saturday matinee in greater Indianapolis.

Abby Sanner led the Tigers (4-2) with 14 points, with Bailie Stephens next at nine, Kensie Ryman at eight and Kendall Wayne at seven.

Wawasee evened its mark at 1-1 overall with a resounding win at Westview.

Kennedy White led the way for the Warriors with 10 points and five rebounds while Becca Smith had 11 rebounds to compliment her six points. Danielle Jenkins and Jada Carter each had seven points, Jenkins adding three assists and Carter five rebounds.