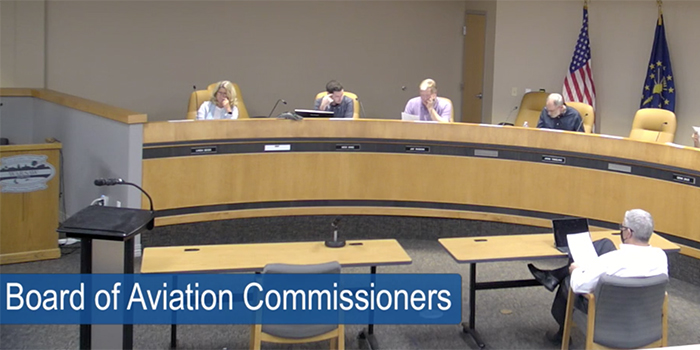 WARSAW — During the Warsaw Board of Aviation Commissioners meeting held tonight, Nov. 10, the board declared a special emergency in order to address some pavement cracks.

Airport Manager Nick King explained that there are 35 cracks on the east/west taxiway Alpha which are causing a pavement failure. The original plan was to crack-seal these cracks, but some of them have widened to 3 inches and have turned into full-depth cracks.

“We’re going to have to go in and do a full-depth repair on those cracks,” said King. “The cracks were small enough that we couldn’t crack-seal last fall … It’s unbelievable how fast they’ve opened up. We need to get them fixed now rather than later.”

Phend and Brown submitted to different quotes, a base and an alternate. The base quote of $72,555 included an INDOT mix to repair the cracks with the alternate quote of $76,930 included an FFA mix.

King suggested that since the variable was so small, the board accept the FFA mix quote since it is meant to handle aircraft instead of vehicles. He also assured the board that there was enough money in the budget to afford the emergency repair.

The board unanimously accepted Phend and Brown’s alternate quote of $76,930.

Mary Kerstein, project manager for CHA, was present virtually to discuss both the runway rehabilitation and the power line projects.

The runway rehabilitation project is nearing completion, with paving markings and electrical modifications remaining. The final inspection has been scheduled for Nov. 20.

Kerstein presented a $4,157.15 change order to the board regarding cement stabilization with Phend and Brown. The board approved this change order.

She also explained that she is anticipating having to do a grant amendment, due to the project total exceeding the allotted grant amount. No figures were provided because the final construction costs aren’t ready. If a grant amendment is needed, the airport would be responsible for 10% of the amendment amount.

Also related to the runway rehabilitation project, the board approved a pay request for Phend and Brown’s construction work and a CHA invoice for project bidding, administration and inspection duties.

Regarding the power line project, the FFA has asked that the airport put together the grant applications. The grant total is $7,598,415. The idea was to get the grant submitted this year so that the airport locks in the price and does not have to adjust figures.

The board approved submitting the grant.

During the manager’s report, King noted that the airport will be receiving $69,000 of CARES Act money, which will be put into the general fund. This money will be used for payroll purposes, to help offset the loss of fuel sales.

The board also approved a hanger lease with Zimmer Biomet. This lease is very similar to the normal leases but needed a couple of changes since the hanger is airport-owned. The lease is for $5,000 a month through December 2025, when Zimmer-Biomet will be given the option to renew the lease.

Also approved was a modification request for Hanger 24. This hanger was sold last month and the new owners want to install a septic system to accommodate a bathroom. The tenant will be responsible for all associated costs and maintenance.

The next Warsaw Board of Aviation Commissioners meeting will be held at 5:25 p.m. on Tuesday, Dec. 8.