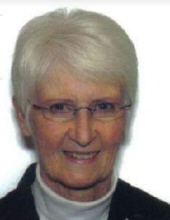 Carol L. Hoffer, 84, Etna Green, passed away Wednesday, Nov. 4, 2020, at Memorial Hospital of South Bend. Her death was a direct result of being struck by a pickup truck as she crossed the street in downtown Etna Green.

Carol was born Dec. 25, 1935, at Logansport, the daughter of Leo and Mary Bell Hyndman. She has been a lifelong resident of Etna Green, a graduate of Etna Green High School in 1953 and was a member of the Etna Green United Methodist Church. Carol also belonged to Jr. ONO Club, and KEGS ( Keep Etna Green Shining). In her earlier years she worked at the trailer factory in Etna Green as well as managing the Express Mini Mart for over 20 years.

Carol enjoyed helping others, and did so most often in secret. She voluntarily did landscaping around town and at the parks, and helped clean up Epworth Forest Camp in the springtime. Her last day on earth was spent blowing leaves at the park so it would look pretty for Election Day. Despite this strong work ethic, her door was always open for family and friends to visit.

On June 21, 1953, she married the love of her life Thomas L. Hoffer in a ceremony in Etna Green who preceded her in death April 18, 2013. She will be remembered by her children, Debra (Carl) Feldman of Etna Green, Jody (Steve) Nifong of Warsaw, Rick Hoffer of Bourbon and Todd (Tena) Hoffer of Etna Green. Also surviving are eleven Grandchildren, many great-grandchildren and great great-grandchildren, her brother Charles (Barb) Hyndman of North Carolina, sister-in-laws: Jerri Monesmith of Etna Green, Sandy Cain of Glassglo, KY; brother-in-law: Ron (Dana) Hoffer of New Haven. She was preceded in death by her parents, her husband, brothers: Carl and Neil Hyndman and brothers-in-law Sam and Andy Hoffer.

Friends and family may gather on Sunday from 1-3 p.m. at Deaton-Clemens Funeral Home (115 S. Main Street Bourbon, IN 46504). Funeral services will follow at 3 p.m. in the funeral home with Pastor Kenneth Cooke officiating. Burial will follow at Etna Green cemetery.

The family asks that any memorial contributions be made in her memory to: Etna Green United Methodist Church (131 W Broadway St., Etna Green, IN 46524).