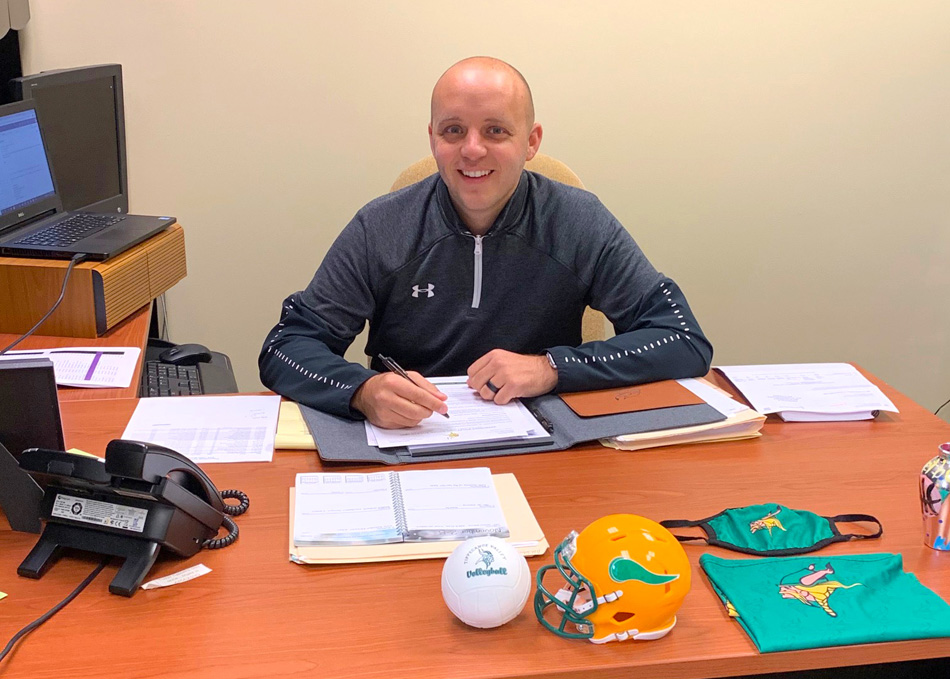 AKRON – Coaches tend to go with the flow when opportunities arise. Aaron Butcher, a longtime basketball coach, found it was too hard to pass up a chance to head back home.

Butcher, who was starting the build for year three as the men’s basketball coach at Northern Oklahoma-Enid University, was going over all the pitfalls and challenges 2020 has thrown at the basketball world, and sports world in general. But when the athletic director position at Tippecanoe Valley came open, Butcher started to stack pros and cons on the scales.

“I think this year is extremely different for everyone,” Butcher said. “I was with my team for a few weeks down in Oklahoma before accepting this job, and that was like nothing I had ever dealt with. I think everyone, from coaches to administrators to the everyday person is dealing with things we have never dealt with. It is all about staying positive, being a problem solver and finding ways to help those around us be successful.”

Butcher was set to replace Gina Hierlmier, who split from the Valley job to take the same athletic director position at Caston High School. But Hierlmier vacated the Valley office in August, a couple weeks after golf had opened its season, and days before soccer, tennis and football were to get underway. And in the middle of an ongoing pandemic where uncertainties from sports to virtual schooling to buses and everything in between were all on the table.

Butcher didn’t immediately take over in August, partly because he was still transitioning out of Oklahoma, and partly because Valley hadn’t formally hired him. Not officially accepted into the position by the Tippecanoe Valley School Board until Sept. 21, Butcher was slowly folded in with the help of the likes of former Valley athletic director Duane Burkhart, athletic assistant Emily Gearhart and even Valley principal Brandon Kresca. It was a tough situation and Valley was going to make it work.

A longtime resident of Wabash, the move back to the Hoosier state wasn’t a tough transition. Aaron and his wife, Alison, and their 11-year-old daughter, Kalli, would settle back into the area. While not a ‘Valley Guy’, Butcher was well aware of the school and a lot of the traditions. He’s filling in the blanks as he goes.

“I have been 100 percent impressed with everyone in the Tippecanoe Valley School System,” Butcher said. “From the school board, to Blaine Conley, our superintendent, to the building principals and teachers, and to all of the individuals and families I have been able to meet so far it is the same thought each time. Great people that have great pride in the green and gold.”

“People that truly have a servant mindset and want to help their students any way they can. I was somewhat familiar with the Valley tradition from growing up in Wabash.”

Butcher’s coaching experience runs deep, having coached basketball at several high schools before joining the men’s basketball staff at Indiana Wesleyan, where the team played in a pair of NAIA Elite Eights. Butcher also helped revamp a struggling Ancilla College men’s basketball program, one that eventually played its way to a No. 1 national ranking. He coached the past two years at Enid, and was into a third this fall before accepting the Valley athletics gig, his first formal athletic director job.

“​Anytime you take a new job there is a learning curve,” Butcher said. “Trying to learn those things once the school year has already started and sports are going it does make it a little trickier. Gina, the previous AD, left the program in a really good spot so that really helped with the transition. I also go back to the quality of people here. The people here have really helped to make it a smooth transition.”