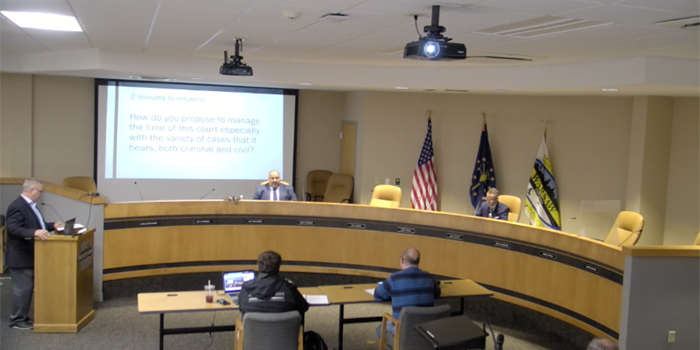 Republican Chad Miner and Democrat Antony “Tony” Garza were asked a variety of questions by a four-person panel consisting of three journalists and an attorney.

Garza is a Warsaw Community High School graduate who studied law at the Indiana University School of Law. His experiences include working for a legal services office, the prosecutor’s office and a Warsaw law firm before establishing his own practice. Garza has also worked as a mediator.

Miner graduated from Whitko High School and earned a law degree from Indiana University. He has served as the county’s attorney since 2014 and worked in criminal and civil cases, as well as estate planning and business planning. Miner has also served as Judge Pro Tempore in Superior 3.

The current Superior 3 Judge, Joe Sutton, has served on the bench since 1997 and is retiring at the end of this year.

Garza and Miner were both asked how they would use audio-visual technology in Superior Court 3 if elected. Both candidates noted how technology could help out-of-county attorneys take care of routine matters such as pre-trial conferences, as well as aid jail staff by not having to bring inmates into courtrooms as often.

“Those technologies are particularly helpful at this point in time and I also think that helps with safety in a variety of different perspectives,” said Miner. “The other thing is you have attorneys that deal with cases in Superior 3 that don’t necessarily work around here. That also helps keep costs down.”

Candidates were also asked what they would change about the court’s operations if elected to the bench. Both mentioned the importance of talking with the county prosecutor, local attorneys and court staff to determine what issues could potentially be addressed.

In regard to criminal proceedings, Garza said he would move those matters into a block-scheduling method in order to allow more time for civil cases to be addressed.

Part of the debate also focused on cost-effectiveness within the court and how each candidate would efficiently handle resolving civil cases while balancing mediation costs.

“Efficiency and access are both important things,” said Miner. “Mediation itself is not typically overly costly, but you could potentially end up with a situation where, in comparison of the overall cost in the case, the mediation cost may become prohibitive.”

“It’s a court that on both the criminal and civil side has a lot of meaning to it,” said Miner when asked why he decided to run for the position. “On the civil side, something that I find to be very meaningful is the fact that it does serve as the small claims court for the county. As a result, it’s an opportunity for folks to come in and get cases resolved in a way that is less costly than what it would be if it were a full-blown litigation matter.”

“In seeing the criminal side of things, I think it’s very important that the judge have courtroom experience and know-how to deal with both sides of the case, as well as how to respond and prepare for those cases,” said Garza on running for judge. “Between the civil landlord tenant cases, as well as the criminal defense and prosecution, I think there’s a lot that can be done with this court.”