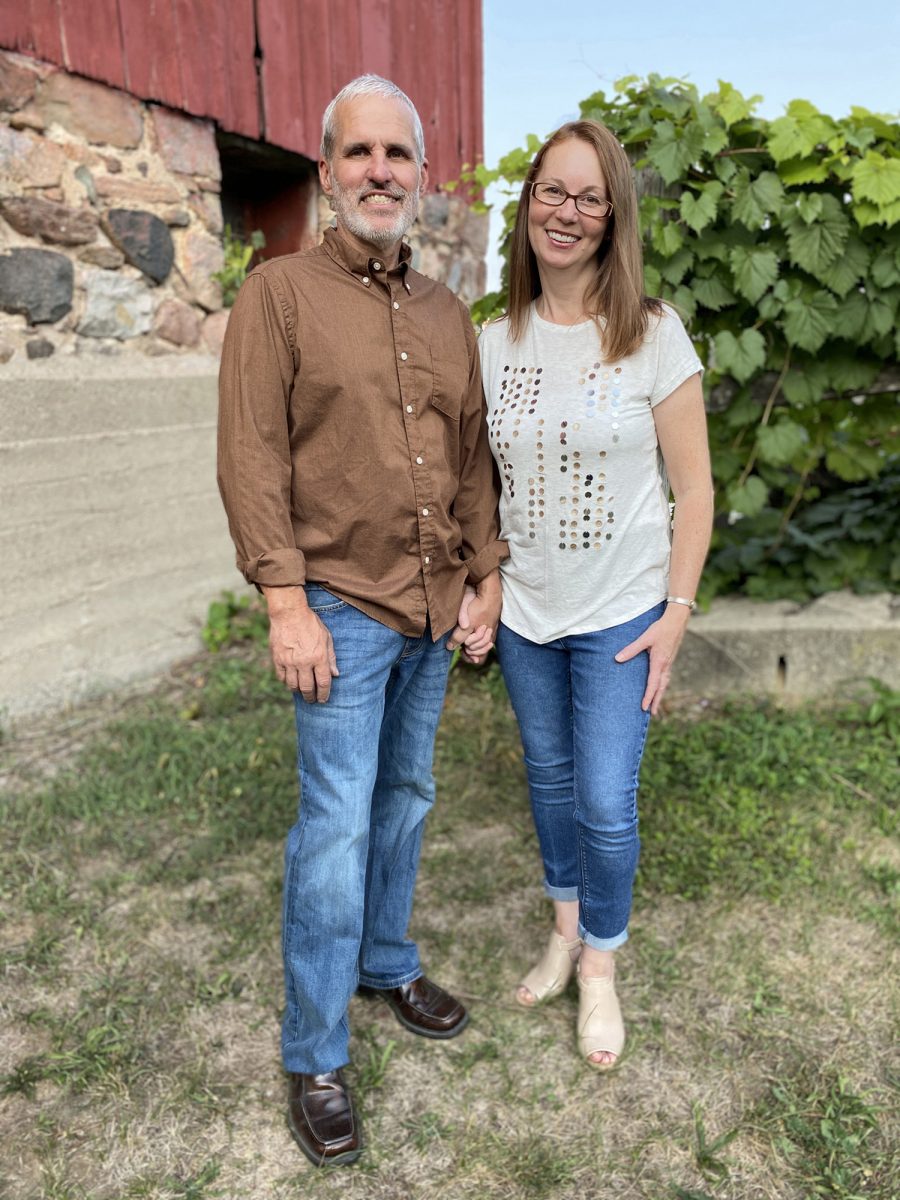 Jon and Amanda Scroggs stand in front of the old red barn they are restoring on their property in Kosciusko County. Photo provided.

Originally from England and still speaking with a pleasant English accent, she met her husband-to-be, Jon Scroggs, while he was traveling on a missions trip in Ashford, Kent, England, in 1985. Jon, from Fort Wayne, had just graduated from seminary.

“We were pen pals for a couple of years,” Scroggs said, before the two married in 1987. They lived in England until 1990 when they moved to the United States during a time when England was in an economic recession.

For roughly two years, the Scroggs lived in Fort Wayne. Then Jon, who is a self-employed carpenter, had a contract to renovate an old wood shop on Levi Lee Road near Warsaw into a church. Scroggs said they fell in love with this area and decided to move here, which they did in 1992 and now live in Plain Township just east of Warsaw.

After settling in the area, the Scroggs’ children began attending Leesburg Elementary School. “I became involved in the PTO and really enjoyed being in the classroom,” Scroggs said.

She worked for several nonprofit organizations and then was hired to work in the Step One alternative education program for Warsaw Community Schools. She helped juniors and seniors at Warsaw Community High School find internships.

Scroggs was granted her citizenship in 2000 and went back to college to get a master’s degree in education. She then taught English language arts to grades seven through 12 while still working with the Step One program. She spent six years teaching in the classroom.

Later she obtained an administrators license and was the assistant principal for the class of 2014 of WCHS. Her career then took a bit of a turn.

“I decided I missed the classroom,” and Scroggs returned to teaching, this time as a media specialist at Lakeview Middle School in Warsaw for five years.

Since moving into the role as director of communications, she noted a big project has been to renew and revise the individual school websites for Warsaw Community Schools. “We have new features and can communicate better with parents,” she said. “We have better messaging capabilities.”

COVID-19 has made administrators and staff realize even more how dependent they are to get information out to families such as COVID guidelines, meal information, available technology and the return to school plan, just to name a few.

Her role involves connecting schools with families through the website and social media. Emails, text messaging and school messenger are also used. It is nearly all digital communication and using regular mail “has become old news,” she said.

Jon has been busy since the pandemic began installing several walk-in showers. He is also renovating a barn at their home that is more than 100 years old and was originally owned by Sarah Pound, who once had a 326-acre farm and was featured in a 1909 Indianapolis Star article.

The Scroggs also own a bed and breakfast site through airbnb.com and have a cottage at Waubee Lake they take their grandchildren to during the summer months. “We also love to travel,” Scroggs said.

They have three children: Amy Msouty, 32, and married to Sammy; Chloe Pickens, 30, and married to Evan; and son Jordan Scroggs, 28, a secondary English language arts teacher who had been teaching in Thailand but is now teaching remotely for a school in China and is awaiting his visa to return to Asia.

“I’m incredibly grateful to live in Warsaw, Indiana,” Scroggs said. “I’ve met the most amazing people and have wonderful friendships. I’m so thankful that we found this town and have been so warmly welcomed here.”