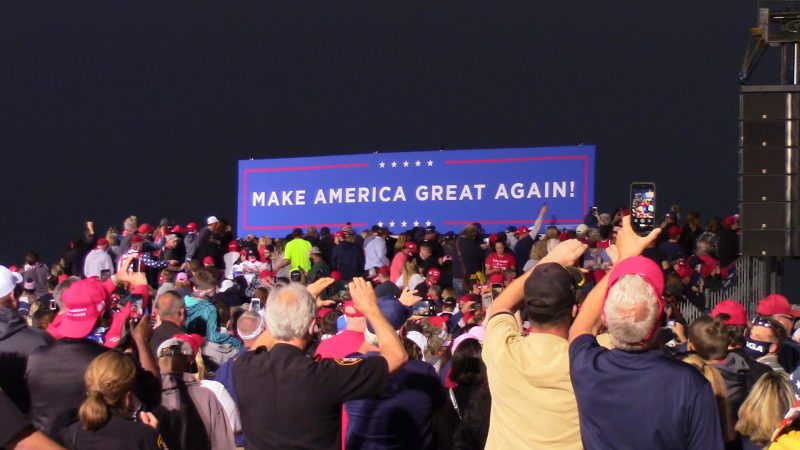 A photo from a recent Trump rally in Ohio. Photo provided 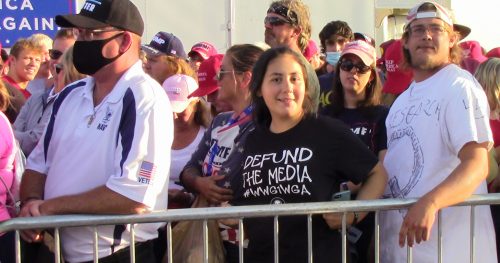 Two people supporting QAnon are pictured at a Trump rally in Ohio. The hashtag depicted in the black shirt is short for a QAnon rallying cry, “where we go one, we go all.” Photo provided.

One photo certainly caught my eye.

A young college student had sent our company a short story about a recent Trump rally in Ohio and included a handful of photos, including one featuring two young people at the rally who were promoting QAnon on their shirts.

Her story, written for a journalism class, highlighted the enthusiasm at the rally but did not mention QAnon, which made me curious. So I reached out to her.

I’m not identifying her by name because she’s young and uninformed on this issue and I don’t want to bring shame upon her or her family or her college. But I will tell you she’s from north-central Indiana, attends a private college in the Midwest and is very articulate for an 18-year-old.

She said she learned about QAnon after her family began researching the group.

To recap, from what I’ve read through mainstream reporting, supporters of QAnon believe President Donald Trump is battling a cabal of “deep state” saboteurs who worship Satan and traffic children for sex. Earlier this year, Trump gave a boost to the baseless theory when he told reporters he appreciated the support and noted they are “people that love our country.”

I asked her about the photo of the two students and whether she understood the messaging. Yes, she said, in a nonchalant manner, and went on to say she has embraced the phenomenon.

“I try to go with what the actual evidence is,” she said. “There’s pretty strong evidence that the president has confirmed the things they are saying and his identity as Q+,” she told me recently in a phone call.

She said she’s aware of the criticisms of the group, but told me, that “QAnon has been detracted from by people propagating false information while claiming either to be Q or to be associated with QAnon.”

On Friday, the US House of Representatives voted overwhelmingly to condemn the baseless QAnon conspiracy movement, which has been identified as a potential domestic terrorist threat by the FBI, according to a report by the Washington Post.

The vote was 371 to 18 for the resolution sponsored by Reps. Tom Malinowski (D-N.J.) and Denver Riggleman (R-Va.) and came days after Malinowski said he received death threats from QAnon supporters after a false GOP ad accused him of lobbying “to protect sexual predators,” the report said.

I imagine the young college student will not be pleased if she reads this column. I hope she does more research and eventually concludes the group is nonsense. And I hope she looks back years from now and sees this as a learning moment.

PINK SLIME – Speaking of propaganda, have you heard of Pink Slime? It’s the term used to describe an explosion of websites that pretend to be news outlets. As one friend pointed out, they have innocuous names such as the South Bend Times, Hoosier State Today and the Kalamazoo Times. You can learn more about them here.

HOAXES – US Rep. Jim Banks rightfully dinged presidential candidate Joe Biden for accusing President Trump of saying the coronavirus is a hoax. Trump was actually railing against Democrats for their denunciations of his administration’s coronavirus response, according to the Associated Press.

But let’s face it. Throwing around the term hoax has become commonplace for Trump and his supporters who then carry the message in their own way. That was apparent when an acquaintance (who I consider keenly intelligent) suggested on Facebook that the liberal response to  the pandemic was “the biggest mass hysteria hoax in world history.”

I tend to think the use of the term hoax in this context has probably contributed to where we are today as the virus continues to flourish in some states.

To be included in this list in the future, please email me a few days ahead of time.

TRUMP’S ILLNESS – Count me among the many who are hoping President Trump and the First Lady recover quickly from COVID-19. I also hope he takes a more serious approach to the use of masks in the future. Mocking his opponent last week for the use of a mask looks pretty silly right now.

PENCE VERSUS HARRIS – The second in a series of debates for president is scheduled for Wednesday, Oct. 7, between the vice-presidential nominees, incumbent Mike Pence and Democrat Kamala Harris. There is a 100 percent chance it will be more professional and more engaging than what we saw last week in the first presidential debate.

ELECTION COUNTDOWN – Election Day is 30 days away. The deadline to register to vote is Monday. You can do that online here. Early voting begins in Kosciusko County on Tuesday at the Kosciusko County Justice Building in Warsaw.