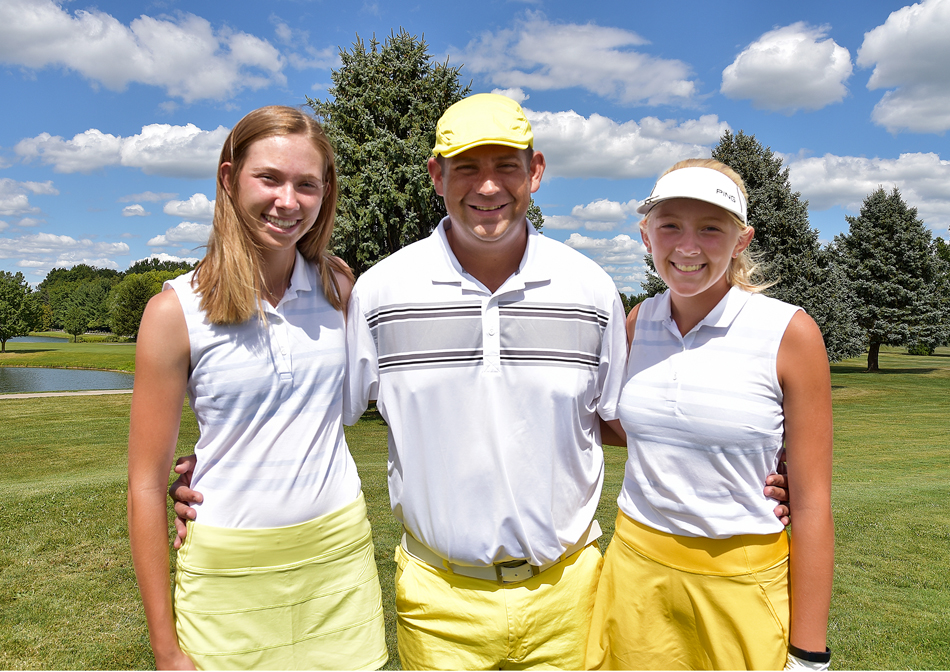 CARMEL – Most teams get to the second day of the IHSAA Girls Golf State Finals looking to move up the leaderboard. Well, all except for the Evansville North Huskies. For the fifth time in seven years, coach Ken Wempe’s squad took home the title with a two-day total of 625.

Lapel sophomore sensation Macy Beeson took home the individual title with a two-day total of two over par 146. The lefty capped off a sensational tournament run after winning the Noblesville sectional with a 69 and the Lapel regional with a 73 over the past two weeks.

For NorthWood, ‘moving day’ proved to be a good day, despite cold and windy conditions. The Panthers shaved a stroke off their day one score of 372 to finish with a 743. Coach Adam Yoder’s squad held off a pesky Greenfield-Central, who was 14th heading into Saturday, squad in the end and passed Northern Lakes Conference rival Concord to finish 12th overall as well.

The Minutemen ended up dropping from 12th to 14th on a day two that saw them fire a 386 compared to Friday’s score of 363. They were led by Brooke Watson’s two-day total of 171, which landed her in a tie for 43rd.

NorthWood’s Cybil Stillson (161, T-17th) and Breanna Goss (87, T-46th) capped off tremendous junior campaigns by being named to the Indiana High School Golf Coaches Association All-State team. This is the first time in the Panthers’ program history that two players have been named to the 20-player squad.

The IHSGCA names the top ten finishers from the state finals and then adds ten more players based on a season-long points formula.

On his all-state duo, Yoder said, “Both Cybil and Breanna had great years, and I know this weekend will motivate them even more to improve. We’re very fortunate to have them in our program. I am so excited for them to have earned all-state honors. They both work very hard at their craft.”

Stillson, Evansville North’s Faith Johnson, and Homestead’s Madison Dabagia are the only players in the loaded 2022 class in Indiana to earn three All-State team berths. Less than 15 players in state history have made the team four times according to IHSGCA president Josh Bryant.

Northwood’s lone senior, Abbie Richner, finished with a two-day total of 203 in her first state finals.

Before the Panthers gathered to do their traditional pictures for the ‘state sign’ that will hang in their practice facility at McCormick Creek and watch the final groups come in on the 18th hole, Richner spoke to her teammates, their families, and a group of no less than seven program alumnae that came to the state finals.

“I just wanted to thank you all for making this such a great experience for me. Its because of all of you that I continued to grind it out, and if not for everyone here, I never would have made it four years. I love you all.”

Yoder, on his departing senior, said, “Abbie is one of the best teammates I’ve been around in 22 years of coaching. She just gets it, when it comes to a golf team. She’s been an awesome senior for us, I am so happy to have her end her career here at Prairie View, and I think her comments to our program family says it all about what and who were are as a program.

“I’d also like to thank the staff here at Prairie View, the IHSAA, IGA, and IHSGCA for what they do here at the girls golf state finals. IHSAA Assistant Commissioner Chris Kaufman and all involved have really spearheaded an amazing decade of growing the girls’ game at HS level and we’re very fortunate to have been a part of this year’s state finals.”

Sophomore Riley Kitson ended her third straight trip to the state finals (golf and basketball in 2019-20) with a 207.

Junior Bella Sechrist was scheduled to make her debut in the state finals, but an eye injury that cropped up on Friday night, forced sophomore Kira Schrock back into action on short notice on Saturday. Understandably, Schrock struggled under the circumstances and finished at 269.