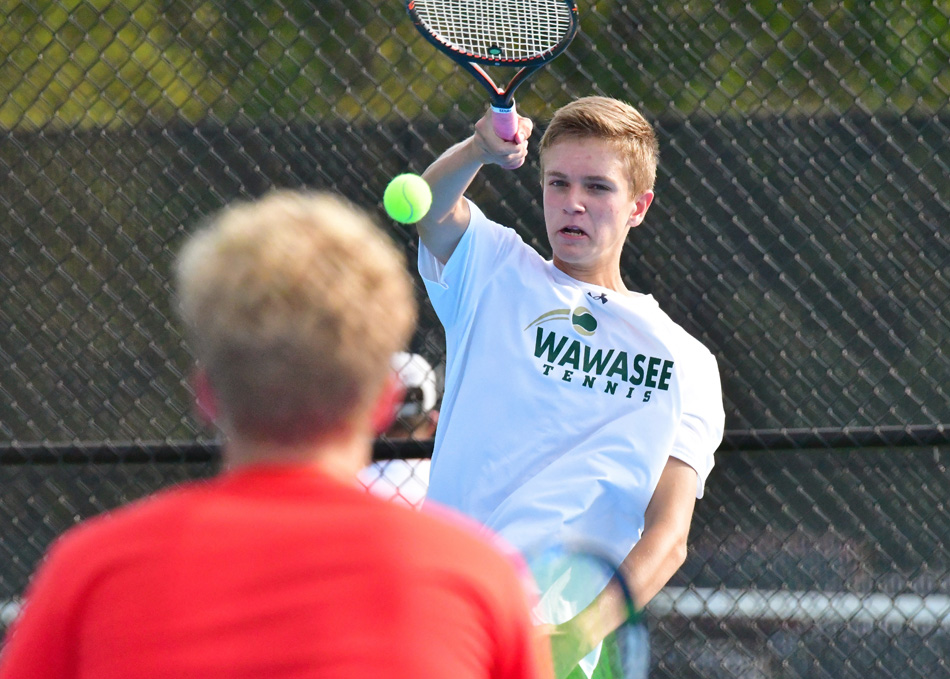 DUNLAP – The stage is set for Saturday’s Northern Lakes Conference Boys Tennis Championships. The semi-final rounds were all conducted Thursday afternoon at Concord.

NorthWood’s Ben Vincent, the No. 1 overall seed in the singles tournament, is alive for a title shot. The Panther senior, a two-time NLC champion at No. 2 singles, defeated Northridge’s Brendan LaCounte 6-4, 6-4 to advance to Saturday’s final at Goshen Middle School. Opposite Vincent will be Concord’s Bryson Schrock, a straight set winner over Goshen’s Pi Wellington.

NorthWood’s other two semi-finalists came up short in three-set thrillers. At No. 2 singles, Brady Chupp fell to Northridge’s Grant Martin 7-6 (4), 3-6, 6-4, and at No. 1 doubles, Concord’s Gavin Smith and Cayden Rohrer also won its first set, 6-0, but saw Gage Gongwer and Tretyon Martin come back with a 6-3 second set. In the third, the two teams went to extras before the Minutemen duo came out with a 7-5 win.

Martin will take on Carlos Lichty of Goshen in the championship, and the Concord doubles team will see Northridge’s Aaron Cripe and Evan Nay, which took out Wawasee’s lone semi-finalists in Grant Brooks and Blaine Baut, 6-2, 6-0, in the other semi-final.

Warsaw’s only Wednesday winners, Michael Ray and Cole Rhodes at No. 2 doubles, saw their championship aspirations cut short in a 6-4, 7-6 (4) loss to Northridge’s Cameron Henry and Collin Seegart. Ridge will face Concord’s Thomas Burkert and Brayden Newburn in the two dubs final.

At No. 3 singles, Goshen’s Moses Sawatzky and Plymouth’s Carter Snyder advanced to the championship.

Concord, the round robin champion at 7-0, are looking to fend off Northridge (6-1) for the tournament title and outright championship.

Final rounds begin with 7/8 place matches on through the championships, action beginning at 9 a.m. at Goshen Middle School.