We turn to Edward Hopper, an Ashcan artist, whose childhood home in Nyack, N.Y., is now on the National Register of Historic Places. His parents of Dutch heritage were financially secure in the area on the Hudson River north of New York, which was a hub of yacht building.

Hopper was raised in a conservative, deeply religious home populated by many women from the family plus a maid. He and his father were a small island of males in their home. Hopper’s parents encouraged his art leanings and kept their children educated in cultural activities as well. A good student, Hopper began showing artistic promise at age 5. 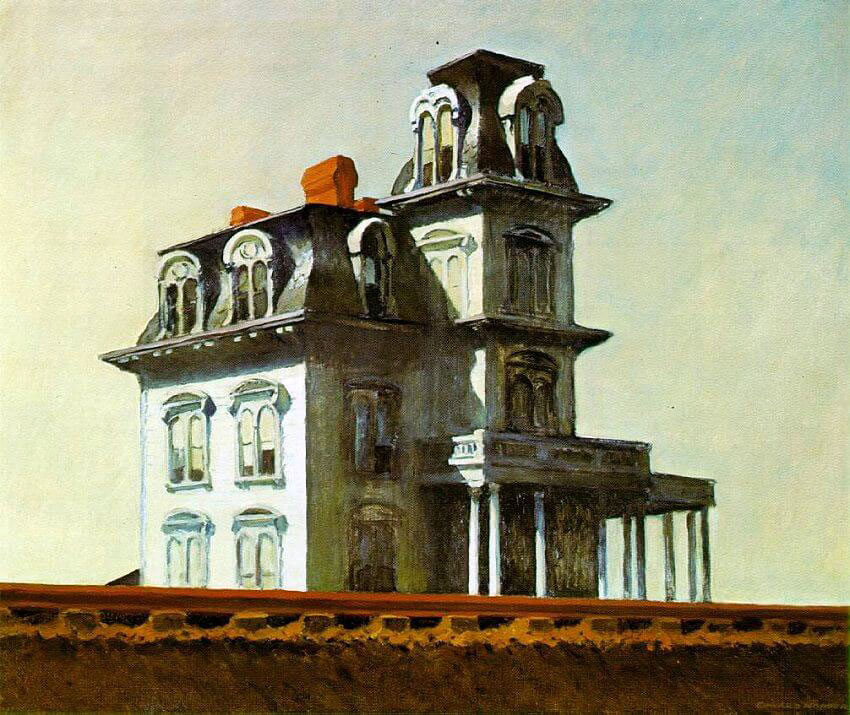 Pictured is a photo of a painting by Edward Hopper titled “The House by the Railroad.” This painting was used as inspiration in Alfred Hitchcock’s famous thriller, “Psycho.” Photo provided.

By his teen years he was familiar with pen-and-ink, watercolor, charcoal and oil paint. He chose subjects in nature along with political cartoons. He did many self-portraits and paintings but his parents were concerned about the possibility of “starving artist” in his future. They persuaded him to obtain training in commercial art whereby he could provide an income for himself. Once accomplished in commercial art, he attended the New York School of Art and Design. He studied and also began working under the tutelage of William Merritt Chase as well as Robert Henri. Like many of the artists in the Group of Eight and the Ashcan artists, Hopper began working for an agency. He created designs for the cover of many trade magazines. He came to dislike this type of work but stuck with it for the pay.

Hopper became recognized for his ability to depict the loneliness of individuals who were in seemingly busy settings surrounded by others, yet isolated in the midst of teeming activity. He forced viewers to develop their own perspective and understanding of the situation in which the subject existed. Even a lonely house separated from the viewer by a slice of railroad track became a famous work. “House by the Railroad” was such a painting. It was even used as a model and inspiration by Alfred Hitchcock in the jarring movie of 1960, “Psycho.” This painting is now held by the Museum of Modern Art in its’ permanent collection.

Hopper’s talent lent itself to leaving his audience with clues they had to decipher in order to complete the idea of the painting. His painting automat not only gave a glimpse into Hopper himself, who was considered somewhat antisocial and what we today might call “a loner,” but pulls a sympathetic chord in the viewer as we view the lonely woman looking down into her cup of coffee. We sense her isolation from her surroundings. This type of mood in his work became his specialty.

• Lastly, the Warsaw City Hall Art Gallery has reopened with an exciting exhibit by Christi Ziebarth. Hours are from 8:30 a.m. to 4 p.m. Monday through Friday.

Contact me with questions or comments at [email protected]