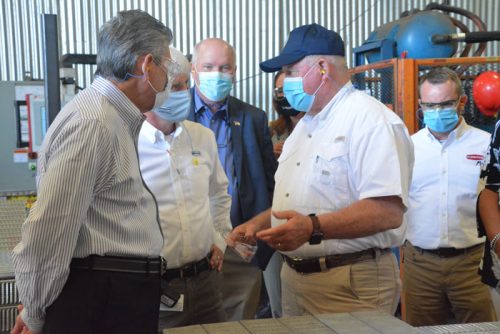 MILFORD — It’s not often that a member of the President’s cabinet comes to Kosciusko County, much less the small town of Milford. That was the case on Friday afternoon, however, when the Honorable Sonny Perdue, United States Secretary of Agriculture, spent a few hours at CTB, Inc. He was joined by Second District Congresswoman Jackie Walorski, as well as Indiana State Department of Agriculture Director Bruce Kettler.

A detailed tour of CTB’s manufacturing operations was given to the VIPs by Steve Homme, business support group manager for CTB. Homme explained the manufacturing process of some of CTB’s most popular products that are well known in agriculture circles around the world.

Following the tour, the trio of dignitaries went across the street to CTB’s spacious conference center for a town hall meeting focused on agricultural and manufacturing issues. Guests from across the agricultural spectrum, including manufacturers, farmers and other interested parties spent time approaching the dais to ask their specific questions. Perdue, Walorski and Kettler were joined at the head table by Vic Mancinelli, chairman and CEO of CTB. Questions ranged from federal and state legislation to pointed questions about manufacturing and agriculture.

Perdue, who also served eight years as the Governor of Georgia, noted during the town hall that he grew up on a dairy farm in his home state and had several Brock bins on his family’s land. “It’s a very reliable product,” he proclaimed to the audience. 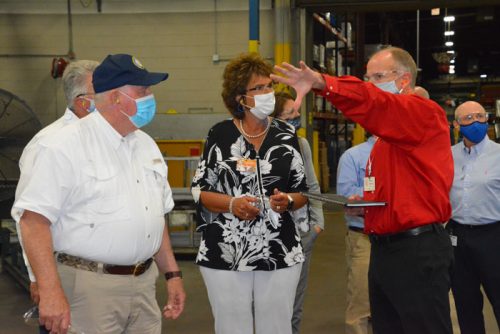