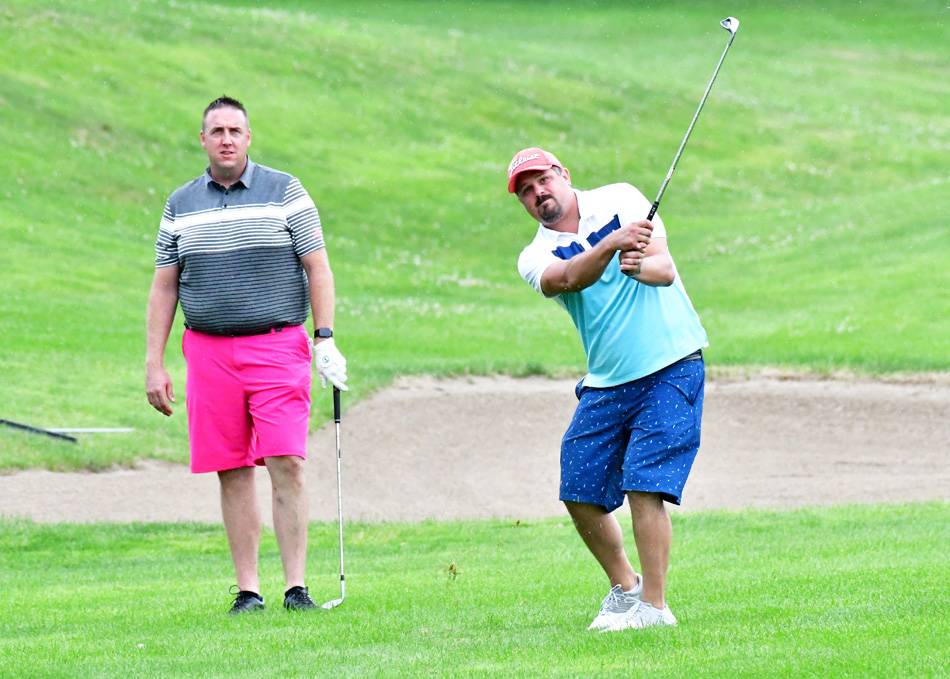 Chandler Tenney fires his approach shot to the green on the 18th as teammate Andrew Packer looks on during Monday’s Conrad Golf Classic at Maxwelton Golf Club. InkFreeNews photo by Mike Deak

SYRACUSE – If ever there is a need to have a memorial-type fundraiser, the hope is to carry it on with the same or better success than the year before. The Conrad Golf Classic is doing just that.

In its fourth year, the golf outing was held Monday at Maxwelton Golf Club, familiar ground for the Conrad family and its golfing history. The event carries significant weight with the partisan-Syracuse community as it honors a pair of its own in the late Kim and Stephen Conrad, who passed away in a car accident on Christmas Day in 2016.

In remembrance of their vivid and caring souls of their loved ones, Michael and Katie Conrad, along with a host of friends, have put on the Classic as a scholarship fundraiser for Wawasee High School students. With the intent to help those getting into a career in education, as Kim held, or those who participated in basketball or golf, like Stephen did, or gymnastics or cheerleading, which Kim coached, its intents are as true in 2020 as they were in 2017 when the outing was designed. 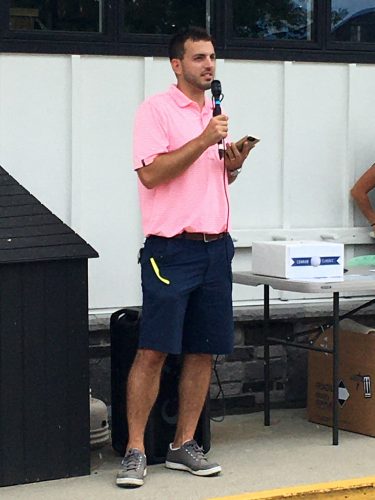 Michael Conrad addresses the afternoon round of the golf scramble at Maxwelton.

Wearing a bright pink shirt Monday afternoon, Michael greeted golfers with an enthusiasm he has always had. The middle son of Steve and Kim, Michael and his wife have become the faces of the event. Jeffrey, the youngest of the three children, assumed his role of staying relatively quiet in the background and did more of the golfing than the fraternizing. In fact, his morning and afternoon teams were both event champions. Jeffrey teamed with Brady McKibben and Ben Jackson in both rounds, and with Trevor McKibben in the morning and Austin Bender in the afternoon.

The morning session had 12 teams and the afternoon nearly doubled with 23, which included contest holes for closest to the pin on three, eight and 13, and men’s and women’s longest drives on six and 14.

“It’s been pretty steady year after year,” noted Katie Conrad before the start of the afternoon session. “We’ve noticed the outing has gotten more lucrative the last couple years as more people hear about it. It says a lot about this community and the people who are a part of it.”

The Conrad Golf Classic has grown with its purpose in the scholarships. In 2019-20, the event was able to produce eight scholarships to Wawasee graduating seniors, which was four times as many as it created in its first year in 2017.

Part of its generation is the aforementioned community involvement. The 140-plus golfers certainly help, but the Classic also benefitted from nearly two dozen event sponsors as well as a host of anonymous helping hands. Part of what made Kim so well-known and liked was her willingness to donate time, energy and support, to which Katie and Michael are now doing in their own way.

“To see this all come together as it does, it’s just really cool,” Katie said, holding back some tears. Michael also expressed his heartfelt gratitude at the onset of the afternoon session, referring to his mom and brother as Kim-bo and Steve-O. “It’s more than just the support, it’s the love that comes with this. You don’t get that in every community. We feel that here. We want to keep this going year after year. This is really a special thing.”

Kim’s catchphrase of “It’s All Good” still holds a special place in the hearts of those who know her, and adorns much of the representation of the Conrad Golf Classic. As she and Stephen looked down on the golf course they spent a lot of time at, very likely she reiterated those words as her family and companions carried on the Conrad’s legacy.