INDIANAPOLIS – The state of Indiana will not advance to phase five of the Back on Track reopening plan, citing an increased number of hospitalizations of patients testing positive for COVID-19. Governor Eric Holcomb announced Wednesday the state will remain at 4.5 at least through the end of July. 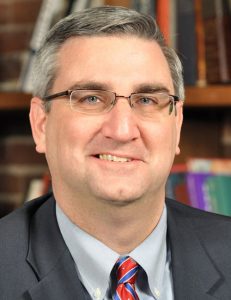 “It’s a very volatile environment out there, not just in our state, but surrounding our state, around the country,” explained Holcomb. “So, we’re going to lock in at 4.5. We’ll be here at least – I underscore at least – another two weeks.”

Two weeks ago, Holcomb announced Indiana was hitting pause on the reopening plans. While the administration had hoped to move the state to the next level, Holcomb said Wednesday the data does not support that.

The state has recorded, for the second week in a row, an increasing number of positive cases. In the past week, there were 4,300 new cases, compared to 3,000 during a seven-day period a month ago.

“We also continue to continue to see increased hospitalizations for COVID-19. On June 26, 595 individuals were hospitalized with COVID-19 yesterday, that number was 881,” explained Indiana State Department of Health Commissioner Dr. Kris Box.

Box said the state continues to ramp up testing capacity with the opening of 11 more testing sites.

“While we continue to increase our testing capacity, we’re having to adapt to the supply and demand issues that have been created by the significant spikes that we’ve seen in other states across the country.”

Box says the spikes have impacted the state’s ability to get some supplies, which was a benchmark the state is using to determine the reopening and resumption of businesses and activities.

“It has also increased the wait time for our lab results in many cases, we know residents are experiencing longer waits to get their test results,” said Box.

When asked whether the state will mandate the wearing of masks, Governor Holcomb said he and his team continue to leave it as a local decision.

“We’re not looking at the one size fits all approach right. I won’t rule it out long term,” said Holcomb. “We’re in a state where the numbers could be very different county by county and region by region, so we’re comfortable where we are right now.”

But the governor warns if Indiana’s numbers increase dramatically, such as in Texas or Florida, the state may need to mandate masks statewide.