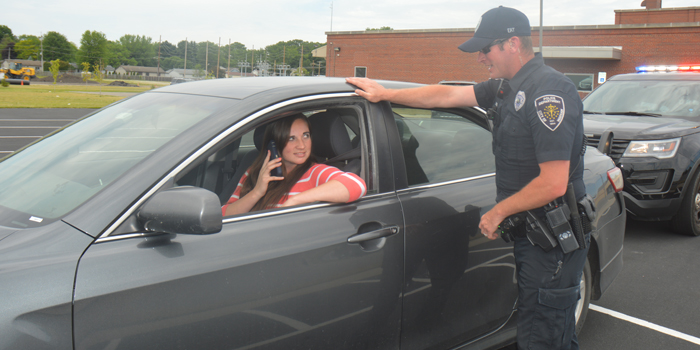 WARSAW — It’s time to put the phone down if you are driving.

Anytime a driver has a phone or other device in their hand while a vehicle is running, the driver will be breaking the law. If a driver does, he or she will be faced with a class C infraction.

If drivers get pulled over for breaking the law, they will be fined. Fines could range from $25 to $500, depending on the county prosecutor.

Detective Sergeant Brad Kellar, public information officer for the Warsaw Police Department, said the new law is “all about safety on the roadways.”

“The more we can remove distractions, the safer everyone will be,” Kellar said.

“We urge drivers to abide by the new restrictions because the ultimate goal is increased safety on our roadways,” said Chris Francis, public information officer for the Kosciusko County Sheriff’s Office.

Indiana is now the 22nd state to prohibit drivers from holding or using a handheld mobile device while operating a motor vehicle.

“As drivers, we all have a responsibility to our fellow Hoosiers to limit eye and hand distractions that can result in tragic injuries and deaths,” said Gov. Eric Holcomb in a press release. “This law is about protecting those who travel our roads and those who build and maintain them by preventing as many crashes as possible through smart education and enforcement.”

According to the state’s website, drivers can experience three types of distractions:

Operating a handheld cellphone while driving enhances the likelihood and consequences of all three of these distractions.

Distracted driving increases the risk of a crash more than threefold and causes about 10,000 automotive accidents in Indiana each year. It is 2.5 times more common than drunk driving accidents and is the leading killer of teenagers in America.

Each time a driver looks at a handheld cellular phone, he or she does so for an average of 4.5 seconds. At 55 mph, that is the equivalent of putting on a blindfold and driving the length of a football field.

Gov. Eric Holcomb signed into law House Bill 1070, which addresses distracted driving. Exceptions are using hands-free or voice-operated technology such as Bluetooth, or using the device to call 911 to report an actual immediate emergency.

Indiana’s Distracted Driving Law is considered a primary law, allowing a law enforcement officer to pull over a driver and issue a citation merely upon witnessing a violation of the law. No other reason is necessary.

Violations are punishable by a fine, but ticketed drivers will not receive points on their license before July 1, 2021.

“Education will be key and the statute will initially ease the penalty for drivers who are caught disobeying the law,” said Kosciusko County Prosecuting Attorney Dan Hampton.

“The enactment of this law provides law enforcement with an important tool to ensure safe operation of vehicles on the road. Through news outlets and other mechanisms of notifying the public, drivers will soon become aware that handling their cell phones while driving is no longer acceptable, and they will transition to ‘hands-free’ options, which are really available. The new ‘hands-free’ requirement will help keep drivers’ eyes up and focused on the road and their surroundings,” Hampton said.

The bill’s author, State Rep. Holli Sullivan (R) hoped police officers, in the first year, will issue written warnings rather than citations to help educate the public. She did, however, emphasize the importance of the legislation.

“Distracted driving kills, and we need a cultural shift to save lives,” said Sullivan. “Most of us are guilty of using our phones while driving. We all need to do a better job of putting our devices down and focusing on the road.”