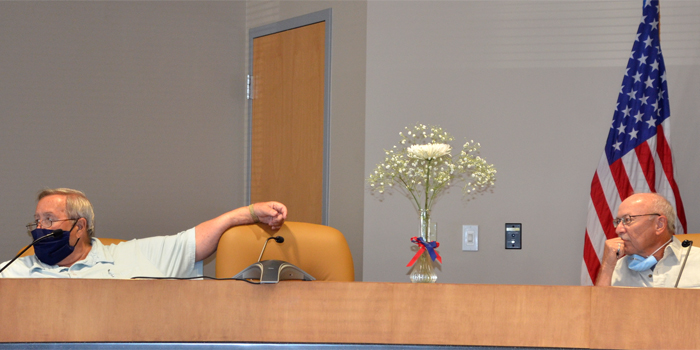 WARSAW —  The Warsaw Parks & Recreation Board meeting began Tuesday, June 16, with board members expressing their condolences over the recent passing of Board Member Bill Baldwin.

Baldwin passed away May 26, in St. Joseph Regional Medical Center in Plymouth. 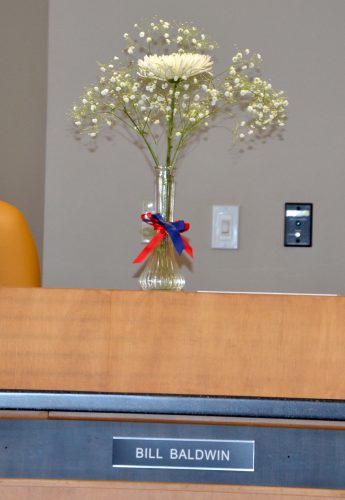 A memorial was placed at Bill Baldwin’s seat during the parks board meeting.

He spent his childhood in Carteret, N.J., later moving to Spring Lake Heights, N.J., at the Jersey Shore. Baldwin relocated to Warsaw in 1974.

Baldwin served the Warsaw parks department for about 20 years, according to Warsaw Parks Superintendent Larry Plummer.

Baldwin was also the parks board representative on the Plan Commission.

“He was very passionate about our parks, the future of them,” Plummer said.

Councilwoman Diane Quance described Baldwin as “such a gentleman.”

“He will be dearly missed by family and friends along with the community as a whole,” Plummer said.

Baldwin’s wife, Gretchen, donated a tree to be planted in memory of her late husband, Plummer said. The tree, a pine, has been planted at McKinley Park.

“We would like to send our sincere condolences to Bill’s family at this time and thank him for his service to the community,” Plummer said.

“Bill is gonna be a hard man to replace – not just on the park board, but anywhere he served,” said Warsaw Parks Board President Steve Haines. “He was a good man.”

Budget funds were also reviewed and approved at the meeting.

Plummer provided board members with documents that included information about the operating budget for 2021.

Plummer gave an update on the Central Park Master Plan, reminding board members that the original plan involved putting the maintenance facility at Fort Wayne and Indiana streets and the park offices inside the pavilion.

A change has been made, Plummer said, with the park offices being incorporated into the maintenance building at Indiana Street.

With this change, the pavilion will not need to be extended 15 feet out to the water. Plummer said the new plan will also allow for a better lake view from the pavilion.

The change in location will make the offices more accommodating for the public, Plummer said, and will allow office staff to be closer to maintenance staff, leading to better communication.

Plummer said he will have the new drawings by the next meeting and will share them with board members at that time.

The parks department received a $3,000 grant through the Kosciusko County Community Foundation from an anonymous donor due to the work done by the recreation staff during the COVID-19 pandemic and the maintenance staff for helping place the new art sculpture at Warsaw City Hall. Plummer said they plan to use the money for tree replacement.

As far as reopening, Plummer said, the parks and greenways have been open with social distancing in place. The campground is open. Beaches, playgrounds and basketball courts opened as of last weekend. The park office is open to the public, with masks encouraged. Shelter rental is available at this time at 50 percent capacity. Rental facilities will be available starting July 4, with reduced occupancy. Tennis courts and pickleball courts are open.

The plan remains tentative in case there is another coronavirus outbreak, Plummer said. “This is the plan going forward, but if the numbers get bad, we may pull this back.”

Parks Recreation Director Sheila Wieringa said the department had to do “a ton of brainstorming” to come up with programming ideas that would keep people safe.

“We decided we will not be having any programming in the building themselves,” Wieringa said. “Everything is virtual.”

Many of the programs involve take-home kits. Everything is open for registration at this time, Wieringa said. 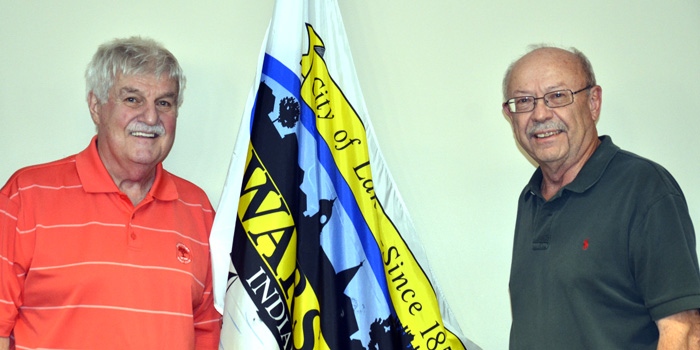 A 2018 photo of Board Member Bill Baldwin, (L) who recently passed away, and Parks Board Vice-President Larry Ladd, (R).