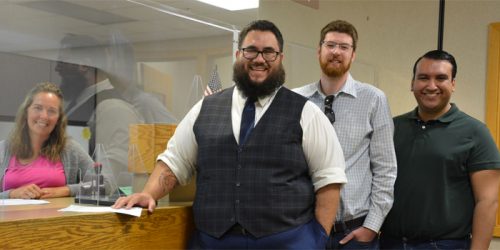 WARSAW — Democrats in Kosciusko County have another candidate for the general election.

He’s the third Democrat to announce campaigns for county-level seats in recent weeks. He and Noemi Ponce, who announced her campaign a day earlier, will both appear on the ballot. Democrat Travis McConnell is running for middle district county commissioner.

Morales and Ponce will challenge three Republicans on Nov. 3.

Morales is a 31-year-old Warsaw resident. He is married and has two daughters.

He operates a nonprofit organization, ‘Not Easily Broken Missions,’ which he founded five years ago. The organization offers free or low-cost relationship skills training. (https://nebmissions.org)

Morales, who is originally from Los Angeles, came to Warsaw to attend college. He studied communications in undergrad and then got a Masters in clinical mental health counseling (CMHC) from Grace College.

“I’m excited to run and excited to serve and to highlight the service aspect of public service,” Morales said. “I want to be an asset to the community.”

Morales said attended the most recent protest over the death of George Floyd on June 8 in Winona Lake and spoke at the event. Floyd’s death in Minnesota has sparked protests across the country and various parts of the world in a call for an end to police brutality.

“One thing I saw was a voice that was rising up from our community — young people, minorities — and they want to speak and they want to have their voice heard and acted upon,” Morales said.

Morales said he recently attended a county council meeting and noticed that there aren’t a lot of young people on the council.

“As a person who represents a pretty wide variety of demographics, I just want to bring those flavors to county council and help broaden the kinds of people that our citizens can see represented in their government,” Morales said.

Morales said he wants to hear what the community has to say about what’s important to them.

“I definitely want to reach out to the community, and that’s going to be a big part of my campaign — is me going to them instead of inviting them to come to me,” Morales said. “And I really look forward to conversations with as many constituents as I can find.”