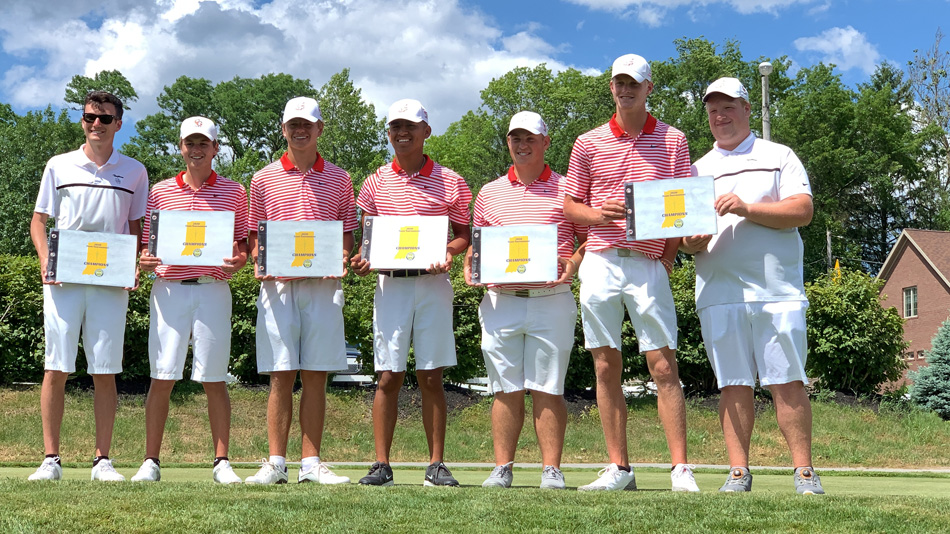 WEST LAFAYETTE – It’s become the last unofficial official high school contest of the 2019-20 season, and Center Grove gets to have the bragging rights that come with winning a championship.

The Center Grove Legacy team shot a 306 Thursday at Purdue’s Ackerman golf course to hold off Straight Off The Couch, comprised of Carmel area golfers, to win by a stroke, 618-619.

The 2020 Boys Team Finals, hosted by the Indiana Golf Association, was a two-day showcase of several of the top teams from around the state. Each of the 18 teams had to qualify from six regionals on Monday.

Last Dance, made up of Penn players, dropped four spots from third to seventh with its 322 on Thursday and 638 for the tournament.

TRC, made up of two golfers from Tippecanoe Valley, two golfers from Manchester and one from Triton, held its spot to claim eighth. TRC shot a 312 on Thursday, the fifth-best score for the day in the field to finish two shots back of Penn. Columbia City shot a 325 to finish with a two-day score of 655 and 12th place in the 18-team field.

For the TRC, Valley’s Greg Miller made the biggest improvement over the two days, showing a 14-stroke jump to shoot a 77. Miller’s teammate, Cade Brouyette, finished his high school career with a 79. Triton’s Cole McKinney rallied on day two to scrap just three bogeys to finish with a team-best 75. Harley Kruschwitz and Owen Kruschwitz, brothers from Manchester, both shot 81 in their final go-round as teammates.

Stillson Makes Move At State Am

NorthWood junior Cybil Stillson rallied after a tough day to move up the leaderboard at the IWGA State Amateur Championship at Old Oakland Golf Club in Indianapolis.

Stillson dropped eight strokes from her Wednesday round to post a 76, just four-over for the day on Thursday. Stillson had just two bogeys on the front nine, then countered three bogeys with a birdie on 12 to help her cause. She sits in a tie for 30th place heading into Friday’s final round.

Penn graduate Julia Porter-Bobb is currently tied for the lead heading into the final 18 holes, sitting atop the board with Cailyn Henderson and Erica Shepherd. Porter-Bobb shot a 70 for the second consecutive day to sit at four-under for the tournament. Henderson had the round of the day with a five-under 67 to join Shepherd and Porter-Bobb, which both were tied for the lead after Wednesday’s round.

Kendallville’s Katie Sharp is tied for 17th after a 78 on Thursday while Peru’s Brandi Jones is sitting in 23rd.

The final round of the Amateur Championship begins Friday morning.