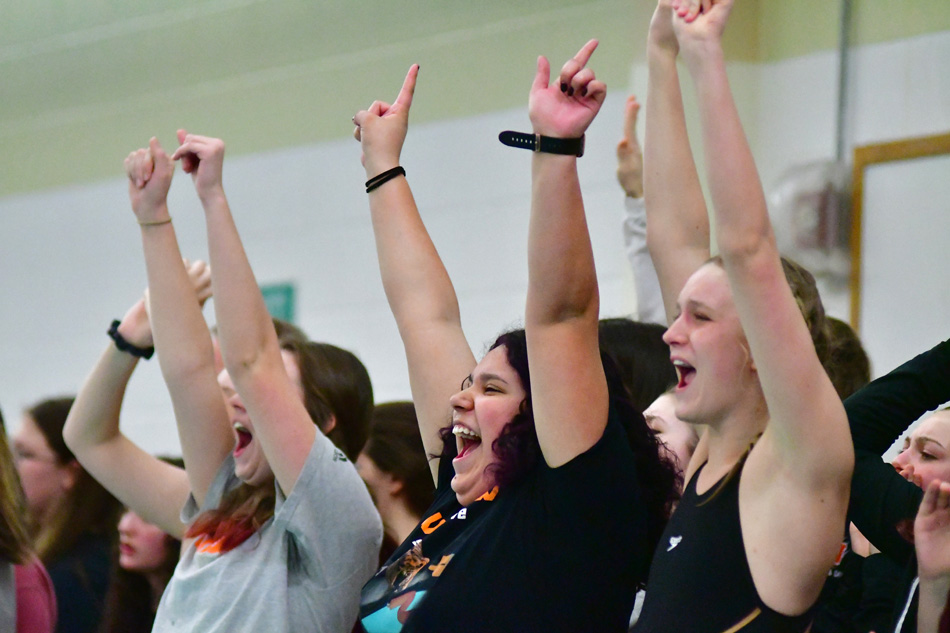 There were reasons to celebrate at Warsaw and elsewhere this past athletic season. We look forward to doing this again real soon. InkFreeNews file photo by Mike Deak

WARSAW – Normally at this point of the athletic calendar, this space would be reserved for full-year dialogue. And it still will be, it just won’t be so normal.

By now, if you haven’t figured it out, the sports world has been just a little weird. We went from 3,000 people hi-fiving at basketball games to three people in big, socially-spaced circles wondering if it’s OK to bump fists. From sports conversations about whether LeBron and the Lakers are the best to Sunday nights seeing why Michael Jordan and the Bulls were the best ever. From “pre-sale tickets are on sale starting Tuesday at the athletic office” to empty stadiums in Darlington and across the Bundesliga.

It seems like years ago when NorthWood boys basketball was pulled off their regional-bound bus and told there was no Saturday showdown with Norwell in New Castle. Their win over Wawasee in the sectional championship on March 7 was the last sporting event I personally covered to date. Little league baseball next week is going to end a streak of nearly 100 days of work doldrums. Working six days a week was the norm, seven if you include NorthWood’s state championship run in girls basketball.

This space normally would be where we start breaking down the Top 10 athletes and teams over the course of fall, winter and spring sports, this for the 2019-20 season. And we did that for the fall and winter. And did our best to highlight a host of spring athletes and the what-could-have-beens. The IHSGCA did their best to at least offer something, and did so with the individual and team boys golf events it has hosted over the past week.

When we look back on the past athletic year, it will predominantly be remembered for the pandemic. For Rudy Gobert touching phones. For college basketball teams pulling their teams out of games at halftime of their conference tournaments. For a term dubbed “Zoom calls” and the incessant Microsoft Teams commercials. For yard signs representing three-plus years of baseball, or softball, or golf, or track, or tennis legacy, saying “Here lives our athlete, who is in the yard making TikTok videos.“

But before all of that, we had championships. For our high school coverage area including Warsaw, Wawasee, Triton, Tippecanoe Valley, NorthWood and Lakeland Christian Academy, there were 12 sectional team champions across the fall and winter seasons. Warsaw’s two cross country teams won sectional and regional titles and both NorthWood’s boys tennis and volleyball teams advanced to the regional finals. We had watershed moments with Warsaw’s first-ever sectional football title and NorthWood’s second girls basketball championship.

Grace also celebrated its first golf national championship, the women winning the NCCAA title in the fall. The Lancers also championed its character with an international marathon fundraiser for COVID-19 relief that garnered national attention, and more importantly, $20,000.

There were plenty of reasons to celebrate, and surely, will be reasons in the future. The aforementioned little leagues are ready to start, and golf courses have been keeping the greens trimmed all spring into the summer. Professional leagues, like NASCAR, already have a jump on regaining normalcy. The NBA and NHL are on their way back, and both college and professional football have made advances in preparation to getting back on the field in a timely manner. The IHSAA is ready to dip its toes in the water July 1 and see what happens.

Fans? Well…ask your local health agency their opinion. It literally varies from town to town. And by tomorrow, it could change again.

One thing that has stood out to me about this past sports season is the word ‘resilient’. Some of the premier programs in the area didn’t get where they wanted to go and ended their seasons with a loss. In nearly every case, their coach said something to the effect of “we’ll be back.” And I wouldn’t doubt it. As I have thought in recent weeks about how America responded to 9/11, I always think about a week after the tragedy when George Bush threw a strike at the Yankees game.

While our country is still working through the pandemic and now racial equality, I again think about the word ‘resilient’. Adversity shows ability as one coach told me growing up, and how we handle it is how we grow.

I tend to follow that model. Life has changed. Sports, and sports departments, have changed. Attitudes and demands have changed. Normal is not normal. Sports will likely look different in the fall, whether we are allowed into the games to see them, or if they are even played at all. How we adapt and how we move on is how we deal with the adversity. We’ve risen above it before, we can rise above it again.