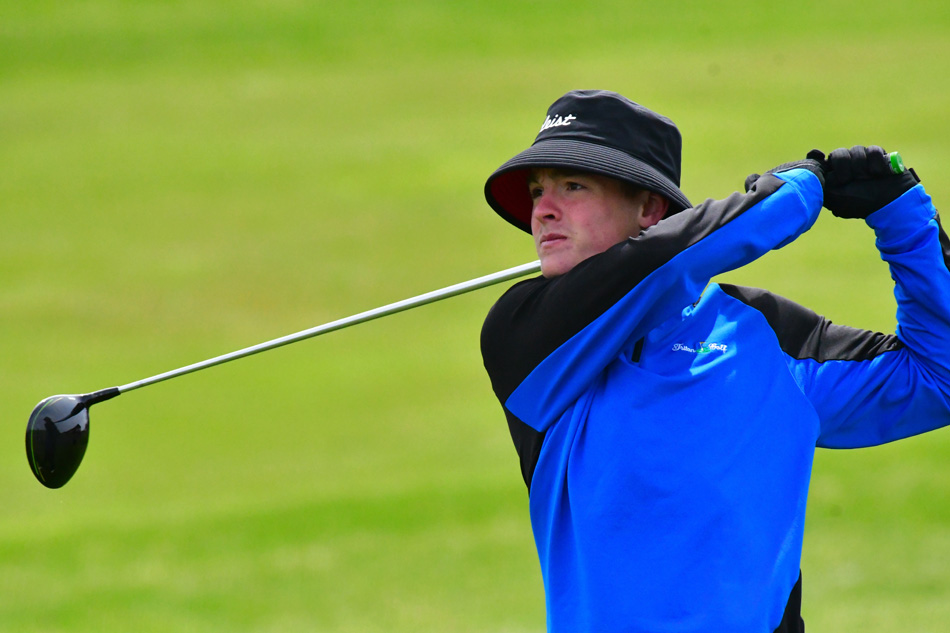 Cole McKinney and the TRC team are tied for 8th place at the 2020 Boys Team Finals at Ackerman Golf Course. InkFreeNews file photo by Mike Deak

WEST LAFAYETTE – State bragging rights are on the line as the Indiana Golf Association is hosting its two-day ‘state championship’ 2020 Boys Team Finals boys golf event Wednesday and Thursday at Ackerman Golf Course on the campus of Purdue University.

Among the contenders are three area teams, including “TRC” made up of Tippecanoe Valley’s Cade Brouyette and Greg Miller, Triton’s Cole McKinney and Manchester brothers Harley and Owen Kruschwitz.

TRC is sitting 16 shots back of the lead after the first day, posting a team score of 328 and tied with two other teams for eighth place. Owen Kruschwitz led the team with a 79, and back-to-back birdies on 11 and 12 helped Brouyette to an 80. Harley Kruschwitz was right behind at 81, McKinney gave the fourth score at 88 and Miller had a 91.

Penn’s Last Dance team is tied for third at 316, staring up at Straight Off The Couch’s 314 and leader Center Grove Legacy in first at 312.

Columbia City’s squad is tied for 12th place with a 330 after the first day.

The championship round begins Thursday morning at Ackerman.

A star-studded field has some of the top Hoosiers in women’s golf battling it out at the Indiana Women’s Golf Association State Amateur Championship.

Day one of the three-day tournament at Old Oakland Golf Club in Indianapolis has a trio of Division 1 college golfers tied atop the leaderboard. Penn graduate and University of Missouri star Julia Potter-Bobb is sitting at two-under after shooting a 70. Potter-Bobb is locked in with future Clemson Tiger Annabelle Pancake and Duke Blue Devil Erica Shepherd also turned in 70s in the first round.

Several local ties are among the 90-plus golfers in the field.

Three from Nappanee are involved, including sisters Summer and Cybil Stillson. Summer, playing at Holy Cross and a NorthWood graduate, shot an 83, putting her 11-over and tied for 44th in the standings. Cybil, a junior at NorthWood, is one shot back of her sister and tied for 50th. Cybil’s teammate and classmate, Breanna Goss, had a tough day and posted a 96 and sits 82nd.

Grace College NCCAA hero Lucy Young finished her first round with an 82 to sit tied at 41st.

Northridge graduate Braedyn O’Dell was one shot back of Cybil and had her 85 put her tied for 56th.

Two area golfers are inside the top 20. Kendallville’s Katie Sharp shot a 77 to sit tied in 14th while Peru’s Brandi Jones is one back of Sharp and sitting tied for 17th.

Day two resumes Thursday morning with the second round at Old Oakland.