I’m not sure how Democrats would have handled a similar situation, but from what I saw Thursday night at the GOP dinner in North Webster, conservatives are not big fans of wearing masks.

The dinner attracted 130 guests and continued for more than three hours but only about half a dozen or so people were wearing masks. 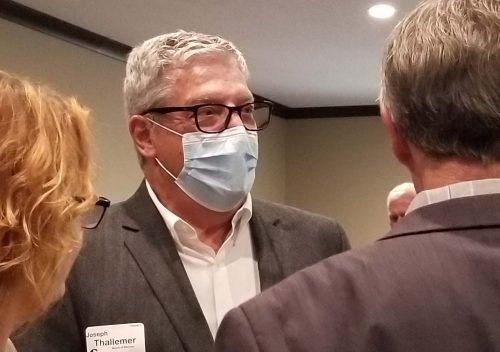 Party organizers get a thumbs up for preparations, though. Volunteers took temps of everyone as they arrived at The Owl’s Nest. Tables were spaced out more liberally and limited to six people per table. Hand sanitizer was readily available, too.

Oddly enough, the wearing of masks appears to divide Americans along political lines and that might be the case in north-central Indiana.

I wore a mask because I have asthma but was left feeling apprehensive about the circumstances and I’m sure others did as well – especially since the number of cases in Kosciusko County has spiked in the past few weeks as businesses begin to reopen.

Jean Northenor, the former GOP chair, lamented the restrictions instituted by Gov. Eric Holcomb, while introducing former Congressman Todd Rokita. She questioned whether her constitutional rights “have been bent around a little bit” lately.

“I don’t know anybody that has the right to tell me to stay home, don’t go anywhere and only go if I say it’s ok,” Northenor told the crowd.

She added, “If we followed every darn rule there is out there, we’d probably stay home and suck our thumbs tonight.”

On the other hand, Warsaw Mayor Joe Thallemer, a strong proponent of the masks in public, was there and wearing a mask. He gets bonus points for walking the walk after talking the talk.

Kosciusko County was the first such county to host a Lincoln Day dinner in Indiana since the pandemic settled in two months ago. Organizers were eager to host the event, which had been postponed earlier. The food was excellent and the politics were simmering with excitement, but as for whether they pushed the envelope a bit too early, only time will tell.

TRUMP TALK – Attorney General candidate Todd Rokita was introduced by longtime friend and supporter Jean Northenor at Thursday night’s dinner. They might agree on many things but had different critiques over watching President Trump during his daily coronavirus news briefings. Northenor said she likes what Trump has done, but got tired of the TV briefings. Rokita differed on the daily updates.

“I do love seeing him on TV every night … he’s doing a great job. He’s given the confidence, along with the vice-president, to work through this,” Rokita said.

MISSING ASPECT? – Kosciusko County Dem Chairman Brian Smith took exception to Rokita’s claim about voter fraud in his speech Thursday night and put things into perspective. You can find his thoughts in his letter to the editor. 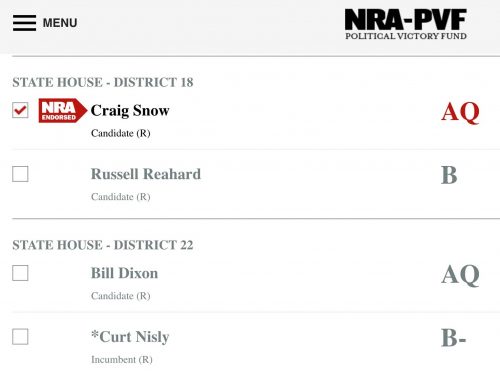 GUN RATINGS – Want to know how your local state rep candidates fare on guns, according to the National Rifle Association? The chart to the right is from the NRA Political Victory Fund. An AQ rating is given to candidates who are viewed as pro-gun and the assessment is based solely on responses to the NRA-PVF candidate questionnaire because they do not have a voting record on Second Amendment issues.

HOLLAR DOWN THE ROAD – The simmering talk of Steve Hollar someday getting more involved in politics was reinforced Thursday night when GOP Chair Mike Ragan teased the GOP crowd about the local dentist who starred in the movie “Hoosier’s,” suggesting Hollar might someday run for office. I’m guessing his name is destined to show up on a ballot eventually.

MCCONNELL  JUMP START– Local attorney and Democrat Travis McConnell is launching his bid to challenge incumbent Cary Groninger in the fall election for the middle district county commissioner’s seat. He’s hosting a kick-off event at The Vic Friday, June 5, starting at 6 p.m. He’s seeking $100 contributions. Space is limited due to the pandemic. For more information, call (888)-888-8980.

JUDICIAL PAY – With all the interest in the Kosciusko County Superior Court 3 race, some have wondered what the salary is for that job. Turns out all judges in general jurisdiction courts make the same amount. According to Judicial Salary Tracker, the wage, as of July of this year, will be $156,125. You can see the rankings of how that compares with other states (for current salaries) with this table.

STILL IN THE GAME – Former city councilman Kyle Babcock has been quieter on the local scene in this election cycle, but not totally quiet. I confirmed that Babcock Is supporting Chad Miner’s campaign and was paid $11,000 for consulting in the Superior 3 court race for judge. Babcock was a staunch opponent of Mayor Thallamer’s re-election bid last year. 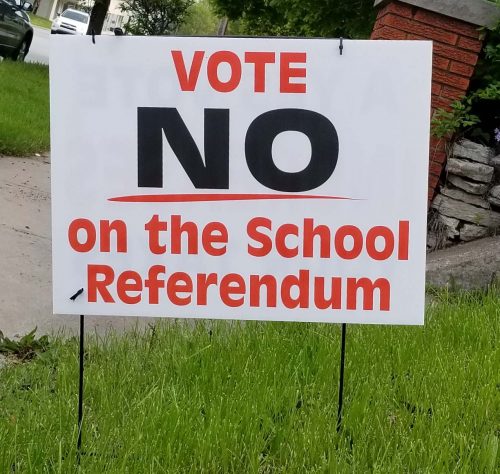 SCHOOL VOTE – There’s a $54 million school referendum on the ballot in South Bend Tuesday. With the economic crisis, I’m guessing taxpayers are in no mood for a tax hike and will defeat it by a large margin.

BAUER’S SEAT  – Former Indiana House Speaker B. Patrick Bauer’s seat is up for grabs this year. One of the candidates is Maureen Bauer, the daughter of Patrick. The younger Bauer, who is 35, is running against two others who are 27 and 31, according to a report in the South Bend Tribune.

CROWDED FIELD – The most hotly contested Congressional race in Indiana is in the 5th District where Republican Susan Brooks is retiring. Fifteen Republicans and five Democrats are running.