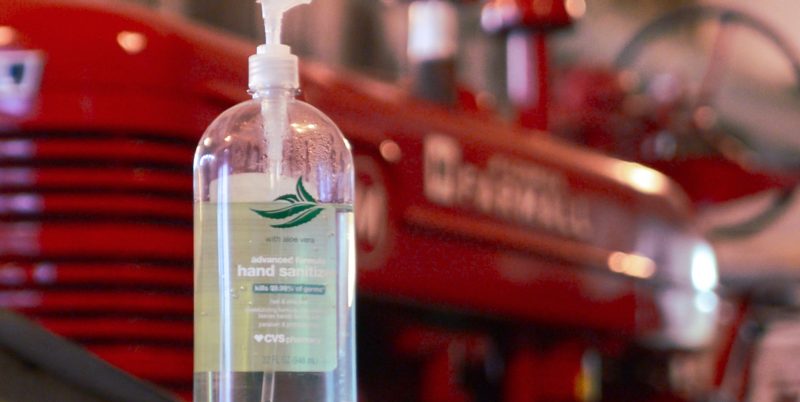 A big bottle of hand sanitizer sits in front of an antique tractor inside the entrance of Creighton’s Crazy Egg Cafe and Coffee Bar  Monday, May 11, in Warsaw. The restaurant was among many that resumed dine-in service Monday, May 11. InkFreeNewsPhoto by Briley Gargis.

WARSAW – It did not take long for Table Ten to fill up at Creighton’s Crazy Egg restaurant Monday morning.

But the other 11 tables, generously spaced out inside the dining area, did not fill up as quickly. 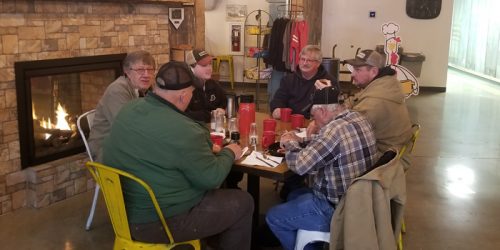 A group of regulars arrived early at Creighton’s Crazy Egg early Monday morning, May 11. Table Ten, where they normally sit, was moved into the entrance area and they told no more than six could sit at the table. InkFreeNews Photo by Dan Spalding.

Three Table Ten regulars – Mike Long, Jim Moyer and Ted Farr – arrived shortly before the official re-opening at 7 a.m. They were soon joined by three more at the table.

None of the first three expressed any apprehension about returning to the restaurant in light of the coronavirus. 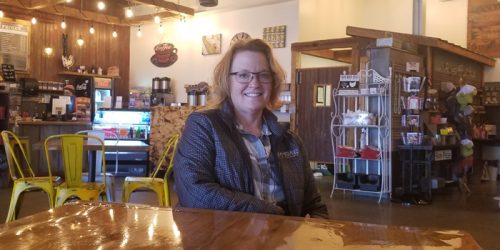 Mindy Truex, president of Creighton Eggs, sits inside the Creighton’s Crazy Egg Cafe and Coffee Bar Monday morning in Warsaw. She said she’s eager to see the restaurant begin getting back to normal. InkFreeNews photo by Dan Spalding.

Otherwise, the restaurant saw a slow start during the first few hours of business Monday – which surprised some people.

“I was a little concerned that we couldn’t get in – that the tables would be full,” said Mike Martin who arrived around 8 a.m. with his wife, Julie.

A large bottle of hand sanitizer greeted customers as they arrived. Waitresses wore masks and tables were void of condiments.

The large table in the middle of the room – known as the cattle feeder – has been removed temporarily. 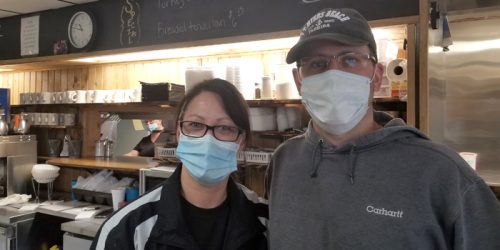 Misty and Robert Brown are pictured inside their restaurant, Cozy Cottage, on Market Street in Warsaw. InkFreeNews photo by Dan Spalding.

The Martins said they’ve slowly begun getting out of the house and doing things since the statewide stay-at-home order ended a week ago.

“In this environment, we feel very comfortable,” Julie added.

Mindy Truex, president of Creighton Brothers, which owns the restaurant, said she expected a slow start because Mondays are normally slow.

She said their attempts to provide carry out service during the statewide shutdown turned out better than expected, but that it’s been challenging to know what to expect.

“I don’t like to look at this as the new normal because I’d like to think that someday it’s all going to go back to place in here and people will mill around like they always mill around,” Truex said. “I’m just looking forward to the hum of customers coming back.”

Other restaurants opened Monday morning with owners facing a new round of uncertainty. Several said they’ve taken all the precautions expected under the circumstances – lots of cleaning and new routines for waitresses when they interact with customers.

The doors at Cozy Cottage swung open at 5 a.m. Monday and owners Misty and Robert Brown said they welcomed what felt like a close to normal flow of business.

What customers found was that every other booth was taped off and that all employees were wearing masks.

Misty Brown said the uncertainty during the past seven weeks has been difficult.

“It’s been really hard,” she said. “As the days go on, we’ll probably feel better seeing how things are going to go.”

At the American Table, on US 30 in Warsaw, owners have temporarily reduced their hours of operations to 9 a.m. to 7 p.m. in an effort to control labor costs until they see more clearly how things go.

“We don’t know what kind of volume we’re expecting right now,” said James Katris, who owns the restaurant with his brother, Chris.

On Monday, morning, American Table saw a steady stream of business, but it was still not normal.

Every other booth was closed off and customers are encouraged to use a QR code to see a menu on their cell phones.

Waitresses have had to “rethink” and set aside longtime habits such as refilling glasses.

“Going forward, it will be interesting,” James Katris said.